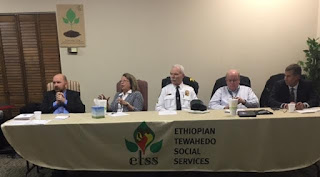 The Columbus Division of Police has assured residents of Columbus, Ohio, including refugees and immigrants that the police is not out to arrest people who are not U. S citizens or residents.
Representative of the Columbus Division of Police, Community Liaison Unit, Sgt. Ed Daniher told community leaders at the new Americans Community Leaders Impact Collaborative meeting that ‘the Columbus Police had never made immigration an issue in carrying out its legal duties.”
“It’s only those who are involved in activities that break the law that we go for. Our sole function is to enforce the law,” he stated.
He advised that report should be made to the police of any unusual activity or attack including hate crime by calling the non emergency line (614) 645-4545.
Other panel members at the meeting included Kathy Crandall, Director, Franklin County Homeland Security; Jeff Young, Director, Franklin County Emergency Management and Homeland Security; Gary Daniels, American Civil Liberties Union, CLU and Fred Bowditch, President, Bowditch Consulting.
The meeting, which was facilitated by the Executive Director, Ethiopian Tewahedo Social Services (ETSS) with focus on law enforcement and refugee-immigrant communities’ interaction discussed the right of individuals, what to do and what not in time of detention, arrest, or interaction with law enforcement.
Post Views: 1,310
Share!
Tweet