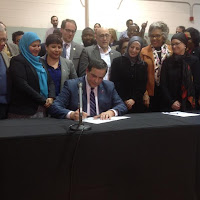 The Mayor of Columbus, Ohio, Andrew Ginther has signed an order reinforcing and expanding immigration policy in Central Ohio welcoming immigrants and refugees to the city.
At a well-attended ceremony by diverse citizens, and residents Columbus, Mayor Ginther said “Columbus is a city of immigrants and is open and safe to all immigrants and refugees.”
In a four-point policy, Mayor Ginther said “it shall be the policy of City of Columbus to actively support, to the greatest extent practicable, the placement or settlement in this jurisdiction of aliens eligible to be admitted to the United States as refugees.
“City staff are hereby authorized and directed to cooperate to the greatest extent practicable with federal and state officials in such placement or settlement.
“It shall be the policy of the City of Columbus to vigorously oppose any effort to require of local taxpayer resources for the enforcement of federal immigration policy,” he said.
According to him, “no city department or employee may use city moneys, equipment, or personnel for the sole purpose of detecting or apprehending persons based on suspected immigration status, unless in response to a court order.
“In furtherance to this policy, no city office or employee shall request information about or otherwise investigate or assist in the investigation of person’s immigration status unless a warrant exists, a criminal violation was reported, or an arrest was made,” he said.
Mayor Ginther stated that “no city department or employee shall deny equal access to city services based on immigration status unless required by law or court order. Such denial of access shall include, but shall not be limited to, soliciting immigration status in any application for city services; predicating the provision of services on the immigration status of any person, or denying the provision of services based solely on immigration status.”
Post Views: 1,332
Share!
Tweet