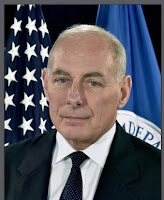 Posted by: Deba Uwadiae , January 30, 2017
The United States Secretary of Homeland Security, John Kelly has waived the ban on green card holders from the seven countries whose citizens were affected by an executive order signed at the weekend by President Donald Trump.
Some U.S. green card holders who were returning to the United States at the weekend from the seven affected countries – Iraq, Iran, Sudan, Somalia, Libya, Yemen and Syria – were detained and prevented from entering at some of the international airports as part of those being included by the executive order which bar citizens from the countries from coming to the U.S in the next 90days.
After several protests and demonstrations at many international airports against the executive order, the Secretary of Homeland Security, John Kelly said in a statement Sunday, January 29 that “in applying the provisions of the president’s executive order, I hereby deem the entry of lawful permanent residents to be in the national interest.
“Accordingly, absent the receipt of significant derogatory information indicating a serious threat to public safety and welfare, lawful permanent resident status will be a dispositive factor in our case-by-case determinations,” he added.
Also the Department of Homeland Security has stated that “upon issuance of the court orders Saturday, January 28, U.S. Customs and Border Protection (CBP) immediately began taking steps to comply with the orders.
“Concurrently, the Department of Homeland Security continues to work with our partners in the Departments of Justice and State to implement President Trump’s executive order on protecting the nation from foreign terrorist entry into the United States.
“We are committed to ensuring that all individuals affected by the executive orders, including those affected by the court orders, are being provided all rights afforded under the law.  We are also working closely with airline partners to prevent travelers who would not be granted entry under the executive orders from boarding international flights to the U.S. Therefore, we do not anticipate that further individuals traveling by air to the United States will be affected,” it said.
The DHS added that, “we are and will remain in compliance with judicial orders. We are and will continue to enforce President Trump’s executive order humanely and with professionalism. DHS will continue to protect the homeland.”
Post Views: 1,149
Share!
Tweet