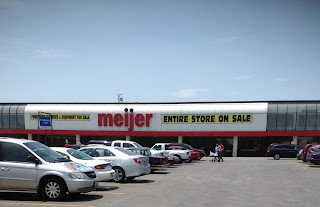 Posted by: Deba Uwadiae , November 22, 2016
*  To Build new $18.3 million Cleveland Avenue Huntington Gateway Center
*  To commit $300 million in focused lending
Huntington Bank has announced its intent to bring 1,000 new jobs to the City of Columbus by 2024, invest $18.3 million in a new 210,000-square-foot Huntington Gateway Center at 5555 Cleveland Avenue, and lend $300 million within Columbus low-to-moderate income neighborhoods over the next five years.

The plan incorporates targeted outreach strengthening the City’s Linden and Northland communities through development and lending investment.
Columbus City Council President Zach Klein joined Mayor Andrew J. Ginther and Huntington CEO Stephen D. Steinour at the announcement from the Huntington Gateway Center development site at 5555 Cleveland Avenue, a former Meijer store location.
“This is a win-win agreement for our community,” said Klein. “For the City of Columbus, it’s significant job growth at Huntington and infrastructure investment that will have a deep economic impact on this area of the city. For small business, it is a notable investment that will yield growth and spur job creation.”
“As we continue to grow, Huntington will continue to invest in Columbus by bringing 1,000 new jobs to the city and investing in neighborhoods where our colleagues and customers live and work,” Steinour said. “Columbus is our home, for the past 150 years, and we’re stepping up to help transform an important area because we believe in helping small businesses grow and families prosper. The city has been an outstanding partner and we’re proud to support the Mayor’s vision to revitalize key growth neighborhoods.”
Huntington’s $300 million lending commitment is composed of:
Huntington’s lending commitment is augmented by a $500,000 donation that the Mayor’s office and City Council will use to fund investment deployment in the Mayor’s priority neighborhoods.
“Huntington’s anchor development at this key gateway to Northland and Linden provides an enormous boost to the Cleveland Avenue corridor,” said Mayor Ginther. “The lending resources the Bank is committing are equally important to help small businesses and families in low-to-moderate income Columbus neighborhoods to create positive impacts in street-by-street improvements throughout our city.”
“Huntington is a loyal partner to the Northland community and surrounding areas,” said Emmanuel Remy, president of the Northland Community Council. “By establishing a major state-of-the-art office campus at one of our community’s most significant intersections, the company is at the vanguard of Northland’s diverse redevelopment.”
Huntington plans to complete the Huntington Gateway Center by mid-2017 and is seeking a city tax incentive in conjunction with increasing Columbus employment by 1,000 by 2024.
With the 2017 opening of the Huntington Gateway Center, the company will vacate the Morse Road Northland Operations Center it redeveloped in 2003-2004 with an $8.8 million investment at a time of city revitalization emphasis along that corridor. Huntington also will vacate Columbus offices at 7575 Huntington Park Drive in conjunction with the project completion. The company met its 2010 commitment to add 500 jobs within Columbus in 2015.
The Huntington Gateway Center will initially house approximately 1,400 Huntington colleagues with space for 1,600. Building design will maximize natural light exposure with an open floor plan featuring flexible unassigned seating, onsite dining and fitness amenities.
The building campus also will host a Central Ohio Transit Authority (COTA) CMAX Bus Rapid Transit hub as part of the Downtown Columbus-Polaris limited-stop Cleveland Avenue corridor project.
Huntington also will partner with the city’s Smart Columbus green transportation initiative by installing an electric vehicle charging station on the operations center site.
“We are very pleased to see our former site so positively reimagined,” said Hank Meijer, CEO of the Midwestern retailer. “We have a great business relationship with Huntington, and are pleased with their commitment to supporting the community and creating job opportunities through this innovative reuse of our former building.”
Huntington Gateway project partners include Integrated Design Group, Gilbane Building Company and AVI Foodsystems.
Post Views: 3,589
Share!
Tweet