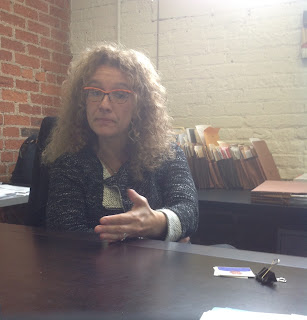 Inna Simakovsky, an Immigration Attorney came to the United States with her parents from the former Soviet Union in 1976 as religious refugees. Though life as a child of a refugee was a daily struggle, it never deterred her, but rather, sowed in her the spirit of advocacy, to help people, especially refugees and immigrants. Today, Inna, who grew up in Columbus, Ohio presides over a leading law firm on East Main Street, Columbus, Ohio.

I always knew I wanted to do some sort of advocacy. When you are a child of a refugee, it is very difficult. You see the struggle for daily existence; for daily assimilation. Do I stick with my ties; do I go forward? Everything is new.
I went to college. After college, I ended up in Washington DC, working for a law firm as a para legal. The law firm offered me opportunity to go to Russia. That was my first trip back to Russia in 1993.
After that experience I came back to Ohio State and went to Law School. I just fell in love with immigration law.
I graduated in 1998 and I’ve been practicing since then. I moved to Washington State, then to San Francisco, California; Maddison, Wisconsin. We came back to Columbus in 2004. I was hired to run a non-profit organization that did immigration. Then I opened my law firm.
Inspiration
I was inspired growing up in a refugee family, and seeing the struggle and being able to say well I can fix this part of it. I can be a voice for people that do not have a voice. I can help people navigate the immigration system. I can teach the right way to do it. I can help reunite families, I can help people get asylum. I have clients who come from countries that don’t treat their citizens well for various reasons. Being a former refugee, we were not treated well, and I can relate to what it feels like, coming to the U. S as a kid and growing up in the U. S system; I feel like have the best of both worlds. Because I know the struggle, I know how hard it is, but I have also assimilated enough to understand how the legal system works.
Immigration Attorney
The desire to become an immigration attorney, the desire to help has come from very deep rooted sense of the immigrant spirit. I love it. I love meeting people from all over the world. And I love helping them. Everyone comes to you, everyone faces some sort of immigrant’s struggle. Sometimes you act as a lawyer, sometimes you act as a social worker, sometimes you act as a teacher and sometimes you just act as a friend.
Challenge
The biggest challenge in the immigrant community is being able to work with the community and convince them that a lawyer is the appropriate person to handle a case.
A lot of the immigrant communities are used to a short cut.  Like you have someone offering services like teaching how to drive, taxes, electric bill payment and by the way, they do immigration also. The first challenge in the immigrant community is to say, look, the person that fixes your car might not be the right person to fix your sink, might not be the right person to do your asylum application.
Education
The first step, is education. I know this system. I have been doing it for 20years. It makes a difference sometimes if you are familiar with the big system of immigration and if you are also familiar with the local part of how we do things here, locally. A lot of times, I look at application someone has prepared and I know who prepared it and know the mistakes which they make.  I try to teach them not only to be honest with the system but be honest with the immigration lawyer who is trying to help.
For instance if someone tells me the situation that he is in, there are options. A lot of things come up in the system that they are used to not telling. They are so used to hiding. It is very challenging to work with the immigrant communities to get them to the place they need to be so they are legal or they are citizens or they are green card holders or they bring their children that belong to them. It’s devastating when I have people do DNA and it’s not their child.
Trust
The trust and the ability to ask question is very important. It is not bad asking question. It is better than having clients that don’t ask questions. A lot of times, certain immigrant communities start a rumor and people go there. They don’t ask questions. People’s level of education sometimes really affects whether they ask questions or not. If we come from a communist system or a dictatorship where questioning was never thought, It is the job of a lawyer to teach or pull information. I always joke that I’m a product of communist parents and so I’m never late. I’m always five minutes earlier. It’s worth it doing the right thing. At some point, as lawyers we have to be ethically honest and abide by the rules that we have.
Hope
There are so many legal options for people to become legalize, for people to get green card, for people to become citizens. I think a lot of people go to community-based organizations, people go to church, people go to people they trust. But we have to be able to assess the situation and decide what will work best for a particular person and not a situation that works for someone else. Everyone has a set of experiences. As a lawyer I want to be able to know you, to know how I can help you or can I help. I’ve been doing this for a long time and I love what I’m doing. /TNA
Post Views: 1,427
Share!
Tweet