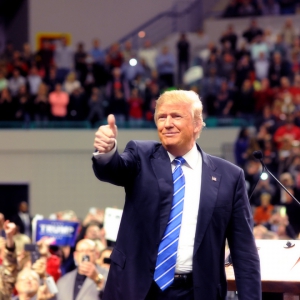 With the results of Pennsylvania in at about 2.40am, Thursday, November 9, Republican Presidential candidate, Donald Trump has won the 2016 U. S. Presidential election becoming the 45th elected President of the United States.

He was introduced to the supporters by elected Vice Presidential candidate Governor Mike Pence.
Donald Trump told his supporters that “I just received a call from Secretary, Hillary Clinton. She congratulated us. I also congratulated her. She fought very hard. We owe her a major gratitude for all she has done for this country.
“Now is time for Americans to bind the wound. It is time for us to come together as one united people.
I pledge to be President of all Americans. I am reaching out to all to work together and unify the country.
“We are going to rebuild our infrastructure and put millions of people to work as we build,” he said.
According to him, “We have a great economic plans. We will double our growth. No dream is too big and no challenge is too great. America will settle for nothing less but the best.
“To the world community we will deal with everyone fairly,” he said.
Post Views: 1,297
Share!
Tweet

One Response to “Donald Trump wins, calls for a unified country”