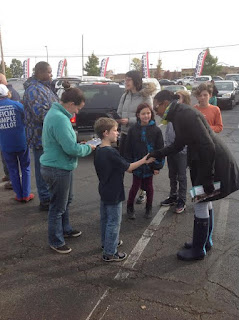 The combined total voters who have cast their ballots in person and those who have returned the requested absentee ballots at the 2016 U. S Presidential Election have risen to 105, 657 on day eleven of Early Vote at the Franklin County, Columbus, Ohio.
This represents about 12.5percent of the 839,358 registered voters in Columbus, Ohio with more expected to vote in the next 12days before the November 8 election.
A breakdown of voters and returned absentee ballots made available to TheNewAmericans shows that 81,078 absentee ballots have been returned out of 167,848 mailed out to registered political parties’ members and unaffiliated while 24,579 have voted in person at the Morse Road Early Vote Center.
The Unaffiliated have returned 31,486 of the 76,170; Green Party returned 90 of 187; Libertarian returned 44 of 107; Republican returned 20,622 of 45,777 and Democrat returned 28,836 of 45,013.
Meanwhile the President of the Somali Community Association, Omar Hassan has urged registered voters in Columbus, Ohio to use the early vote period to vote.
Post Views: 1,116
Share!
Tweet