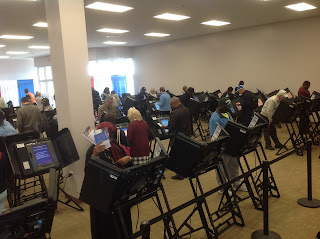 The voting hall of the Franklin County Early Vote Center, Columbus, Ohio was filled to capacity on Day 9 with virtually all the voting kiosks occupied.

A photo session by TheNewAmericans at the Morse Road center shows voters representing the diverse population of the 839,358 registered voters in Columbus, Ohio occupying all the kiosks. 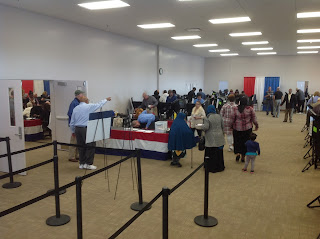 Every voter gets a sticker of “I Voting” with the map of Ohio State between the “I” and “Voting” which could at a first glance be read as “I Love voting”.
Meanwhile, the interim President of the African in Diaspora of Ohio State, ADO, Mr Oye Olatoye has urged registered voters to go out and vote, especially during the ongoing early vote exercise.
“Those who have voted should inform those who are yet to vote to do so,” he said.
Post Views: 940
Share!
Tweet