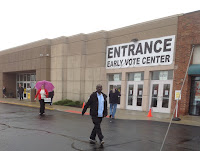 At least 14, 992 voters using the absentee ballots option have returned their ballots out of the 147,115 mailed out from the Franklin County in Columbus, Ohio on the sixth day of early vote.

The absentee ballots were requested by political parties’ registered members and the unaffiliated.
A breakdown from the Franklin County, Columbus, Ohio to TheNewAmericans showed that 7,750 ballots have been returned by the 38,653 mailed out to Democrats and 1,839 returned by Republicans of the 42,615 mailed out.