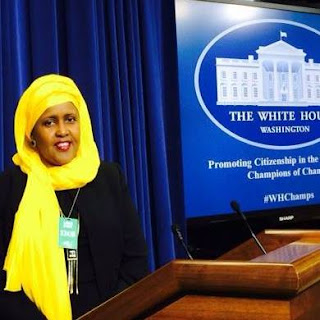 Khadra Mohamed is originally from Somalia but immigrated to the United States on the Diversity Visa program (also known as the U. S. Visa lottery) in 1997. She moved to Columbus, Ohio in early 2000 because of the influx of Somali refugees to central Ohio and the compelling need to serve them.
After graduating in History, and in the early time of the civil war in Somalia, Khadra moved to Europe where she put in for the U. S. Visa lottery and won. Now an activist and business owner, Khadra told TheNewAmericans her journey and plans for women.

Immigrant
I came to the US 1997 – the end of 1997. I moved to Columbus, Ohio early 2000. I’ve been in Columbus for 16years. I’m originally from Somalia. After the war broke out, we had to flee to safety. I made my way first to Europe. I came here with the DV Visa, though most Somali came as refugees.
There is a distinction between an immigrant and a refugee but some people don’t know. An immigrant is someone that decided to immigrate for different reasons, safety inclusive. My immigration status is as an immigrant but I am from Somalia.
I had my undergraduate degree in Somalia. I wanted to be a journalist but my dad was not convinced with that. He felt journalism was not a good one for me in terms of making money and all that. In those years in Somalia, the political unrest was starting and things were not going well. He wasn’t sure as a young woman if journalism will be safe, especially going to cover some stories and the risk.
My younger sister, is a medical doctor. I finished school with History degree and the war broke out. I made my way to Europe. And I came here. I went back to school here in Ohio State University for a Master’s Degree in Social Work. I became involved in community organizations and I became an activist.
Activist
When you become an activist, there is no way you will not be involved in the ballot as well, whether here or back home. I’m still watching what is going on in Somalia. I travel to attend conferences about Somalia in different parts of the world. Here I am every time in advocacy. I am in contact with elected officials in our localities. I organize events. I am the founder of International Women’s Day celebration. That happens every March at the Ohio State House for the last six years. It is a big event that is well attended. It brings women from all works of life, especially the immigrants. It brings together elected officials, congress women and city council members. We highlight the role of women in the society especially the immigrants. We give recognition to the women for their achievements, participation and well being of the society here and somewhere else in Africa. We give Leadership Awards which include panel of discussants where we invite women from the political, academic, the private and social sectors. In six years it has become something that is looked up to.

I thought it is time to move to the next level, not only helping people to meet their immediate needs such as housing and so on. I thought of this idea of highlighting and promoting what the women do, engaging the elected officials and other people who can help change the policies in terms of improving the lives of the immigrants.

Center for Somali Women
When I came in to Columbus, Ohio in 2000 that was when we had the influx of Somalians and families growing in central Ohio. There were families coming everyday through resettlement programs directly from the refugee camps or Africa. There was overwhelming needs for facilitating the needs of these new families. I was already prepared, different from a lot of people in terms of the language skills. It was easier to get a job for myself, to help other people. I became involved with agencies that were helping and working with the refugee population, mainly Somalis.
I was doing interpretation, to helping in housing, resettlement issues, and in the school system working as bilingual teacher in the classrooms.
With other women, we started the Somali Women Association back then. We were able to tackle a lot of immediate issues like housing, finding resources such as language and training classes.
By 2009, I started thinking of what else do we need to do – refugees coming in everyday, people needing language assistance, housing assistance, transportation assistance and it is something that is going to be ongoing. I thought it is time to move to the next level, not only helping people to meet their immediate needs such as housing and so on. I thought of this idea of highlighting and promoting what the women do, engaging the elected officials and other people who can help change the policies in terms of improving the lives of the immigrants.

The low paying income that they can get here requires both husband and wife to work to be able to take care of the home.

Refugee
We wanted to share the light that the immigrant or the refugee is not here to collect only. Someone might come here as a refugee or an immigrant to start a new life and might need assistance. Some people might not need direct assistance from the government but rely on friends and others. When they are on the field their contributions weigh more and important.
The goal of Center for Somali Women was to give the women the tools they need to be successful in their lives, to promote, to achieve their goals to lead their families. Back in Somalia, the traditional role for the women was to stay home and do the domestic work while the men were to provide for the home. 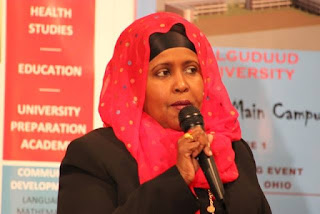 Challenges
What happened here was that women ended up without their husbands, either they were killed in action or missing in action at that time. They came without their husbands. They needed to become the head of the household whereas back home it was not so, the man was the head of the household. It became a new phenomenon. They needed to adjust. A lot of the women came with very limited skills. Even some families came together, the wife and husband but life here requires self-sufficiency. Even though some people assume that immigrants and refugees are here just to collect tax payers’ money and live with government assistance which is not true. You cannot live good life with government assistance. That’s why a lot of people who live on government assistance have their families broken and kids ending up on the streets. What the system provides is not sufficient.
It is different from what is in place in the Scandinavian countries in Europe where the welfare system can provide adequately.
The low paying income that they can get here requires both husband and wife to work to be able to take care of the home. We also discovered that while they are doing these jobs, a lot of women were absent from the lives of their children. We needed to tackle all these issues by providing after school programs and how to keep the young children in the schools and many others.
Columbus Schools
When they came, we struggled with the Columbus Schools when they were overwhelmed with enrollment in 2000. They thought all Somali children were not ready academically. They said they were special needs and have learning disability. We said ‘no’ that those kids were behind because of displacement but that they are very much ready. They said they will make special school for Somali kids, called Welcome center. All they do is try to teach them little English. We said no and called it segregation. But thanks to God and this country which is a country of law. It is not a country of people. It is a country of laws where people go by the laws and constitution. The founding fathers of this country laid the foundation. Anybody could have been able to do what he wants if not for the laws and constitution.
Therefore we asked the Columbus City Schools to come up with a system that will integrate the Somali children. So they hired a lot of Somali professionals to help the kids catch up. I see the Somali kids that came those time, some of them are out of College and have become professionals.
I thought it was time to show the contribution of the women to the society so I started with the Somali women and gave leadership awards to encourage them. I have expanded to other women.
Post Views: 1,466
Share!
Tweet