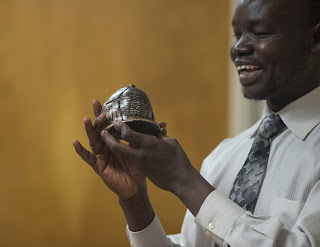 As a six-year old, Bol Aweng fled the war in South Sudan moving into a refugee camp. By 2001 he was fortunate to leave the refugee camp and brought to the United States. While growing up in the refugee camp, he was unable to read or write in English but was able to put down his thoughts and experiences in drawings. He lived first in Nashville, Tennessee and in 2006 the young Bol moved to Columbus, Ohio to attend Ohio State University where he studied Fine Art, majoring in Digital Art. He graduated in 2009.
The artist and motivational speaker who was at The New American Festival held September 10 in Columbus, Ohio told TheNewAmericans that “Now I am raising money to build a medical clinic in my village in South Sudan. I am still raising money to build and sustain it”.

Refugee Camp
I came to the U. S. through the refugee camp. I had a terrible experience because I arrived in New York City the same day of September 11, 2001. I have to start a new life and transition was not easy coming from refugee camp to the City.
What motivated me to go to school was to find a future. In the refugee camp, you don’t see future. You just live there for today, hope to see tomorrow, hope to see next day, hope to see next month. You don’t have plans that in one year or two years you will be doing this because there is no better education and there is no opportunity that you will see that will take you to what you will think. So there was no dream in the refugee camp.

United States
When I got to the United States, I saw the opportunity to go to school, to go to work, support myself, to have a family, to raise a family, and to help somebody else like building the medical clinic. I saw a lot of opportunities in front of me and looked forward to going for it and that is what I did. America is a land of opportunities but you must work hard to get it. Pursue something and you will get it.
Fine Art
With the Fine Art, I do a lot of paintings and a lot of my Art works depict what happened to me when I was a child. I left my family when I was six years old. I spent 20years away not knowing what happened to them, not knowing where they are. I have to live the life not having parents or family members beside me. All this time, and because I did not know how to write, the only way to remember what happened was through Art. Before I went to school, I did the sketches of all the journey that I passed through, all the things that happened to me during those times. Arts helped me to put this down.
Society
People appreciate the talent that I have and what happened to me in life. Some cannot imagine such will happen to people and that the person will still be smiling and willing to talk to people. But it is a reality.
People who came to America as immigrants are hardworking people that just didn’t have opportunities. But when they find one, they go for it, they try to make best out of it, and they try to find the future that has been taken away from them, the lost future that they did not see for many years. They are always looking forward for opportunities and they want to pursue it in a better way.
When people come in as refugees, they deserve respect because they went through terrible life. They want not find better life. Instead of thinking about what happened they are looking forward to changing their lives and changing the lives of other people.
Contributions
I go round the city talking to school children in elementary schools, middle schools, high schools, colleges, universities, churches and various groups of people that need to hear my story. A lot of people in these groups have never suffered. Most of the children are from rich families and they don’t have problem. But when they hear my story, they know that what they have is not everything. They understand exactly that life is more than what they have known. It gives them a chance to see the way around them.
Post Views: 1,105
Share!
Tweet