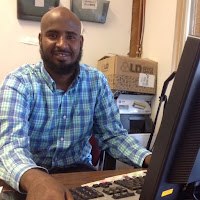 As Mukhtar Yusuf, partner at the Immigration Resource Center in Columbus, opened the office door at 10am, three women and a man in need of assistance were already waiting to go in with him.
Within 10minutes, a line was already formed. “We make sure we keep the line moving,” he told TheNewAmericans as he took few minutes to answer questions.
“This is a fast paced business. We render a lot of immigration services including petitioning for family members, green card and citizenship applications and other travel related issues,” he explained.
According to him, ‘a lot of people come here because somebody else that we have done something for told them about us. When they come, they know that it is a resource center that they can come in freely, ask for information and get knowledge. We also help them reach as far as the Department of Job and Family Services.”
Mukhtar, who came to the United States from Somalia as a six years old, 24years ago said the center was set up in Columbus in 2001 and it has branches in other states. –TNA
Post Views: 1,582
Share!
Tweet