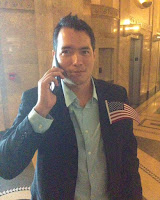 “I have been waiting too long for this,” Oscar Lee from Peru, now a U. S. Citizen told TheNewAmericans with a gusto of excitement on Thursday July 21, 2016 as he sat in the lobby of the U. S. District Court Southern District of Ohio at Marconi Boulevard, downtown Columbus at the end of the Naturalization Oath Ceremony.

Oscar Lee, part of the 55 immigrants from 26countries who took the Naturalization Oath to become citizens of the United States of America on July 21, has been in America since 2001.
As he made calls to relatives informing them of the good news, he said “I am so proud to become a U. S. Citizen. I have been waiting for this.
Finally, I got the citizenship.”
The joy and excitement he radiated after the event did not come from the ceremony alone but from the prospect. According to him, “I know my life is going to change for the better from today.”
He is confident of this belief about the prospective change in his life because he would not have left Peru in South America, a distance of 3,455 miles or 5,560 kilometers in air travel distance, if there was not going to be a change in his life.
He concluded that “being a U. S. Citizen means, pretty much, all doors around the world are opened for you.’
Post Views: 1,132
Share!
Tweet