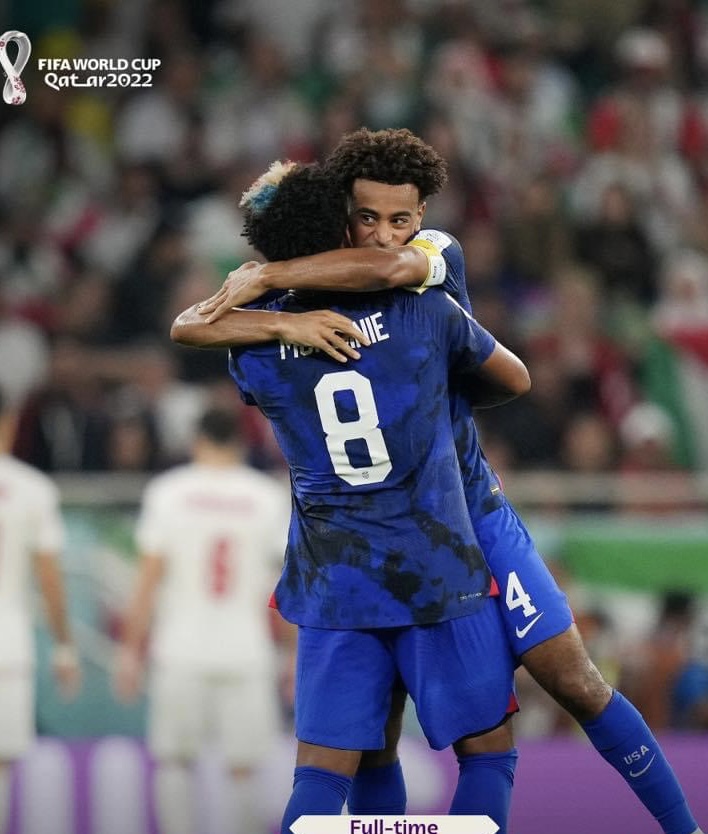 If there’s one thing that can reunite a nation at the height of a divided country and bring everyone together, it is Sports. Hundreds of fans watched as Team USA advanced from Group B into the knockout stage with a 1-0 victory at the Lower.com Field. Regardless of our differences, fans united to support their country, irrespective of religion, ethnicity, or nationality.

There’s nothing more than tremendous honor watching a team representing the United States of America and having such an incredible feeling than rooting for such a team. As our nation goes forth, nothing is more meaningful than standing shoulder to shoulder with someone from a different culture and having another belief. Win or lose, we stand by our team, and we are proud of them in the face of adversity.

Currently, a nationwide and worldwide protest movement is underway in Iran over the death of a 22-year-old Iranian woman who died in police custody. Per the report, over 400 people have lost their lives since the protest started. Some Iranians have stated that the team has stayed silenced and is not pleased. However, team captain Eshan Hjasi \sent out his condolences to those protesters who lost their lives.

In a recent statement, U.S. President Joe Biden stated that he stands with the protesters, a quote that Iranian leadership was not too fond of accusing the Americans and other leaders worldwide of getting involved.

The Iranians played with a heavy heart, and regardless if you were a fan of the team, one could see the passion whenever they had possession of the ball or were playing defense. Team USA is now 1-1-1 all-time against Iran after winning 1-0 on Tuesday to advance to face the Netherlands on Saturday.

Both teams had plenty of chances to score throughout the match, but their defense stood firm. USA’s Timothy Weah, the son of President of Liberia George Weah, almost scored at the 33rd-minute mark on what had been a breakthrough for the team. However, the ball skied over the crossbar.

“As the U.S. pushed forward in second-half stoppage time, McKennie found Weah on the break, who slotted the ball home around the goalkeeper, but the referee waved the goal because Weah was offside.”

Chelsea player and Captain of the USA Men’s Soccer team Christian Pulisic scored at the 38th-minute mark against Iran to give the team a 1-0 lead. He sustained an injury on that play and did not play in the second half. Despite the injury, the team’s defense stepped up and, eventually, advanced to the round of 16, where they will face the Netherlands on Saturday.

In the 52nd minute, Iran’s Saman Ghoddos went into that USA territory with a chance to even the match, but his header went over the bar.

A clutch performance by Team USA goalkeeper Matt Turner prevented Iran from scoring in the 82nd, 93rd, and 98th minutes.

“Forward Christian Pulisic has been diagnosed with a pelvic contusion, and his status is day-to-day,” the team announced.

He would go on to score on that play (38th minute) but ended up crashing into Iranian goalkeeper Alireza Beiranvand. Christian did leave the match at halftime and went to the hospital “for precaution after experiencing dizziness,” USA manager Gregg Berhalter said.

Today in group C, we will find out which top two teams go to the round of 16. Currently, the Netherlands, the winner of Group A, finished with seven points and will face Team USA on Saturday, Dec 3rd at 10 am on Fox. The USA finished second in Group B with five points.

For the USA to break its 0-5 record against the Netherlands, forward Christian Pulisic must play, but he remains questionable after sustaining that injury against Iran.

Poland has yet to lose a match, and they will face Argentina, who is 1-1. Saudi Arabia, who is also 1-1, still has a shot of advancing by winning against Mexico. For Mexico to go to the knockout stage, they must beat S.A. and pray that Argentina defeats Poland.

* In only the second time in World Cup history, the USMNT has kept two clean sheets. A 3-0 win over Belgium and a 3-0 win over Paraguay during the inaugural 1930 FIFA World Cup were the last two shutouts for the team.