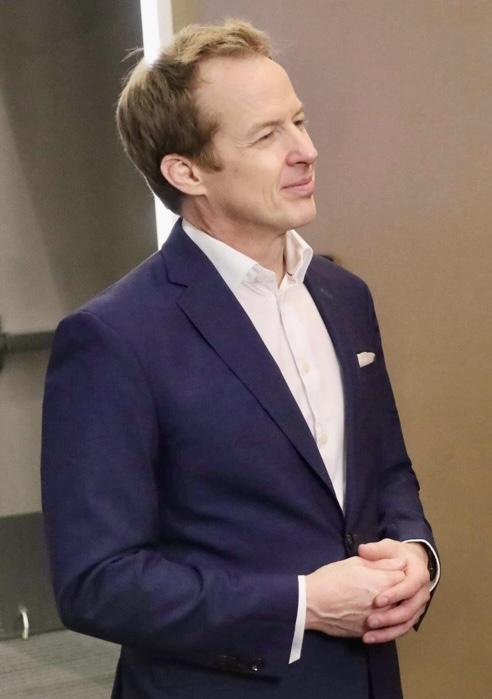 The first time you meet Kenyon Salon, you will notice that he is a sharp dresser and very punctual when he speaks, and after attending one of his events, you will automatically check your bucket list and say, “Oh boy, I need to start living.”

Motivational speaker Kenyon Salon has over 6,000 skydives under his belt and has jumped 400-plus times as a base jumper. He brought out a ladder and stood on its holster, using it as one of his props during the opening of the 2022 Ohio School Board Association Conference. The entire audience fell silent as if they were holding their breath.

These days, Salon travels worldwide during speaking engagements as he is known as the James Bond of public speaking. He’s been on NFL Films, ESPN, NBC, CBS, ABC, FOX, MTV, and other news outlets. The New Americans Magazine caught up with Kenyon Salo to learn more about his humbling beginning and why speaking at the 2022 Ohio School Board Association Conference was crucial.

Educators can have a positive impact one student at a time:

If we believe that everybody we come in contact with, there’s a greater chance that we can touch or impact their lives. That’s where the ripple effect happens. I understand that a domino effect is a fact that I can reach so many people, whether I speak directly to a high school student or from the top down. My influence can trickle down to another person’s life, even if it is at the top-level administration level.

And it’s not just this generation, or just that person in this timeline, especially if you speak to a student and you change that student’s life, how many more lives will they change along the way?

Every Moment counts when interacting with a student:

That’s the game changer, every interaction is an opportunity to impact someone’s life, and some people potentially have a complete redirect by something they hear or experience. Whether I bring it to the stage or a teacher, school board member, or administrator makes a difference in that person’s life; the ripple effect is positive worldwide. That’s what we must believe in because every Moment counts.

For me, adventure has been the core of who I am as a personality. As a kid, I used to enjoy jumping on my BMX bike to see what kind of tricks I could do, playing on rocks, or climbing up to the roof of my house. Eventually, it led to skateboarding, and skateboarding led to snowboarding.

Embarking on an adventure :

I moved to Colorado because I wanted to become a professional snowboarder, and the state has one of the best premier skiing and snowboarding destinations. Then I moved into skydiving and eventually base jumping and wingsuit base jumping.

He was a part of the Denver Broncos’ Skydiving team, Thunderstorm. The group, Thunderstorm, is a four-person Parachute leaping from 5,000 feet over downtown and going about 60 mph into the Broncos’ Empower Field at Mile High to give fans something to pump them up before the start of the game.

“A lot of people will look at the stadium and say, ‘It’s a big, wide-open field,” said Kenyon Salo. “But immediately as soon as we add the field goal cables, the cable cam cables coming from all four corners, and a 50-yard line cable, you have to dive small parachutes through this hole here,” he told CBS News.

“Joining the Thunderstorm and the Denver Broncos was a game-changer, but without the support from my mom, it would not be possible, and she was always there; she believed in me, and it helped. I’ve always been the type to calculate everything I do; throughout my adventures, the highs and lows, that mindset always follows me,” Salon said.

While I take risks, my risks have a lot to do with calculation, whether it’s something I have planned for years. To do it, I say to myself, I’m going to try this today, so let’s see what happens. I methodically go through the process so that I can make sure that I’m around to be able to do it again.

While I was in Switzerland, I did a base jump off a 2000-foot cliff, and everything was going fine, and I deployed my parachute, and it opened up. However, it opened up with twists, and I flew into the topic of trees, and there I was, hanging 70 feet above the ground in these trees. I pulled out my phone and called a friend, and I was like, hey, I’m OK; I’m in a tree.

I got rescued, and I came down; everything was fine. I had to have a higher Mountaineer go up, get my parachute, and bring it down. But I could break it down and say, “Look, I’m OK, I’m not hurt, brush myself off,” and then say, “Why did it happen? I understood that it was a close call, but also a pretty fantastic story I still have to this day that I get to share.

From an athletic side of things, it’s a mindset. That mindset is what everybody should build on when they do anything because it is the same way I feel when I stand at the edge of a 2000-foot cliff. I’m about to jump off or out of a plane to land in the Broncos stadium, the same way I feel before I go on stage.

What’s essential is to understand how repetitive the things you do are, and I’ve done the same thing repeatedly. I believe in myself, I know my skill set, I’ve done lots of visualizations, and I’ve practiced and ultimately know that to be successful in life, you have to have a foundation.

We all have to go the extra mile and put in the work, and building knowledge helps break down fear. The more knowledge you learn, the less anxiety you’ll have, and when it comes down to microseconds, especially for student-athletes, it’s that will to push a little bit harder than the other person. So that you can have what you’ve always wanted, and that’s what I do.

“OSBA members were on top of the charts, and the participation from everybody was at 100%. It was one of those things where they thought I was the one bringing the energy, but I was just too excited to get the power back from them, so it was truly phenomenal, and I feel that this audience related 100%; they gave it at 100%.”