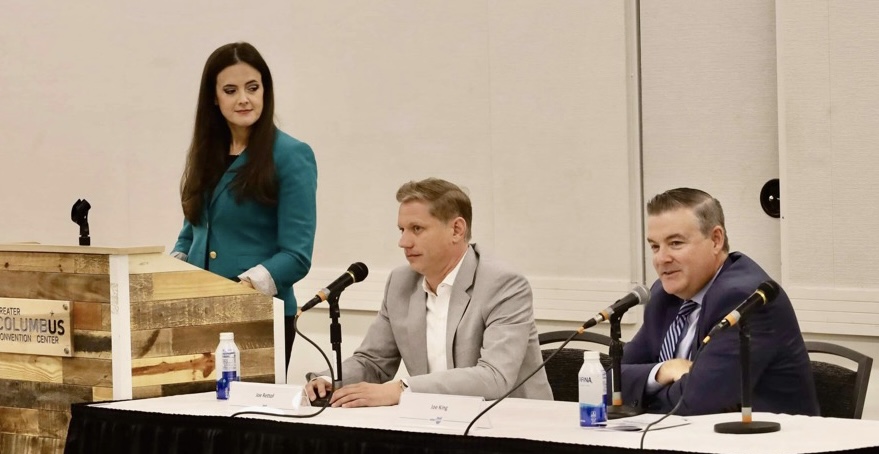 The 2022 Post General Election Conference presented by Impact Ohio, held at the Columbus Convention Center on Thursday, November 10th, aimed to explore the good, bad, and ugly post-election. It also looked at the outcome of the political process and how current and future policies will affect Ohioans.

The conference takes place every two years. And this year, there was a strong focus on bipartisanship, with Republicans taking advantage of high Inflation and energy to win big in the state legislature races. Focusing on the economy would increase job opportunities for recent graduates and draw more people to the state by bringing new firms.

The day was full of keynote speakers, including the recently Ohio U.S. Senate Elect J.D Vance, LT Governor Jon Husted, Secretary of State Frank LaRosa, Auditor of State Keith Faber, and much more. These panelists provided a closer depth of some of the issues legislators tackle daily on the floor.

Lt Governor Jon Husted discussed plans to bring more companies to Ohio, which would continue to create thousands of high-paying jobs for Ohioans. Husted also noted that Ohioans that voters put faith in Governor DeWine because he gets a lot done behind closed doors, and that’s what a leader does. And when it came to the U.S. Senate, “both Vance and Tim Ryan ran a great campaign,” Husted said.

In the next couple of months, the Dewine administration will provide a forecast for the next four years, including state budgeting, addressing the fentanyl crisis, and tackling the high Inflation. Despite high Inflation at the federal level, Ohio can cut taxes, reduce regulations, increase the housing supply, create more jobs, and encourage people to return to work.

Secretary LaRosa vowed to take the “after-action review” initiative to immediately identify any issues found during the election, records certification, and filing process and provide resources to improve it. His office is also responsible for giving business licensing.

Vance is married to a daughter of an immigrant in this country, so when it comes to receiving support from the New American community, it is one of the things he said that he does not take for granted.

Vance’s campaign promise included finding multiple ways to combat high Inflation in this country, so he intends to start working on it immediately. However, experts have stated that the high prices of many goods and services are a worldwide issue, not just here in the state. “We have lost many innocent lives, and we must stop it,” Vance said.

Vance noted that focusing on the Border issue will help prevent the flow of drugs into this country, especially fentanyl. His memoir, Hillbilly Elegy, was made into a Netflix movie. It focuses on his life growing up in a small rural town and the social and economic issues he faced, including watching some members of his family battle drugs and alcohol.

Part of the day’s Agenda included two breakout sessions, which featured two separate discussion topics. Option 1 from breakout session #1 focused on the autopsy of the 2022 Elections results, which provided a breakdown of the highs and lows from both political parties. It featured the Chairman of the Ohio Republican Party, co-founder of Punchbowl News, co-founder of R.T. Advisors, and founder and Chairman of the strategy group. Anna Staver from USA Today Network Ohio Bureau, moderator of the session.

Option 2 analyzed the future of businesses in Ohio, focusing on jobs, specifically in the manufacturing and energy sectors, development, and how politics and policy interact. Steve Stivers, a Former State Legislator now the President and CEO of the Ohio Chamber of Commerce, and J.P. Nauseef, President & CEO of JobsOhio, were among the panelists.

Option #1 asked news media personalities whether our democracy was in crisis and how liberal and conservative reporting could affect how we interact with what’s true and false.

Several Ohio State Representative ranking members provided an insight into the Ohio Budget, ARPA, and the Ohio Economy in option #2. “It is not great when it’s four dollars for gas or $6.39 for diesel. So, all of those are one of the factors during our budgetary decision,” Representative Bill Seitz, Ohio House Majority Floor leader, said.

Democrat Kenny Yuko, Ohio State Senate majority leader, and Allison Russo, democratic minority leader, also joined the panelist. Yuko and Russo stressed the importance of passing legislation to help the middle class, a proposal they felt they had to cross the Nile River, the world’s longest river before the Republicans would listen.

Ohio House Speaker Bob Cupp led the way in the Ohio House, and Senate leadership panel, which focused on how the mid-term election could shake things up come January 2023 when new members are sworn-in.

“The conference was very insightful, with many unique perspectives across the aisle. One thing I took away was that the work remains incomplete; that’s why listening to people with different ideas can help us grow as one,” one of the attendees said.

“It was great to have policymakers and elected officials talking about the impact of the 2022 Mid-Term Election and what that means for the future of policy. Further, what does that mean for the future policy marker, especially since some individuals leave due to term limits or lose re-election,” Steve Stivers said.

“On election night, we witnessed the first two Somalian-Americans elected to public office in Ohio, Ismail Mohamed and Munira Abdullahi. Since there are vast populations scattered around Central Ohio, the two are critical in weighing in on some of the issues impacting the new American community,” Allison Russo, Ohio Democratic minority leader, explained.

We can expect an exciting Post-election in 2024, especially if former President Donald Trump or Florida Governor Ron DeSantis runs.