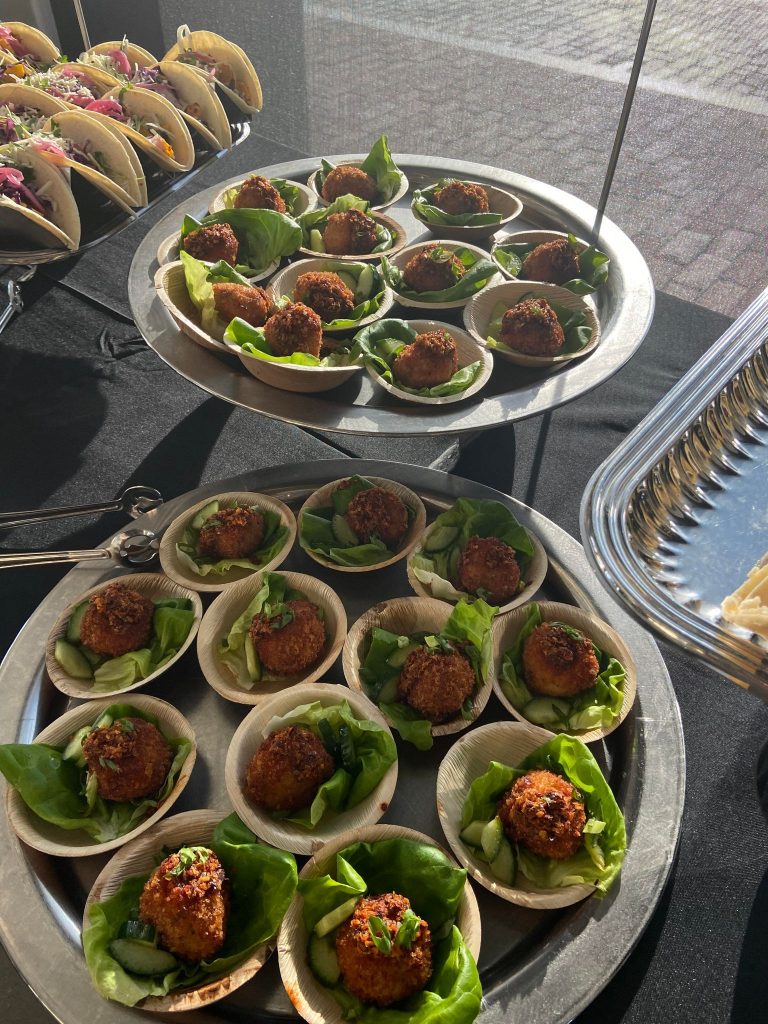 Danielle Nierenberg’s opening speech explained that Food Tank shares stories of hope and success in agriculture and food worldwide.” We do that to inspire, motivate, activate, and positively impact the food system.”

Next, video appearances by Kristen Johnson, President of Ohio State University, and U.S Senator Sherron Brown from Ohio talked about what the University and federal government are doing to help fight food insecurity. President Kristina M. Johnson discussed how Ohio State provides resources to help to fight food insecurity, including having dedicated faculty members, specifically in the Agriculture Department, to help lead the effort.

“I am glad that the celebration of world food day is here in Ohio. I cannot think of a better place to hold the event than in Ohio because one out of seven depends on Agriculture for the jobs in our State,” Senator Sherrod Brown said.

It was the senator’s privilege to contribute to the writing of the Farm Bill and be a member of the Agriculture, Nutrition, and Forestry Committee. According to the senator’s campaign page, it will help strengthen the farm safety net, improve conservation programs around Lake Erie, and fight childhood hunger.

Peaches Calhoun, a Commissioner for the Greater Southeast Area Commission (Columbus), attended the summit. “I am just going to the grocery store, so my takeaway is that when we think about food disparities, it’s also essential to keep light that we have resources. It’s just a matter of how that’s it,” she said.

During the summit, more than twenty speakers from across Ohio and the nation spoke about how their current line of work is helping resolve issues faced by people today, specifically in food and agriculture, including food shortages and policies surrounding scientists’ research to combat these problems.

“The world is producing enough food; however, human consumption of food is what production cannot keep up. Also, the problem is access to food, food waste, poverty, and political instability, like what’s happening in Ukraine,” Dr. Rattan Lan said. Dr. Lan is the World Food Prize winner and a lecturer at the College of Food, Agriculture, and Environmental Science at OSU.

Denise Osterhues, Senior Director, Sustainability and Social at Kroger, was one of the guest speakers; Kroger is the fourth largest grocery chain in the United States based out of Cincinnati, Ohio. The company recently announced a definitive merger with Albertsons Cos, Inc, which ranks behind Kroger as the 5th grocery chain, according to foodindustry.com. The move will help support union jobs and serve a broader community nationwide.

Former Secretary of Agriculture Dan Glickman, under President Bill Clinton, was the sixth key speaker. He served eight terms in the House of Representatives and chaired the House Agriculture Committee for six years before his appointment.

“We need a talent pool of intelligent, competent, young, and diverse people to enter the field. It is not getting support from the academic world, but building connections outside the institution to know that they can leave a mark when they leave and save the world, “Dan Glickman said. In his speech, Glickman expressed his enthusiasm to see so many young people interested in food and agriculture since he was a successful lecturer for many years.

When Educational establishments are supported, it helps put out a talent pool that will help us solve some of these problems that we are facing in Food and Agriculture in the future,” Glickman said.

“It was a pleasure to be invited to the world Food Day summit. My takeaway from World Food day is that we tend to focus on the negative when discussing food disparities, food deserts, and a lack of resources regarding agriculture and our farmers. But the secretary, former secretary of agriculture, shed light on how much America is #1 and providing food to its economy,” Calhoun said.

Jocelyn Brown Hall, the Laison Office Director for FAO, focused on what the organization is doing, from the United Nations side, to help improve food security. At FAO (Food and Agriculture Organization), they help farmers understand what practices they are doing that will enhance their production and livelihood. “We’ve lots of challenges ahead, so focusing on world food day yearly means that we still have not cracked the code yet,” Hall said.

President Danielle Nierenberg ended the evening by thanking all the moderators, speakers, and attendees who participated in the official North America World Food Day Celebration.

“We respect and recognize all those involved in food and agriculture, especially farmers, food workers, and those behind the scenes battling for better policies to address the disparity in our food supply,” Danielle Nierenberg said.

The evening ended with beautiful gourmet soft taco dishes provided by the University’s food service department, and attendees had a chance to interact with guest speakers and other scholars in the room.

“It is our number one goal to make sure that we not only have some food but have the quality of food that we desire to have, which is what makes us America; we can have decadent nutrition, and we have the resources for corn, wheat, rice, and all the staple foods,” Calhoun said.