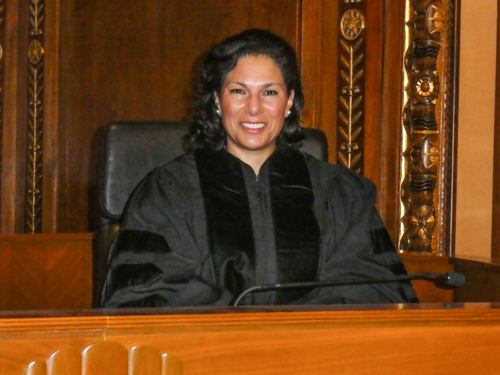 As a teenager, Judge Marilyn Zayas accompanied her mom to a family court and served as her ad hoc interpreter as the mom fought for custody over her youngest brother to protect him.  Through this experience at that time, the young Marilyn Zayas realized the profound impact courts have on people’s lives. Though at 23 she had already accomplished her childhood dreams, her passion for the law was so strong that she left a very good, secure position with Procter & Gamble to enroll in law school.  “At the time, I had three children under the age of four,” Judge Marilyn Zayas, who is running for a seat in the Ohio Supreme Court in the November 8, 2022 general election told the New Americans magazine. She spoke of her childhood, growing up in a working-class neighborhood that was devastated by drugs and crime, to becoming a computer scientist and eventually a Judge of the Ohio Courts of Appeals; and now on her way to the Ohio State Supreme Court:

As a little girl, you had three dreams: to go to college, leave New York City, and buy a house, since you had lived in apartments all of your life then. What has changed?

Surprisingly, I accomplished all of my childhood dreams before the age of 23.  I grew up in a working-class neighborhood that was devastated by drugs and crime.  I often faced the sting of bias and discrimination against Puerto Ricans, and an environment in which I was expected to become a statistic.

I graduated college with a degree in Computer Science and moved to Ohio to work for Procter & Gamble as an IT manager.  I purchased my first home in Cincinnati in 1988.  After six amazing years with Procter and Gamble, I enrolled in law school and began my career in law.

I credit my success to my mother who instilled in me the value of education and encouraged me to work hard, excel in school, and pursue the unlimited opportunities that she never had.  Her sacrifices and hard work enabled me to focus on my education, achieve my childhood dreams, and pursue new goals and dreams.

“I am running for the Ohio Supreme Court because our state deserves a justice from a background and circumstances that represent many of the Ohioans the court serves, who has the courage to take on challenging issues with an independent and common-sense approach that is focused on maintaining the integrity of our judiciary.”

My passion for law began as a teenager when I accompanied my mom to family court and served as her ad hoc interpreter as she fought for custody over my youngest brother to protect him.  From my perspective, the court disregarded the serious issues my mother raised.  I could not understand why my mother’s pleas went unheard.  At that time, my mom, who was born in Puerto Rico, had a seventh-grade education, limited English language skills, and worked in a sewing factory.  She had very few resources for legal representation.  Through this experience, I realized the profound impact courts have on people’s lives.

My passion for the law was so strong that I left a very good, secure position with Procter & Gamble to enroll in law school.  At the time, I had three children under the age of four.

How would you describe your period in the bar and transition to the bench?

Advocating for clients is both challenging and extremely rewarding.  Often, as attorneys, we meet our clients during the most stressful periods of their lives.  We must fully listen and understand their concerns, while fully analyzing the legal issues, providing the best possible legal strategy, and reassuring our clients that we are diligently working on their behalf.  The positive impact we have on their lives is quite meaningful and rewarding.

I advocated for clients for 20 years, litigating in both state and federal courts.  My legal career began as an intellectual property and labor and employment attorney.  Later, I worked for the Hamilton County Public Defender’s Office representing adults and juveniles who could not afford to hire an attorney.

Following this, I built my law firm which focused on immigration law.  I handled investor and business, and family visas and asylum, removal/deportation proceedings, and a variety of immigration appeals in federal courts.  I advocated for clients from all over the world and from all walks of life.  Some were millionaires, some were impoverished.  Most spoke English, some did not.  I earned a reputation as an attorney who provides honest and zealous representation while navigating complex and extremely intricate cases.

My judicial reputation is that I consider the perspectives of all involved, and faithfully apply the law and our constitution.  I bring a unique perspective to the court, which comes from my 20 years of experience advocating for clients and my underprivileged background.  In 2021, I was recognized by Good Morning America for my community contributions, including my work with students.

I am running for the Ohio Supreme Court because our state deserves a justice from a background and circumstances that represent many of the Ohioans the court serves, who has the courage to take on challenging issues with an independent and common-sense approach that is focused on maintaining the integrity of our judiciary.

My judicial philosophy is to faithfully apply the law and our constitution equally to all, independent of outside influence or partisan pressure.  Politics have no role to play in our judiciary.  When people come to court, they want an equal opportunity to be heard, and an independent judge who will fully and fairly resolve their case.  My judicial record shows that I thoroughly review the facts of each case, analyze, and apply the law as written, and understand that each decision affects people from all walks of life in all 88 Ohio counties.  My priority is to ensure that the law is applied fairly and consistently, with integrity, independence, and common sense.  Public trust and confidence in the judiciary are achieved when our decisions are based upon the facts and legal arguments presented in court, the law, and our constitution.

Knowing the personality that you are contesting against, Justice Patrick DeWine, who is a sitting Justice and the son of a sitting Governor in the State, what are the possibilities of winning?

In my first election, I defeated an incumbent who had been appointed by the governor, with 51% of the votes.  In 2018, I was re-elected by an overwhelming majority of over 60% of the voters.  Voters understand that judges are not politicians.  Voters understand that politics must play no role in our judiciary in order to preserve the independence of the judiciary and ensure judicial fairness, integrity, and impartiality.  I trust that voters seek to elect judges who decide cases based upon the facts, the law, and our constitution independent of political influence, pressure, and connections.

One challenge to voters is determining whether a judicial candidate will be a fair and impartial judge, who upholds the independence and impartiality of the judiciary while avoiding all appearances of bias.  To that end, Ohio has a Judicial Candidates Rating Coalition consisting of  northeastern Ohio bar associations who provide non-partisan, independent ratings based on a candidate’s integrity, diligence, experience, and knowledge.  After interviewing the candidates, reviewing their work and questionnaire answers, and assessing their ability to be fair and impartial, respectful, and even-tempered judges, the coalition members rate each candidate.

I was honored to receive an “Excellent” rating, the highest rating from the Cleveland Metropolitan Bar Association and the Norman S. Minor Bar Association, the premier organization for Black attorneys in Northeast Ohio.  Overall, my ratings are higher than my opponent’s.

How would you describe the “Bring Students to the Court of Appeals” program today?

Since my election, I have created and implemented the “Educating Tomorrow’s Leaders program,” a partnership with high schools and universities that brings students to our Court of Appeals.  I am committed to providing students with the opportunity to learn about the court system, observe our court system in action, and interact with judges and attorneys.  My goal is to inspire and mentor the next generation and encourage them to pursue their dreams regardless of the obstacles they face.  My childhood was very humble.  I learned the value of hard work, dedication, and education, and overcame numerous obstacles to earn my college degree, become an attorney, and serve as a judge.  Throughout my path, I learned the value and importance of helping hands along the way, and it inspires me to help others achieve their dreams.  I am committed to continuing to build a judicial reputation that encourages others from unconventional backgrounds to pursue a career in law.

Do you have any other information you may want us to know apart from what we already know?

My mother is from Puerto Rico and only has a seventh-grade education.  After she left a difficult marriage, my mom single-handedly raised my three brothers and me on her wages from working in a sewing factory.  Two of my brothers are teachers.  My oldest brother served as a police officer for 20 years until his career ended when he was hit by a drunk driver while on duty.

This is my sixth year serving as one of the 69 appellate judges in Ohio, during which time I have decided over 1,200 cases.  I have also served on Ohio’s Second, Sixth, Eighth and Tenth District Courts of Appeal by special assignment of the Ohio Supreme Court Chief Justice and was selected by the Chief Justice to sit with the Ohio Supreme Court for a case.  Never could my mother have dreamt that all of her children would serve their communities by choosing careers in public service.