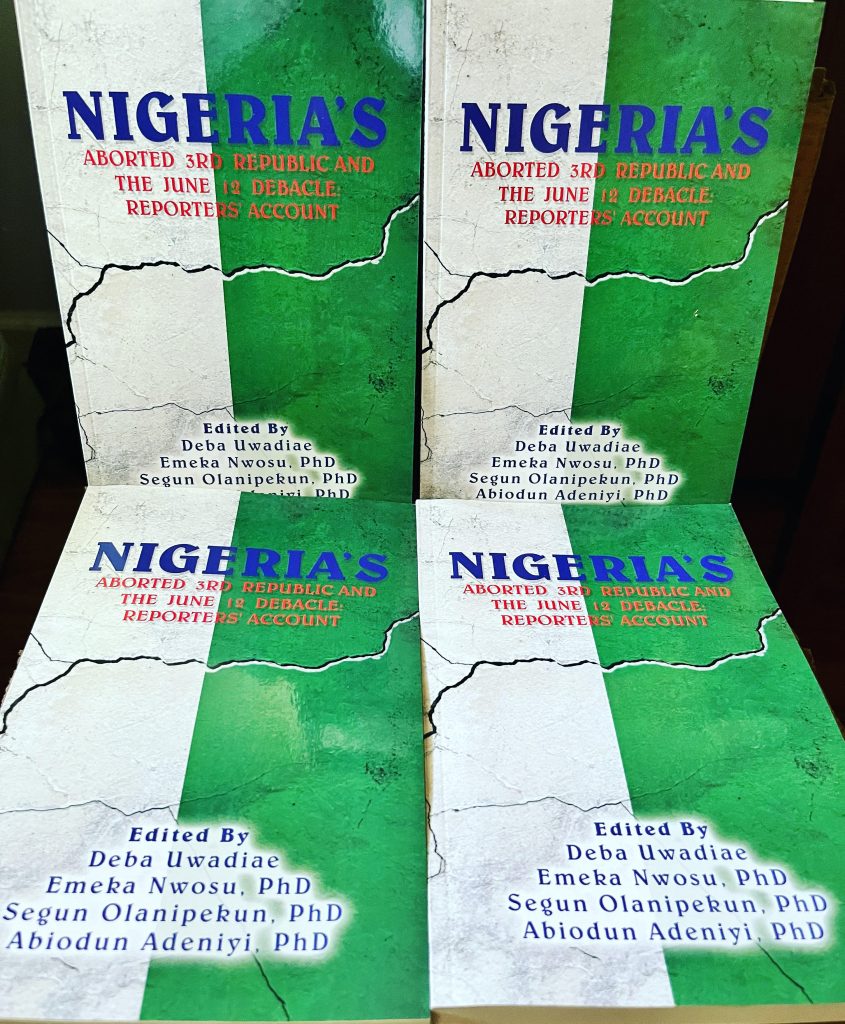 Nearly 30 years after the epochal June 12, 1993 elections and the end of the Third Republic, in Nigeria, journalists who chronicled that era under the aegis of the National Association of Political Correspondents (NAPOC 1990s) have come together to produce a book billed for public presentation on September 20, 2022 in Abuja.

Titled, “Nigeria’s Aborted 3rd Republic and the June 12 Debacle: Reporters’ Account,” the volume features 242 pages and 32 chapters put together by journalists who occupied the frontline of reporting the General Ibrahim Babangida Transition Programme from inception to cessation.

Venue for the book presentation has been fixed for the National Press Centre, Radio House, Garki, Abuja.

In statement signed for NAPOC, Felix Obagwina said “Dignitaries expected to honour the September 20 presentation of the historical project in Abuja are: Former Chairman, Daily Trust Editorial Board, Mallam Mahmud Jega, designated as Book Reviewer, and Director-General of the National Council for Arts and Culture, Otunba Olusegun Runsewe, who chairs the occasion.”

Also expected are the National Chairmen of the defunct Third Republic political parties, Chief Tom Ikimi of the National Republican Convention (NRC) and Ambassador Baba Gana Kingibe of the Social Democratic Party (SDP), asides Governors, Senators, House of Representatives Members and other political actors and juggernauts from that era.

Edited for NAPOC by the quartet of Professor Abiodun Adeniyi (Baze University, Abuja), Dr. Segun Olanipekun (USA), Mr. Deba Uwadiae (USA) and Dr. Emeka Nwosu (Abuja), the book is a potpourri of exclusive revelations and analyses on the key personalities and clandestine dramas that defined the aborted Third Republic.

The Third Republic conclusively collapsed when General Sani Abacha overthrew the Interim National Government of the late Chief Ernest Shonekan on 17th November 1993 to whom Babangida handed over upon stepping aside on 26th August 1993.

The book has its “Foreword” written by the former Director of Public Affairs at the defunct National Electoral Commission (NEC) who later became Director-General of the Nigerian Television Authority (NTA), Professor Tonnie Iredia. Its Introduction was penned by Olusegun Adeniyi, former Special Adviser on Media to the Late President Umar Yar’Adua.

“Several books have been written by different actors about the Third Republic, the IBB transition programme and the making of June 12. Some of the works have been futile journeys in whitewashing and vainglory. We the contributors to this NAPOC project have written with our usual professional objectivity and unbiased candour, not minding whose ox is gored,” said Abiodun Adeniyi, one of its Editors.

Dr. Emeka Nwosu chipped in: “Trust me, ‘Nigeria’s Aborted 3rd Republic and the June 12 Debacle: Reporters’ Account’ is a collectors’ item. Readers will find it an invaluable resource material for researchers and a treasure on the shelf of personal, organisational, institutional, and international libraries.”

Another Editor, Deba Uwadiae, explained: “This historical project has been put together by a medley of veteran political journalists, many of whom have moved on to other callings within the country and internationally. Nevertheless, they caught the vision of contributing a body of literature capable of enriching Nigeria’s nation-building effort; and they made the necessary sacrifices to produce this invaluable work.”

Before being replicated in Nigeria, the book earlier in the year had its international edition produced and published in the United States, from where it began to trend on key global marketing websites.

Segun Olanipekun, third leg of the editorial team, said: “We were all journalists assigned by our different media houses to cover the aborted Third Republic. This book contains unpublished gleanings from our reporter’s notebooks. It has significantly revealed the many untold dramas and shenanigans that defined that portion of Nigerian history. Even then, this book goes beyond mere storytelling, it drips with razor-sharp analyses.”