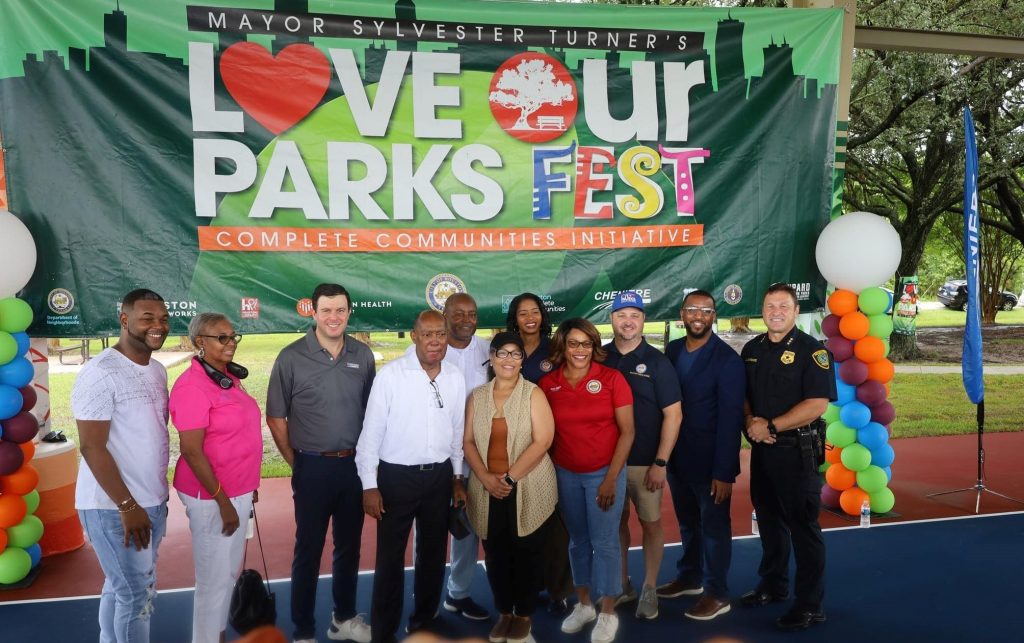 It was a warm yet rainy day in Northwest Houston, but that did not stop the celebration of the newly renovated project unveiling at Hobart Taylor Park located at the corner of Kenton Street and Bacher St on Saturday, August 27, 2022.

“I don’t want anybody in our community or city ever to feel like they are second-class persons living in a second-class community. Everybody is first-class and must be treated with dignity and respect,” Mayor Turner said.

Financial support for the project came from Cheniere Foundation, under Cheniere, an energy company based out of Houston, which provides safe, clean, and cold natural gas (methane) in liquid form. Zack Davis, the company’s Executive Vice President and Chief Financial Officer, attended the unveiling ceremony.

“Staff at Cheniere also volunteered their time to assist with the upgrades and improvement at Hobart Taylor Park,” Davis said.

Neighborhood parks are supposed to serve as a safe haven for children to visit, play, and interact with their peers domestically and internationally. Eventually, renovation and improvement are necessary if the park starts to deteriorate, or an enhancement is essential to keep the attraction level high and draw more visitors, even those who are not residents of the area.

The neighborhood residents are the gatekeepers to keeping their community safe and point out when the renovation of certain areas is necessary. They organize efforts to improve historical landmarks and parks and act against run-down buildings that often pose health hazards to the community by connecting with community and city leaders. So, seeing the residents of the area in attendance and pleased with the addition of the swimming pool, a basketball court, and an updated playground proves that Houston’s Park and Recreation is doing whatever it takes to keep the Mayor’s initiative going.

“It is about improving neighborhoods, especially having over 360 parks,” Mayor Turner said. When we improve parks, we enhance the quality of life in the Houston Neighborhoods. New American residents need new places to visit to feel at home, so such an improvement is necessary. “It is our seventh improvement with an internet connection, and it continues to bring a diverse community together, ” Mayor Turner said.

Houston is the fourth largest city in the nation, with over 2,378,146 million residents. One can find pretty much all nationalities living in the city. “We do not make immigrants or refugees feel like an outsider. I am everybody’s Mayor, and all of the city’s resources are for all residents regardless of their backgrounds,” Mayor added.

Mayor Turner also mentioned any improvement to libraries or other areas; the office of the New Americans and immigrant communities, a division of the department of Neighborhood, does an incredible job of continuing its promise of inclusivity by informing everybody on what’s going on. Mayor Turner also took the time to thank Houston Parks and Recreation team members, including its director Kenneth Allen for working tirelessly to complete this project and the previous six. Director Allen has been part of the department family for 30 years.

According to the city website, he oversees 380 parks, 60 community centers, 163 miles of trails, a forest, recreational programming, budget, and facility management, and several hundred acres of urban forest and recreation areas. Houston’s park and recreation have about 700 full-time and seasonal employees’ staff.

“The mayor’s commitment to improving neighborhood parks through the city community’s initiative has been a success. There’s a lot of focus on regional parks. The neighborhood parks, however, are usually the last ones to get any funding for improvement,” Director Allen Said.

“Mayor Turner is always taking care of the community; that’s why I don’t hesitate when voting for him. Today was about having a good time and relaxing, especially on my day off,” one neighborhood resident and a parent said.

The Lure for African immigrants to Denver Metropolitan area

By Okon Ekpenyong Believe it or not, a large population of black immigrants, specifically from ...