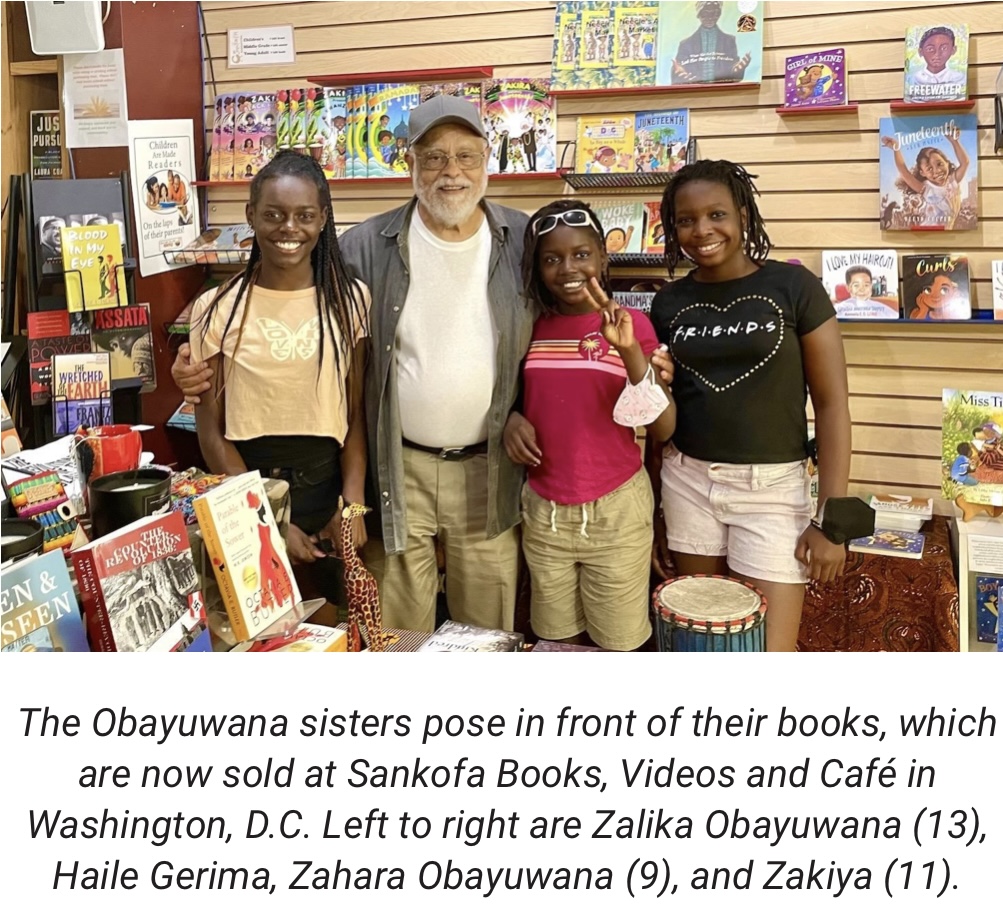 (From Columbus City Schools News)
When the Obayuwana sisters realized kids around them were not learning about the holidays they celebrated, they sought to change that through storytelling.

The three sisters got together to create interactive books with social-emotional learning, reflective questions, fun activities, recipes, and more. They hoped not only to educate but to inspire. Their storybook series titled Zakira Presents! follows the main character, Zakira, as she goes on adventures and talks about different cultures and holidays.

“This all started because in our school, we weren’t really learning about some of the things that we celebrate and that we value,” Zalika said. “So we wanted to teach communities about the things that a lot of people didn’t know about.”

This led the sisters to publish their first book back in December 2021, Zakira Presents Kwanzaa! Since then, the Obayuwana sisters have published four more books, which are available here, about Black history, Ramadan, Juneteenth, and Columbus Humane.

Zalika, Zahara, and Zakiya love it when other students connect with their books or see themselves in the stories. Zalika remembered a particularly memorable moment when she spoke to students at Eakin Elementary.

Zakiya agreed, saying she feels empowered when other kids relate to the stories.

“I think it’s really empowering when people couldn’t see themselves in people they see on TV before and then, they see someone who looks like them in stories and they connect and feel confident in themselves,” Zakiya said.

Zahara hopes these books can inspire other kids to tell their stories as well.

“When they see what younger kids or kids their age can do, maybe they will say, ‘Well, I’m that age so maybe I can do that too!’ I want them to know that they can do whatever they put their minds to,” Zahara said. 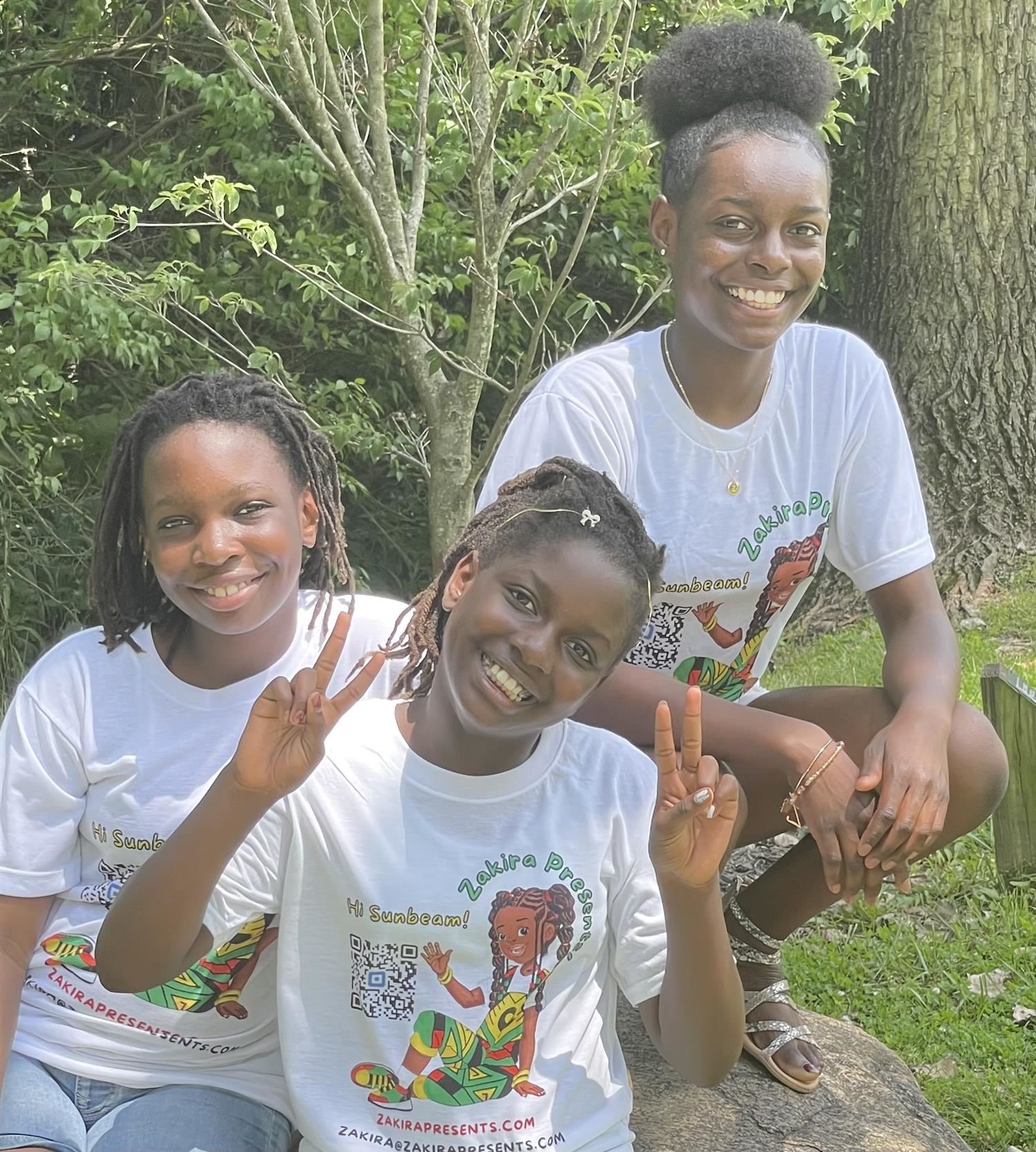 This summer, the girls have been on a book tour, most recently getting back from Washington D.C. to present at Sankofa Videos, Books, and Cafe, where they met and were given words of encouragement by one of the founders and internationally acclaimed filmmaker Haile Gerima. Zakira Presents! books are now sold at Sankofa Videos, Books, and Cafe, a milestone they are proud of accomplishing.

In addition to presentations they have done around Columbus and elsewhere, the three sisters have also had their share of recognition. Recently, Zalika, Zahara, and Zakiya received certificates from Building Responsibility Equality and Dignity (BREAD), honoring them as Junior Justice Seekers for 2022.

“That was their very first award so it was very special to be recognized by an organization where faiths of all backgrounds come together and are members to fight for equality, justice, and dignity,” said their mother, Bertha.

“It was magical and nice that we could go to the Capitol and talk about our books,” Zalika said. “I was kind of nervous at first but afterward, they were very nice and once you get into it, it’s easier to connect with people and talk about what you do.”

At Sankofa, the girls introduced the Zakira Sunbeam pledge.

“I’m a sunbeam because I’m beautifully lit by the sun and just like the sun, I promise to shine my light brightly on all things I try, put 100% into everything I do, and be kind to you and I,” Zalika read.

In addition to the pledge, Zakira’s motto is “The more we understand each other, the better friends we can be to one another.” Bertha said she hopes the storybooks can encourage empathy, understanding, and compassion toward one another.

“At Sankofa, there was a time when Zahara handed out copies of the pledge to the crowd and there were children and adults alike reciting it at the same time,” Bertha recalled. “The energy was just electric. I felt so good about what the future holds for the world.”

In the future, Zahara wants to be a scientist or a vet, Zakiya a vet or a lawyer, and Zalika hopes to become chief justice of the United States Supreme Court. For now, they still have a few more books they want to write, on topics such as Diwali, Great Grandmother Turns 100, and Hanukkah. They eventually hope to get their books in schools and youth programs across Ohio.

“It’s very empowering for all three of us,” Zalika said. “To know that we are helping communities and being role models to other kids shows that you can help people learn about things that are important to you. We also want to help educate people that they can play a big role in changing the world. We want to be role models for kids, not only in our schools but everywhere.”