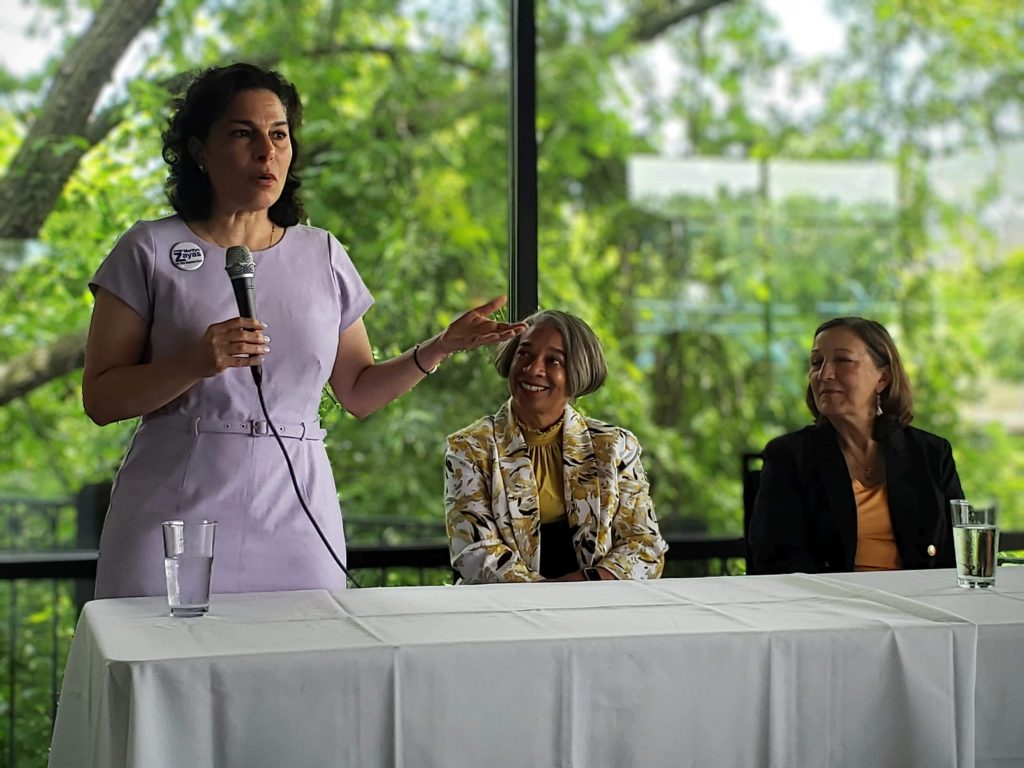 The Third Friday Democrats Luncheon on June 17, 2022, at the Boathouse Restaurant in Columbus, featured three Supreme Court Candidates Judge Marilyn Zayas, Judge Terri Jamison and Justice Jennifer Brunner. They are from various backgrounds and had the chance to tell the potential voters how justice matters for everyone, not just those with deep pockets.

The Luncheon is a venue for politically interested individuals to meet and engage with local and state government officials to discuss current matters. It takes place every Friday of the month at Confluence Park in Downtown Columbus.

Chairperson of the Third Democrat

Chairperson of the Third Democrat and Council Member from Reynoldsburg Kristin Bryant said, “We want these Supreme Court Candidates not only to get elected but to use their seats to defend our democracy. If we allow unconstitutional matters to persist, it will not level the playing field for everyone.”

“We want a candidate working for the public’s best interest rather than heading to the bench to gain popularity and power, and that’s why judges Terri Jamison, Marilyn Zayas, and Justice Brunner are here at the Third Friday Democrats Luncheon. We believe that their vision and body of work speak for themselves and can positively impact the Supreme court,” Bryant said.

“At the third Democrat Luncheon, what stuck with me was when Judge Marilyn Zayas shared her views on how the law is a great equalizer. Suppose we don’t have the right people in the seat that can understand every day in high winds. In that case, they won’t be able to hand down an appropriate conclusion of whatever case is before them,” Reynoldsburg Council Member Meredith Lawson-Roe added.

A candidate running for the state’s highest Court knows that their every decision-making on the bench impacts everybody. No matter what type of a case a judge handles, the question remains: Was it constitutional, and did the plaintiff and defendant get a fair trial?

Voters are more interested in how a candidate may rule when a plaintiff goes up against insurance companies or real estate owners, for example, regardless of their party line, rather than just checking their ballot boxes to discover which party a candidate belongs to in reality. Does the little guy stand a chance against a big corporation in Court in a net shell?

Ohio Supreme Court has seven members, chief Justice, and six associate Justice, elected during the Ohio voting process. Out of those seven, three of the Justice are democrats, and three seats are also up for grabs this year. Chief Justice Maureen O’Connor will retire from the bench this year because she reached the term limit at seventy. Therefore, her seat will be vacant as of January 1st, 2023, but not for long because both Supreme Court Associate Justice Jennifer Brunner and Sharon L. Kennedy are vying for that seat.

Judge Jamison is currently an Ohio Tenth District Court of Appeals. In her prior office, she was the Judge of the Franklin County Court of Common Pleas Domestic Relations and Juvenile Division.

“As a judge, I can write a decision that impacts people’s lives, and it is an honor to know how much empathy I can provide on that decision, especially where I come from.” While in the CPDRJ, the Judge started a ” Commons ” program for men and women behind on Child Support and unemployed. The program works with community partners to give them a chance to get back on the road to success.

The state of Ohio, especially its capital, Columbus, has a significant immigrant population. So, representation on the bench matters, especially for those with language barriers who fear they may not get a fair trial.

“The courts made some strides in terms of interpreters, but I would say more bilingual information, more implicit bias training on the parts of judges, and you know greater access to interpreters quickly,” Justice Jennifer Brunner said.

Judge Zayas is the first Latino-American elected to a court of appeals in Ohio. Before serving as a judge, she worked as an information technology manager for Procter and Gamble and as an attorney.

“Individuals presenting their cases before the Supreme Court must be thoroughly analyzed and considered. So, seeing seven justices that look alike, coming from the same cultural, educational, life experience, and family background, would give the community hopes of an equal hearing in Court,” Judge Marilyn Zayas, supreme court candidate, said.

“My judicial philosophy is rooted in my experience of discrimination and growing up in neighborhoods with people who said you’re not going to do anything with your life,” Judge Zayas said. She believes representation on the bench is critical because of the country’s diversity.

Zayas’s decision to leave Procter and Gamble as an IT Manager left many questionings why but she said, “it was a fantastic company with huge salaries and an excellent retirement. However, heading to law school was because I wanted to stand next to clients who had similar struggles as some of my families did while growing up and ensure that they had a fair trial in the Court of law. Now that I am on the bench, my hopes remain the same.”

After serving on the bench for numerous years, she is running for the Supreme Court seat because she wants to be on the other side to ensure that those perspectives are coming in and that a case at Ohio’s highest Court deserves a fair hearing.

“I’ll see something and bring it up that the other judges might have missed or would not have noticed, and that is why having different perspectives in the courtroom can change the outcome of a case. So, when it comes to the Justice system, everyone who comes to the courthouse can breathe with the hope that they will have a fair opportunity, representation, and a golden chance,” Judge Zayas added.

Justice Robert Duncan, however, became the first African American man or woman elected to the Ohio Supreme Court in 1969.

Florence Allen was the first female Supreme Court justice in Ohio and the nation in 1922. And current Chief Justice Maureen O’Connor is the first woman from either party ever elected to be the chief. So, If Ohioans elected Justice Brunner, she would then become the second female and perhaps the first Democrat.

Seventeen of the 50 State Chief Justices in the U.S., either Democrats or Republicans, are women, meaning we have come a long way. “For the first and second-generation Americans, whether they were born in the U.S or emigrated from elsewhere, they will understand that they have value and a chance,” all three judges told the New Americans Magazine.