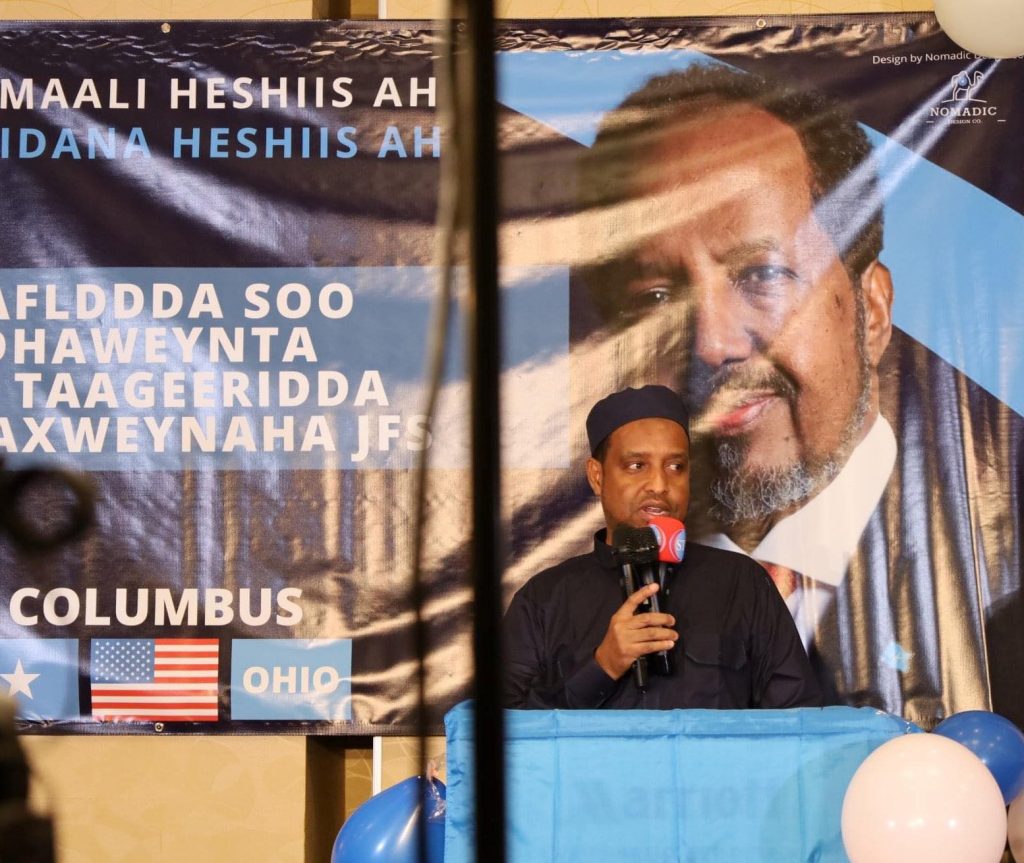 It was an emotional night because when they played the Somalian national anthem, many cried and waved the country flag as a symbol of hope for the future. President Mohamud took the oath of office for the second time on May 23rd, 2022. He previously served in the same position from 2012 to 2017. During his inauguration, President Mohamud vowed to bring unity and transparency, establish a government that works for its people, and stop four decades of food insecurities in his acceptance speech.

The night celebration will continue into July 1st, when the Somalian community celebrates its 62 years of independence from Great Britain in 1960. But since the 1980s, the country has had an ongoing civil war where the Somalian military and Government have battered armed rebel groups. Many Somalian refugees arrived in Minnesota, Columbus, and other parts of the U.S in the mid to late 1990s in hopes of a better life.

Re-establishing better Governmental systems are some changes the community hopes the new President will implement. Central Ohio has the 2nd largest diaspora in the U.S, and Minnesota is first on that list.

Kawther H Musa, from the Columbus Area Commission and host of President Hassan’s welcoming ceremony, told Apex 1 Radio that President Mohamud’s time in office would continue to boost the Somalia community’s entrepreneurship. Under the President’s leadership, many Somalian business owners living abroad have had the opportunity to travel back to the country and give back.

Terri Jamison, the Judge of the Ohio Tenth District Court of Appeals, was in attendance. State Senator Hearcel was already present and handed out several certificates to individuals in the Somalian Community who are making numerous contributions to the economic growth in Central Ohio.

“I watched in celebration from children about the significance of tonight and how vital these nations unit by working together for the common good. It gives them hope for the future,” Senator Craig said.

Senator Craig represents the Ohio 15th district which has a sizeable Somalian community. The senator honored a few members of the Somalian Diaspora with certificates honoring them for their entrepreneurship. “It was also best to recognize the Somali community’s significant contribution to businesses here in Central Ohio,” Senator Craig said.

“Regardless of where we come from, it is our responsibility as people of color to reunify and support one another’s goals by putting our differences aside,” Senator Craig added.

“It is one of the most important moments in Somali history to see such a strong community unite like this tonight,” Attorney Ismail Mohamed said. Ismail Mohamed is the owner of the Ismail Law office operating out of Columbus, Ohio, and running to become Ohio’s first Somali American legislator in the Ohio 3rd District. Mohamed earned his undergraduate and J.D from Ohio State University.

State Representative hopeful believes the new President can turn things around because “It wasn’t long ago that Joe Biden became the President of the United States after Donald Trump’s presidency. So, there will undoubtedly be significant adjustments whenever there’s a new president, just like in Somalia.”