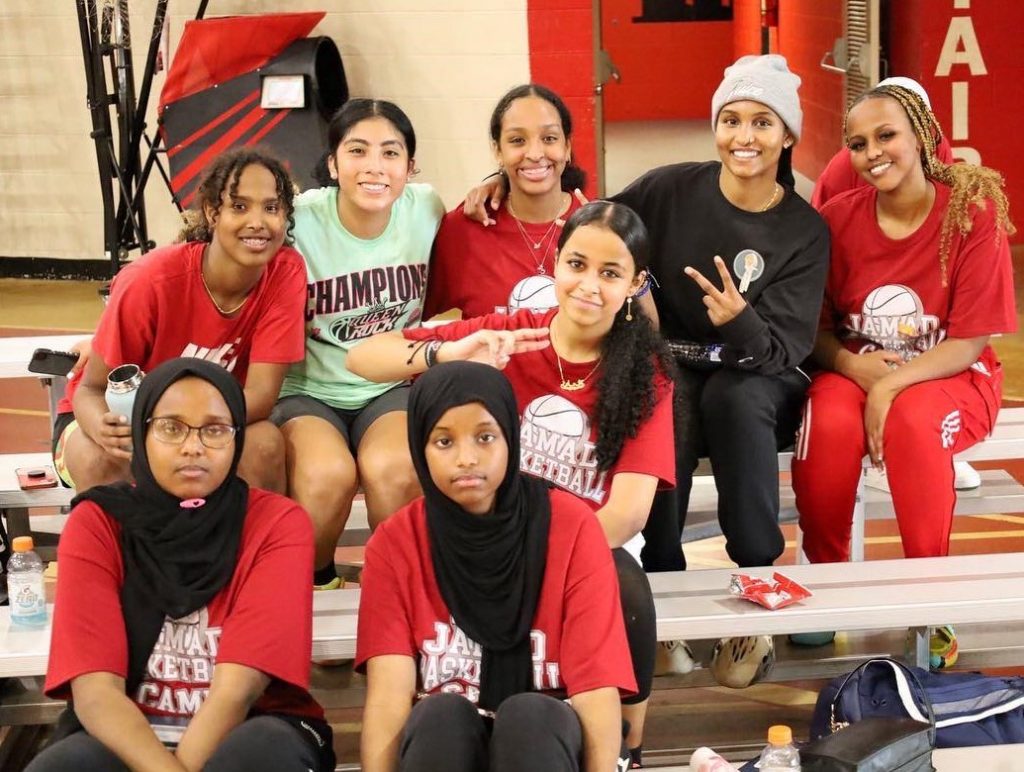 By Ganel Laconte, with a contribution from Okon Ekpenyong

Jamad Fiin, once a viral basketball sensation, has family ties to Columbus and Minneapolis. So, it will always be a family affair whenever she visits Columbus, whether for personal or business reasons.

Jamad Fiin is a Somalian-American Muslim advocating for her community through her Basketball Camp, encouraging more Muslim women to get into sports, and being a champion in women’s basketball.

She lives in Boston with her family, and in 2016, her cousin decided to film a pickup game with other peer groups at Clearance Park.

Fiin’s cousin uploaded the video on her social media page; it went viral on Twitter, YouTube, and TikTok, showing her flashing moves and ball-handling skills. Fiin dressed in a traditional Muslim hijab and dress while playing the game, and it would go on to change her life forever.

Fiin told New Americans Magazine that the video going viral was a surprise, but there are many others out there who don’t always get the recognition, and it shows that you can still do what you love while still being yourself.

Fiin’s unbelievable basketball IQ has captured many hearts and has inspired thousands of Muslim girls worldwide. Many have compared her basketball skills to that of the hall of Famer Allen Iverson. She is the captain of the Somalian Women’s Basketball Team and held the Jamad’s Basketball Camp on Saturday, May 28th, and Sunday, May 29th.

Abbas is the Chief Operating Officer for “Our Helper,” a non-profit organization working with Central Ohio refugees and immigrant families to provide resources in all aspects of human services. Our helper was one of the organizers sponsoring this year’s Jamad’s Basketball camp, which took place at Rike Center on the campus of Otterbein University in Westerville, Ohio.

Director of Help and Hope Community Center, Burhan Ahmed, said that he was happy to see Jamad Fiin’s JBC bringing benefits to his community. His non-profit organization works with youth and the community to meet their unique needs and help them thrive. Ahmed also thanked all volunteers and community members who made JBC a success.

“Early involvement in sports is essential for girls, so they learn fundamental movement skills, running, jumping, and become comfortable with their bodies,” Megan Chawanksy said. She is a lecturer teaching sports management at Otterbein University and was one of the pioneers in ensuring that the JBC took place at the school’s basketball court. Chawansky coaches some of the players who participated in the camp in Minneapolis and the Columbus area.

The New Americans Magazine sat down with Jamad Fiin to talk about inspiring young Muslim girls to get into sports and her mission to change the status quo. She’s a recent graduate of Emmanuel College in Boston and also wishes to encourage the next generation on the importance of encouraging young girls to pursue higher education.

In our culture, not many girls play sports, and at first, it was very different. The whole community was like; we’ve never seen this before or why she is doing something different, making it seem like it was eating the forbidden fruit. Fast forward like ten years in the making, it’s not foreign anymore because girls playing basketball is an international epidemic, and it is good for the sport.

Since everyone in the neighborhood now plays basketball, including the girls, all the moms are open to the idea. You can adapt to American culture while remaining true to your culture and beliefs.

“When raising young Muslim girls, it is vital to be mindful and selective about the people we bring around our children,” Fiins mother said. “We must build and nurture a community that strives to reach excellence like Mount Rushmore,” she added.

Jamad’s mother was hesitant when her daughter started showing interest in basketball because she did not want to fall victim to the outside world. Protecting her little girl has always been a top priority; that’s why Jamad is surrounded by those who have her best interests.

My cultural background and being a Muslim made me different from the other girls. I was wearing the hijab and leggings, and at first, it was weird for me because I was still working on perfecting my game.

It was a very competitive team, and I wanted to be a part of it; that’s why it was essential to practice those drills on/off the court to prove myself. I would go home; I would practice it. I would do it again and again until I was as good as the other girls. I did not want to stand out because I looked different while dressed in a traditional Muslim hijab and wearing leggings.

The viral game first reached the Columbus community on Twitter, and then after I reached the semantic community, here that’s where It spread. My cousin tweeted happy birthday to me while posting the video and the rest was history.

In the Somalian community, we all know each other. We have grown up together, and we’re closer now. My mom does events for the community, and it brings us together. Generally speaking, you will see boys on one side and girls on the other side at a park. But it is good to see girls competing with the boys at the highest level on a neighborhood basketball court, making it a more robust environment.

The camp started in 2019 with just the girls in my neighborhood playing at open gyms, and I traveled to Columbus and Minnesota to promote the mission. Having families in the Columbus and Twin Cities area made sense to kick off the camp there. Since the JBC was so successful in both cities, I asked that the program be made available to girls in other states in my community.

Jamad predicted that the Celtics would defeat the heat to advance to their 22nd NBA finals, and she was right. “I’ve always been a big Celtics fan, and I’ve always wanted to go to the games, but now it was much easier for me. I’ve met many people, and it has helped bring the spotlight to Jamad’s Basketball Camp”.

I am a Muslim girl, and that will not change. I try to be the most religious individual and make sure whatever I do is culturally and morally present. I won’t let anything in the world come between that and not change who I am. My parents used to take my siblings and me to Halaqahs and other events that had such an instrumental role in my life.

I want to play overseas in a Middle Eastern country, and I am also the Somalian National Basketball team captain.