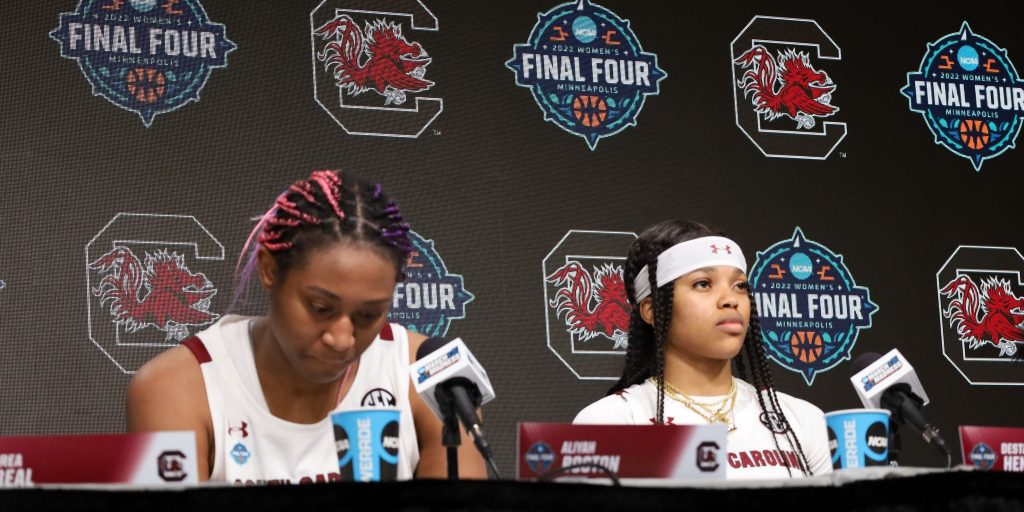 South Carolina Gamecocks epically started the title game against Connecticut Huskies with stylishness and originality; it was utterly out of control at a sold-out crowd of 18,300 at Target Center in Minneapolis.

The Huskies gave up twenty-one offensive rebounds to the Gamecocks and committed 21 personal fouls, and that became one of the difference-makers on why they lost 64-49.

The Gamecocks were playing in its 2nd title game while the Huskies were hoping to remain 12-0 after winning its first in Minnesota seventy-seven years ago. The Gamecocks lit up the scoreboard scoring 22-8 in the first half, but credit to their defense for frustrating the Huskies’ offense. UConn redeemed themselves in the second half, outscoring the Gamecocks by a 19-13 margin because they moved the ball around and eliminated shooting unnecessary shots.

Minnesota Native, Paige Bueckers, stepped up offensively for Uconn in the 2nd and 3rd quarters, and both teams were trading baskets back-to-back. The Huskies found themselves down only four points at one point, but once again, the Gamecock’s defense stepped up in the final quarter, led by senior guard, Destanni Henderson, to put the game away. Henderson finished her senior season in style, scoring twenty-six points, and stepped up her defense by holding Paige Bueckers of Connecticut to just fourteen points.

UConn fans were quiet in that first quarter, but they came alive for the remaining of the games. Sportzkelz media caught up with Uconn’s Bueckers family; they were incredibly proud of Paige and her teammates despite the loss.

When it came to the South ‘Carolina gamecocks fan, “Their energy is always with us. I feel like they’re the best fans ever and how they support us. Whether they’re here, whether our opponent’s fans outnumber them, you will always hear them no matter what,” Henderson said.

Like her Coach, Dawn Stanley did in 1991; Aliyah Boston picked up the NCAA Basketball Tournament’s most outstanding player. She had a stellar game against the Huskies, grabbing 16 rebounds and scoring eleven points. In the semifinal game against Louisville, the Associated Press player of the year grabbed 18 rebounds and added twenty-three points.

During the regular season, Boston won almost every individual award from 2021-to 2022, including Naismith, defensive player of the year. “And last year we fell short, and it’s not something we can continue to hold to, but I guess now it’s in the back of our mind because we have a national championship to hold on to,” Aliyah Boston said.

Battle of the coaches

South Carolina Coach Dawn Stanley won her second title game after winning it all on her first trip in 2017. Meanwhile, under Head Coach Geno Auriemma, Connecticut came into the game 11-0 and was playing to win its championship game. Uconn’s first title was in Minneapolis at Target Center.

“I’ve been in this situation a lot against many coaches, and I’ve taken the same approach with everyone. It’s not about them. It’s not about me. It’s always — it’s UConn versus South Carolina,” Coach Geno Auriemma.

As previously mentioned, UConn is the winnest Division 1 Women’s Basketball program in history; they were 11-0 before losing a heartbreaking to South Carolina. They appeared in fourteen straight final four, unheard of, so Coach Geno Auriemma and the UConn squad should be proud of their accomplishments. Losing in the title game is hurtful; ask South Carolina Head Coach Dawn Stanley she will tell you because she was the star player on the Virginia team that lost in the 1991 title game against Tennessee 70-67 in overtime.

Uconn defeated two #1 teams, defending champions Stanford to play in the title game, and took down NC State in double overtime in the elite eight for a chance to head back to the final four. It was a heck of a season for a team that battled many injuries to finish as tournament runner-up. “It was an amazing weekend. To be here with my team and spend more time with each other, build more memories, and do it at home was amazing,” Paige Bueckers said despite the loss.

Coach Geno’s statement to the media on April 2nd before the big game on April 3rd on coaching the big game, especially for someone who has eleven titles. “You can coach the best game of your life and lose. You can make the most mistakes you’ve ever made coaching a game, and your team will find a way to win,” Coach Geno Auriemma said.

“Continue to encourage yourself, continue working, continue believing in yourself. You know it starts at a young age, so never be discouraged at any point, and always keep pushing,” Brea Beal said.

You must Work hard, also believe in yourself, and if you ever get a chance to be in this environment at a young age, start getting the vision to be here one day,” Zia Cooke added.