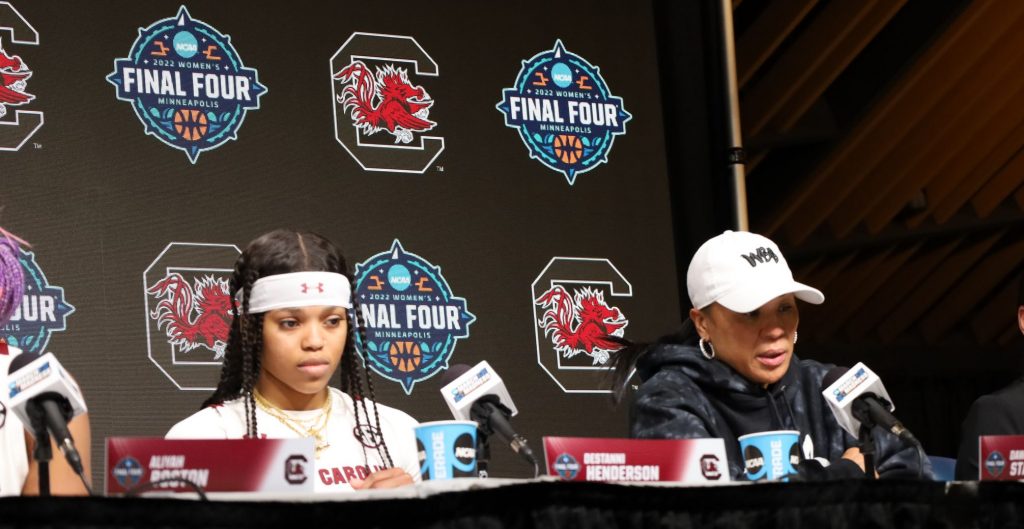 By Tonya Kelly (Sportzkelz Media), with Contribution and pictures by Okon Ekpenyong

There were many different narratives during the final four weekends. It started with acknowledging 50 years of title nine, celebrating Women’s rights in sports, and allowing women to get the same recognition as men.

You had the hometown girl, Paige Bueckers of UConn, making it to the national finals game and losing in such a fashion because you had Aliyah Boston, who took the game by the horn. She played an excellent game defensively, and then senior Guard, Desanti Henderson, added twenty points to help the Gamecocks win their second National Championship title 64-59.

South Carolina played both sides of the board and played their heart out. Then you had head coach Dawn Stanley, who had been here before winning it all in 2017. It’s hard to get down to two teams out of 68 teams. It means you’ve made it; it shows the strength of your schedule.

Teamwork was an essential aspect of South Carolina’s strategy. It also shows the strength of the coaching staff and the athletes. The Gamecocks felt they would need to play old-fashioned basketball to be a championship team. Coach Stanley made sure that each player gave it all.

It is okay to have individual stats and accolades, but you still play as a team. It does not outshine the other; you all make sure you get what you need to play. I love the fact from a fan’s perspective that the crowd like this was something beautiful to see. We were coming back from COVID and almost missing two years of not having any fan experience. Last year, Stanford won the title game after defeating South Carolina, and it was spectacular to see another program shine on the biggest stage.

It was great to see legendary UConn Coach Geno and South Carolina Coach Dawn Stanly battling it out. Witnessing an African American, black excellence performs at the highest level in such a high fashion and come away with a win in front of 18,300 people was a moment of glory. Both semifinals’ games and the title game saw over 18,000 in attendance, which was a record for the women’s final four. It was one of the highest-watched women’s events in many years.

Women sports don’t get the advertising dollars, they don’t get the marketing they should, and to see ESPN platforms go out and say this year we’re going to show the game primetime. It proves that women’s sports have come a long way, but the fight remains.

Again, witnessing South Carolina raise that championship trophy was just another testimony that you know things can change. But it will take more than one voice, more than one person, to change the narrative and get people to understand what women’s basketball means to sports in general.

The game does mean so much to sports fans, media, and all-female student-athletes worldwide. It gives them hope that things are going to change for the better. We went to see Brooke Baldwin, a former CNN Host interviewing three WNBA players; Sue Bird, Laird, and Breanna Stewart. The title of the show was #seehergreatness, presented by Buickusa. It meant seeing all these women, 68 women’s basketball teams, come out and give their all this year. The final four teams Louisville, South Carolina, Connecticut, and Stanford played an excellent game in Minneapolis. It was great hospitality; the end of the NCCU was the hospitality; we met many different people and facets, and it was just great overall.