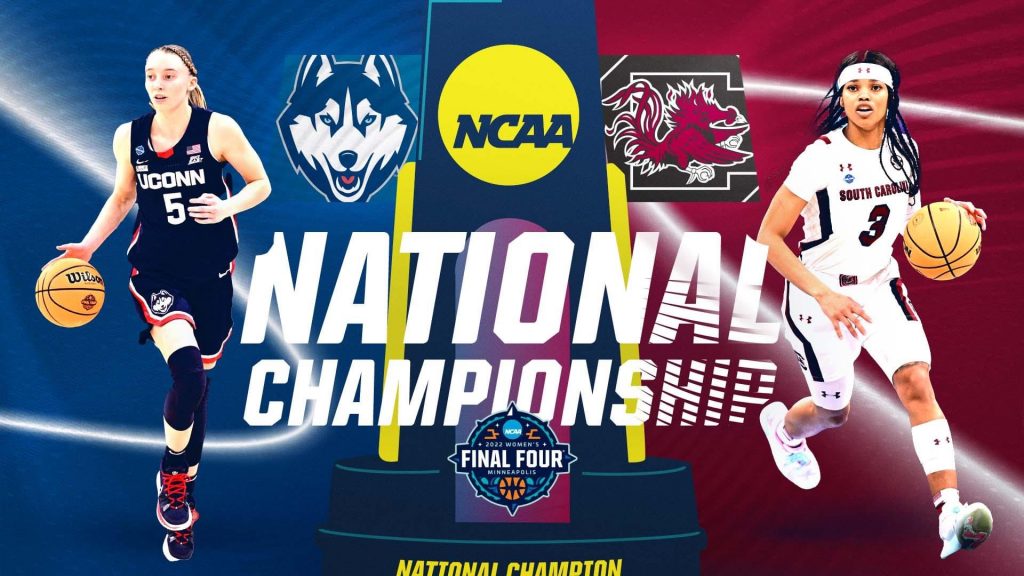 By Okon Ekpenyong and Tonya Kelly, MEd (Sportzkelz Media)
Both games were terrific at Target Center in Minneapolis, Minnesota, on April 1st. The remaining four teams, Louisville, South Carolina, Connecticut, and Sanford, reflected where basketball is heading in years to come. It is not so much about the present but the future of basketball, and many women love playing with their camaraderie and why they play.

In the first game between Louisville vs. South Carolina, it was great to see South Carolina Coach, Dawn Stanley in the flesh and see the humbleness she has for her team and put the culture up even with her hat included in her outfit. It was, you know, her unique style; even how they play, they played with their togetherness, and like you said last year, it was them, you know, going home. Louisville lost to Carolina 72-59.

The Coaches also praised the players, and It was also great to see the girls speak highly about their coach. Uconn’s Coach GENO AURIEMMA sometimes comes off with that egotistical man’s expression, but watching him in a different light as more soft and compassionate was beautiful because it wasn’t always that way in recent years.

Witnessing the culture of the players on the UConn team, which does not have any bearings on how they played, it’s just to see the references to different skin complexion. To witness those similarities with culture and know that reflection representation on a UConn team was simply beautiful.

Everybody has their day, and Louisville met their match when they played South Carolina. Louisville senior forward Emily Engstler collected 23 points, but her game-ending foul troubles caused her to leave the game a bit early. That was the difference-maker as she tried to stay above the points and keep South Carolina from extending their lead In the game.

I was shocked that Stanford did not win this game against UConn because they were the defending champion and had most of their players back from the 2021 title game. I predicted that Stanford would win by six, but UConn came out swinging in a sold-out Target Center with over 18,200 attendance. These two teams put on a show in all four quarters, trading baskets back and forth, and did not disappoint the fans. Stanford only led once, and it was by one point.

Uconn’s largest lead was eight points, but that was not the difference-maker. “I think a part of it is not hitting shots, but that’s bound to happen. You can’t make all of your shots. We could have moved the ball better,” Stanford’s Haley Jones, who finished the game with twenty points, said.

South Carolina’s star player Alyah Boston lit up the scoreboard with 23 points and finished with 18 rebounds to help her team advance to the title game against Connecticut. Boston took home the Naismith & Associate Press Player of the year but “bringing home a Championship game, I’m just really locked in on that,” Boston said.

South Carolina Head Coach Dawn Stanley is a former Hall of Fame player who was a two-time Naismith College Player of the year in 1991 & 1992 at Virginia. Stanley played professionally with the Women’s National Basketball Association, Franchise Houston Comets, and Charlotte Sting. Coach Stanley knows a thing or two about playing in the final four when she led Virginia to the title game in 1991 and played in three semifinal games. “When you’re playing for a National Championship, it is the team that can get to their habits quickly and stays there.

South Carolina will take on Connecticut in the title game after, and Coach Stanley commented on the history between the two teams. “We played Connecticut a long time ago, but they’re probably back to where they were when we played them. That’s their norm,” Coach Stanley said.

Although they lost, the Louisville coach praised her team for the remarkable season. “You start back in the spring and the summer, all the way through April 1st, and it was just an absolute joy