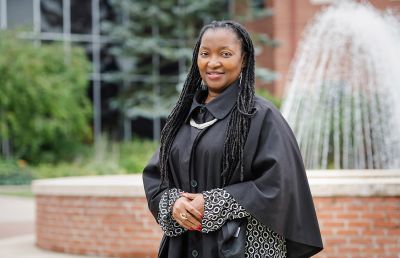 Whether advocating for new African immigrants in central Ohio or for faculty and students at Ashland University, Rosaire Ifedi leads in an understated, yet persuasive manner. That highly effective, pointed style has served her well during a 30-year career in education and as a board member of several significant non-profit and faith-based organizations.

Ifedi credits her success to answering a call to “minister to individuals” and to a belief that she was “destined” to be at Ashland, where her wondrous rise from student to president of the faculty senate is unprecedented.

Originally from Nigeria, where she taught at the high school and college levels, Ifedi first came to the U.S. in 1987. Having located in the Columbus, Ohio, area, she started out as a substitute teacher in the public schools and then moved on to correctional education. It was there that her fortuitous path to AU began with a simple appeal. “They asked me to please get my licensure as a principal and that brought me to Ashland University,” she said.

Ifedi went from licensure student to adjunct instructor to a graduate of the doctoral program in educational leadership, all in an eight-year period. There was never a grand plan to earn such a high-level degree. She just continued to follow a journey she felt called to. “Some of the professors, we clicked, and one of them asked me to come back to do my doctorate. None of these things I was seeking … they just kind of found me,” Ifedi explained.

Having impressed professor after professor during her doctorate classes, Ifedi accepted an offer to become an AU faculty member. Since 2008, she has been teaching graduate program courses in the Schar College of Education, covering subjects such as curriculum, qualitative inquiry, education of English Language Learners and global perspectives in education as a tenured associate professor.

Ifedi’s scholarship syncs with a passion that is near and dear to her heart – African immigrants. She studies and writes on the intersections of race, identity, gender and achievement, and has authored two books, “African-Born Women Faculty in the United States: Lives in Contradiction” and “My Darling Jesus! A Simple Walk With an Awesome God.”

Ifedi has been extremely involved in the Columbus community as an activist for various African immigrant-focused agencies. Her involvement has included leadership roles for Gateways for Growth Steering Committee, Ohio TESOL (Teaching English to Speakers of Other Languages), the Central Ohio End Ebola Taskforce and the Franklin County 2020 Census Complete Count Committee. Most notable, Ifedi was appointed by former Gov. John Kasich and then elected as the inaugural chair of the New African Immigrants Commission, serving in that role from 2017-19 (she remained on the commission through December 2021).

Ifedi landed another unexpected role – president of the faculty senate at AU. She was nominated and elected as first the vice president and now the president of faculty senate. Ifedi leads a body that creates legislation for curriculum, academic standards, faculty welfare, student life and more. In this role, she also works with administration and Board of Trustees in a shared governance model to make healthy decisions that benefit all constituencies. Though there are “many challenges,” she finds it very worthwhile and hopes in some way to pay back those faculty who first gave her Ashland’s trademark Accent on the Individual and “to make this place better than we found it.”

An ordained pastor at Christ International Community Church, Ifedi is grateful for her calling and says “that every achievement is by God’s grace.”

While Ifedi’s discovery of Ashland was an unconventional path, it ultimately has been a rewarding one for both her and the University. (Culled from Ashland University, Ohio New Center).