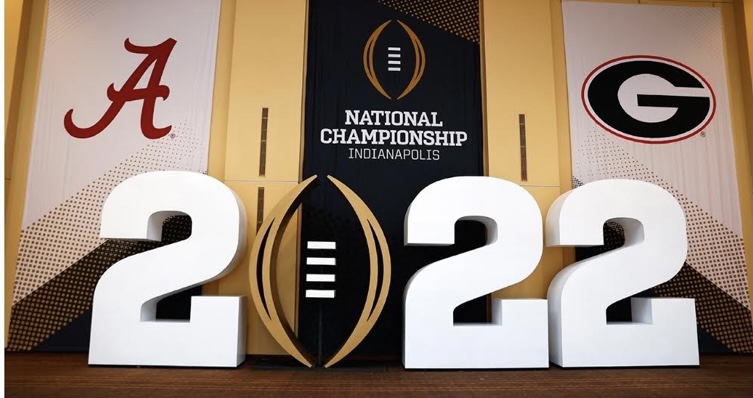 In the last 150 years of college football only five times has the National Championship game been played by two teams that have played each other earlier in the season. Tonight will make six, and the first in the College Football Playoff Era as #1 Alabama and #3 Georgia will play again, after just facing each other on December 4th in the SEC Championship game when Alabama took a dominant victory of 41-24. This time they will be competing for a National Championship at Lucas Oil Stadium in Indianapolis.

History is on Georgia’s side, as all five rematches with national title implications, the loser of the first meeting has won all five second games in somewhat dominant fashion. This being Georgia’s second playoff appearance. The first was in 2017 when they faced Oklahoma winning the game by a score of 54 – 48 only to lose to Alabama in the National Championship game. Georgia would like nothing more than to revenge the losses from that 2017 National Championship and the 2021 SEC Championship and finally get over the hump of loosing to SEC rival Alabama.

Although Alabama has done nothing but win and show their true dominance of college football winning the National Championship in 2009, 2011, 2012, 2015, 2017, 2020 and made seven playoff appearances since the beginning of the College Football Playoff Era. Alabama will be looking to continue their dominance and add yet another National  Championship to their already decorated program.

The Bulldogs juggernaut defensive lineman Jordan Davis will be a great match up to watch as he will have the challenge of containing Heisman Trophy winner Bryce Young and the physical running attack that ran for 204 yards in the Cotton Bowl against Cincinnati.
The kickoff off is scheduled for 8:00pm EST on ESPN.
**My Prediction**
GA Bulldogs   38Crimson Tide 29