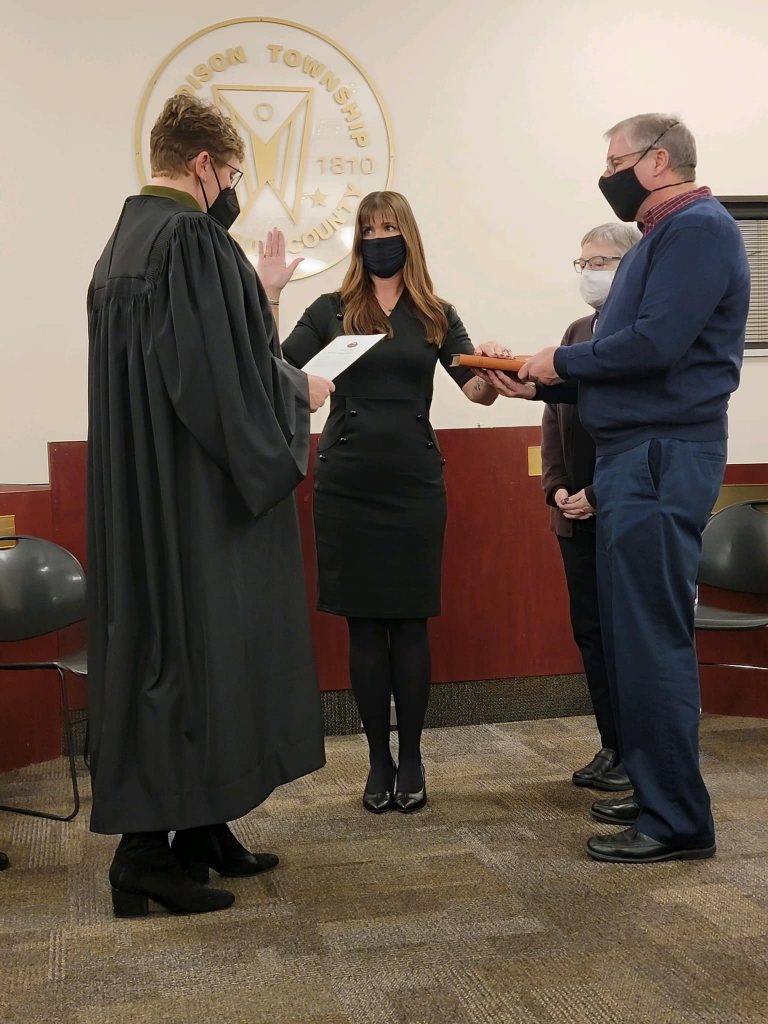 Friends, colleagues, the community, and elected officials packed the Madison Township Administration Building the evening of Thursday, December 30, 2021, for the Katherine Chipps Swearing-in Ceremony in Groveport, Ohio as Trustee of the Madison Township.

Trustees must vote based on community needs to make it feasible for residents to live and work in Madison Township. They also are in charge of hearing zoning concerns with changes and revisions. They also governed the asset of endowments, charitable foundations and can employ fire responders or partner with neighborhood jurisdiction for law enforcement protection.

When asked during her campaign for the Madison Township Trustee what she would do if elected, she said: “I would like to work on gaining grant funding to improve the roads in our neighborhoods in the unincorporated areas of the Township. I will work with our Police and Fire Departments to ensure the safety of our neighborhoods and to get the needed equipment and ‘Manpower’ they need.”

“I’ve been chair of the citizen advisory committee during the past two years, and we work directly with community members to bring back issues to the township trustee. I’ve been out in the community talking to residents and found out issues affecting them in any way”, Chipps said, including to work on keeping campaign promises.

Katherine Chipps attended George Washington University in D.C and Ohio Dominican University in Columbus, graduating with a Bachelor’s degree in Business Administration and Management. She worked as a director of the Regional Services Division for the Ohio Secretary of State during Governor Theodore Strickland’s time in office for three years. In 2016, she served as a Legislative Assistant for Ohio State. Since then, Katherine has been the CEO of Grass Roots Strategies, LLC and Friday’s Creations.

“I was honored by the turnout tonight; everybody who came out, some of them we helped get them elected,” said Chipps.

“I’ve been out in the community talking to a resident about everything affecting them in any way, from properties questions, neighbors parking on their lawns, and the roads being in terrible conditions needing to be repaved or resurfaced,” Chipps added.

Madison Township is working on new firefighters’ contracts, and Chipps is thrilled about that since the fire department is the third largest in the county. The Township First responders serve the cities of Groveport, Canal Winchester, Pickerington, and Villages of Obetz and Lithopolis.

Chipps added that “The fire department was very involved in my campaign by getting the word out; the local 2507 even endorsed my candidacy, and I was able to advertise that, and I thank the residents of Madison Township for putting their trust in me in this role, and I promise that I will do my absolute best for them.”

Chipps has worked on countless other campaigns. She was the campaign manager for Judge Sheryl Munson. Judge Munson is currently serving as the Franklin County Court of Common Pleas General Division.

Judge Sheryl Munson, one of the many dignitaries in attendance said, “Katherine helped me get elected the first time as a judge and is running my re-election campaign for 2022”,

Almost all of the Democratic Franklin County judicial candidates that the Apex 1 Radio, New Americans Magazine, and Legal Angle with Emmanual Olawale interviewed during the 2020 and 2021 Election season, Chipps once worked on their campaign one way or the other.

“So, now it is great to see her having the opportunity to get elected and to serve, and I am honored to be her friend and grateful to be a part of this whole thing,” Judge Munson added.

“Katherine can do the job; she is competent, and, most importantly, she is committed to service. Madison Township and its residents are so vital to the quality of life of our families and children,” State Senator Hearcel Craig representing Ohio 15th District said.

“I was very pleased” tonight to see many people showing up on her behalf, including elected officials, community, representatives, and other Trustees. It shows her passion for services and commitment to the family and children in Madison Township,” Senator Craig added.

Council Member for the city of Reynoldsburg, Stacie Baker, also added that “Katherine has put in the time working behind the scenes helping other candidates get elected and she will serve the residents of Madison Township with the best of her ability.”

Ohio has 1308 townships, and the name “Madison Township” can be found in twenty counties spread across the state. Some Townships don’t have area commissioners; they have a board of Trustees. Township Board of Trustees serves a four-year term, and they serve as the community’s voice between the city council and its residents. Katherine Chipps will “serve” in the Madison Township located in the southwest corner of Franklin County.