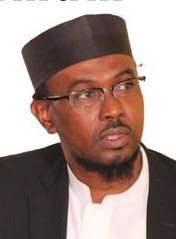 As investigations continued into the missing Somalian American Imam, Mohammed Hassan Adam, the Columbus Police Department has confirmed that the body found inside a missing yellow van was that of the “missing” Imam of Masjid Abuu Hurira in Columbus, Ohio.

Meanwhile, the Somali community is offering $10,000 to anyone that could lead to solving the case.

Dr. Mohammed Hassan Adam was last seen on Wednesday, December 22, 2021, around 6 pm, after leaving Al Huraira Mosque, where he was the Imaam.

A missing person report was not filed until Thursday when families, friends, colleagues, and community members could not reach him after trying for several hours. Community leaders then held a press conference at Abu Huraya Mosque Imam in Columbus around 11:30 am on Friday, December 24, 2021, asking for public help.

At a briefing, the Deputy Chief Tim Becker said, “we discovered a body deceased in a wooded area and a vehicle, and homicide detectives are on scene. The coroner’s office will be here, processing this as a homicide investigation. This is in conjunction with a missing person investigation started by Columbus Police on December 23, 2021, and they have been tremendous community support.”

Chief Becker added that volunteers and members of the Somalian Community spotted the vehicle and reported it to the authorities.

Hiiraan Online, a well-known Somalian online newspaper, stated that sources closed to the magazine did confirm that Dr. Hassan, a former respiratory therapist at the Ohio State University, was probably a victim and a hostage of an unknown group of a gang.

The source added that those who targeted the Imaam tried using their victim’s credit or bank cards, but in this case, it was declined. At one point, the individuals called from Hassan’s phone requesting money. Authorities could not confirm this report because it is still an active investigation.

“Today, the Somalian-Americans have lost “a great friend” faith leaders and colleagues. I’m confident that everybody that knew Dr. Hassan will agree that he will be greatly missed in our community,” former candidate for the Columbus Public School Engr Mohamed Farah said.

Dr. Hassan often appeared on “Shaaciye TV,” a Somalian Broadcasting and media production company based in Columbus, touching on all topics, but addressing mental health in the community was one of his crucial concentrations.

“We as faith leaders are ready to stand by and support his family and our community in Ohio, by bringing the perpetrators of this heinous crime to justice,” Somalian Community member Burhan Ahmed said.