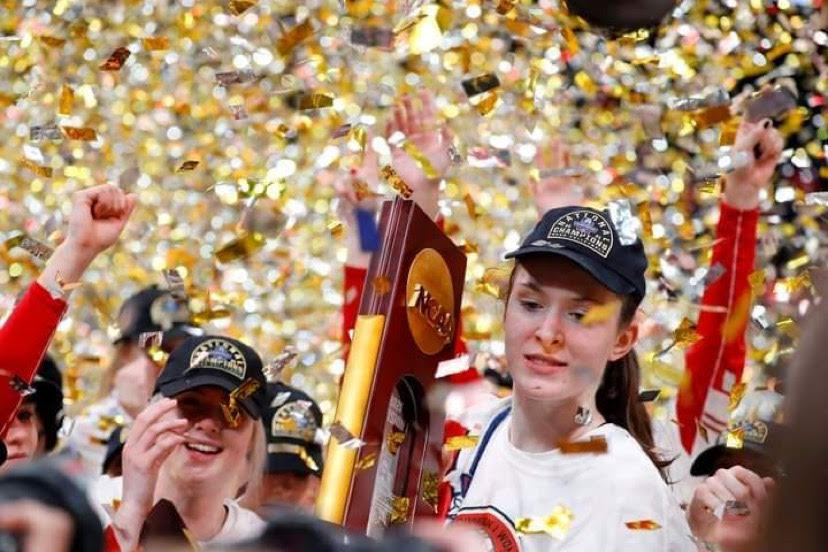 “It was a record night with 18,755 in attendance, making it the largest crowd in NCAA Volleyball championship,” Greater Columbus Sports Commission said. It was also the second time Nationwide Arena held both the semi-final and championship game, after first hosting it in 2016.  Stanford University walked away with their 7th title defeating Texas 3-1 then.

It was the 12th time that the conference walked away with a title, and this year’s final game was a rematch of the 2000 championship game between the two teams when Nebraska defeated Wisconsin 3-2 to claim their 2nd title in the school’s history.

In 2013, Wisconsin returned to the title game but unfortunately fell short to another Big Ten opponent, Penn State. In 2019, they lost to Stanford University, giving the Cardinals nine titles, the most in DI history. But this year, the Badgers came in with a chip on their shoulder and sailed to victory, winning 3-2 to claim that first-ever trophy in the school’s history after knocking at the heaven doors on their fourth try.

First, Nebraska’s front and back core proved problematic for the badgers. Nebraska took the first set, winning 25-22. The Badger’s struggled earlier with their passing and defensive transition but managed to escape with a critical win in the second set 32-29. Both teams committed several service errors throughout the game, but the Badgers continued to battle back, even stealing the third set 25-23. Nebraska, however, would go on to even the series at 2-2, winning 25-23. Freshman sensation Lindsay Krause and Batenhorst for the Cornhuskers were among the difference-makers in the game. Badgers powered to 24 blocked in the game overall, and their defensive mindset helped them prevail in the fifth set to seal the victory.

Nebraska has five NCAA D1 Volleyball Championship titles under its belt, capturing it in 1995, 2000, 2006, 2015, and 2017.  The Cornhuskers battled the University of Pittsburg Panthers in the semi-final for a chance to play for the title game. It was the Lady Panthers’ first Semi-final game in school’s history.

How did they get here?

Pittsburg defeated Purdue 3-1, while Nebraska eliminated Texas 3-1 to play in the semi-final game.  Nebraska then defeated Pittsburg 3-1, and Wisconsin took care of Louisville’s #1 team, who came into that game undefeated for the season to advance.

During the game, Megan Kilgore, the city of Columbus auditor, sent out a few posts telling everybody how special the night was going. “If you are not watching this slingfest on TV, you’re missing something special,” and Kilgore added that no one does NCAA championships like Greater Columbus Sports Commission.

A Statement from a vivid fan

The New Americans Magazine reached out to Kilgore, and this is what she had to say: “I’m just a fan!  Sports tourism is a “great” revenue generator for Columbus. I’m thrilled that we were able to host another NCAA tournament,” Megan Kilgore said.

Jesse Ghiorzi, who works in the marketing department for the Greater Columbus Sports Commission, provided a statement to the New Americans Magazine about the 2021 NCAA Division I Women’s Volleyball held at the Nationwide Arena in Columbus OH.

Statement from Greater Columbus Sports Commission “It’s always exciting when sports events come to Columbus. Each one is an opportunity to show what makes our community special. We are immensely proud that Columbus set the record for the most attendance in NCAA Women’s Volleyball Championship history. This week, a lot of collaboration went into mainly Ohio State and Nationwide Arena but so many other people and companies in our community. The estimated $14MM in economic impact and 18,755 fans in the record crowd shows how big of an event this is. We love highlighting incredible women athletes, and this event is a great stage to spotlight them.