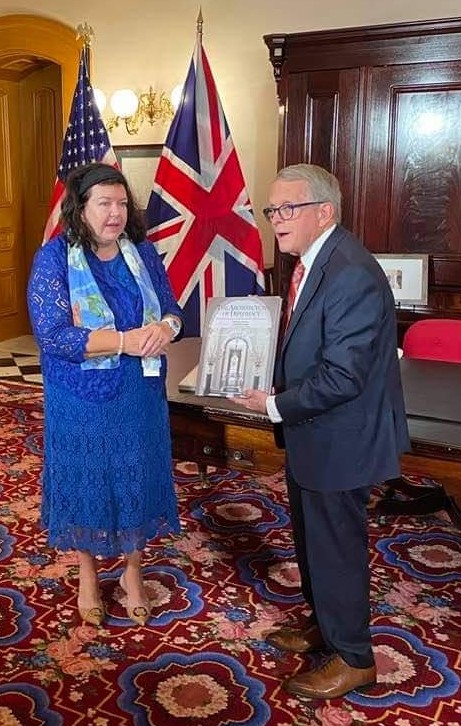 The British Ambassador to the United States Dame Karen Pierce has announced a plan for a trade mission to Ohio that will be particularly devoted to minority businesses.

Speaking at the end of a visit to the Ohio State Governor Mike DeWine, the Ambassador Dame Karen Pierce said, “We are suggesting a trade mission particularly devoted to minority businesses and will be very interested to take all of that forward with the Governor and his team.”

“We are starting to be very interested in the UK in what we call leveling gap which is, quite frankly, what you do here about people, opportunities, and equal access to opportunities. We believe that it is very important part of our future action.”

On boosting small and medium sized enterprises, Ambassador Dame Karen Pierce said that the United Kingdom will be putting “more emphasis on digital, because this is the way of the future. There is a lot we can do together.”

Speaking on agriculture, she said “we have been very pleased with the level of support for a free trade agreement that we’ve had from agriculture associations. It’s a win-win ultimately and we hope we can restart the negotiation soon.”

“We signed the London Stock Exchange ELITE program in December 2019. The pandemic has slowed the migration of the headquarters to Cleveland. But the work is ongoing. We are targeting minority businesses to continue the relationship of helping those businesses, to counsel on access to capital and get more access to market in Ohio and the UK.”

The United Kingdom is Ohio’s largest European investor, with 14 percent of the state’s international investments. Nearly 600 British-owned companies have a presence in Ohio and its companies directly employ more than 37,000 Ohio residents.