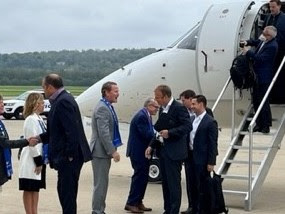 Ohio Governor Mike DeWine has assured that Cincinnati, Ohio will be a perfect host city for the 2026 FIFA World Cup, during a meeting with members of FIFA and the U.S. Soccer Delegation in Cincinnati as the city bids to host the FIFA World Cup games in 2026.

Cincinnati is one of 17 cities in the United States vying to be a World Cup Host City for the 2026 international event at Paul Brown Stadium.

Of the 17, 10 host cities will be chosen from the U.S. with the remaining host cities from Mexico and Canada.

“This bid is very exciting and important for Ohio. Having a world class sporting event where the whole world is watching, you can’t get any better than that,” said Governor DeWine.

“The entire state of Ohio is behind Cincinnati, and we know they would be the perfect host for the FIFA World Cup.”

The 2026 FIFA World Cup will be the first time that the expanded field of 48 teams will play in the World Cup, with 80 total matches.

Hosting the 2026 FIFA World Cup could generate more approximately 40,000 jobs and $90-$480 million in revenue per city according to The Boston Consulting Group (BCG), a leading global management consulting firm.

The final host city selections are likely to be announced in early 2022.