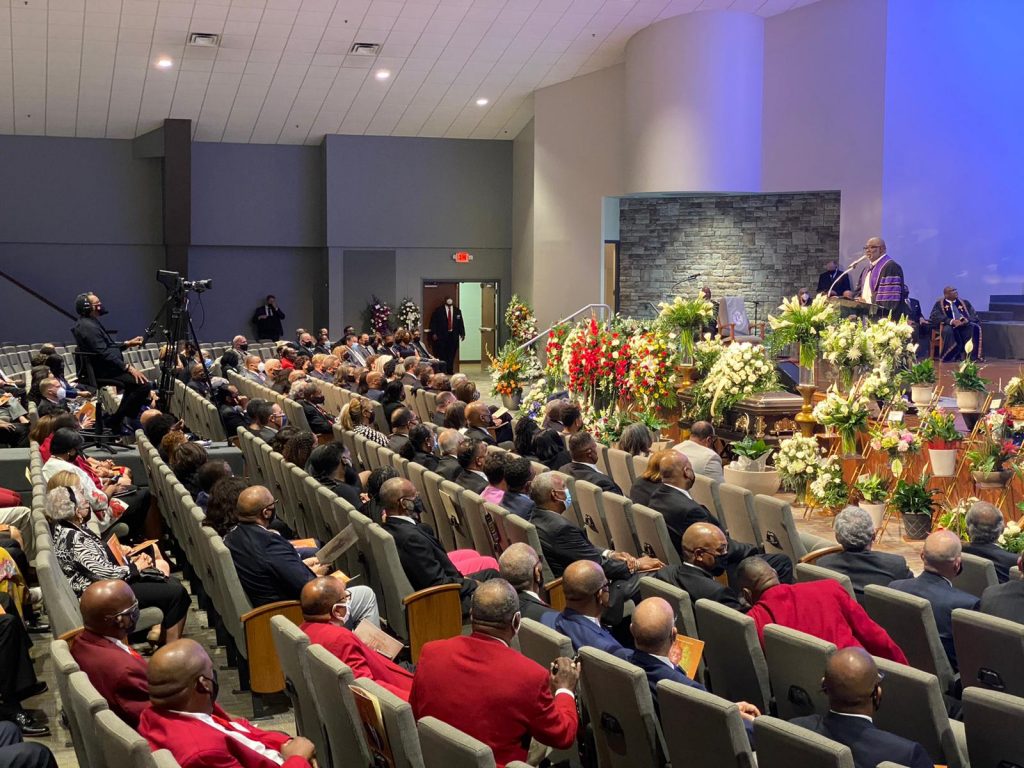 By Okon Ekpenyong and Jessie Dingess

In an exquisitely crafted eulogy, the Speaker of the United States House of Representatives Nancy Pelosi described the late Otto Beatty Jr. as a veritable champion. Nancy Pelosi was addressing hundreds of mourners who turned out Friday, May 21, 2021, to pay their last respect to the fallen Ohio politician.

“His work lifting up minority businesses and getting out the vote in Central Ohio were legendary,” said Speaker Nancy Pelosi, referring to Otto’s economic and civic empowerment legacy.

According to the House Speaker, the former State Rep made a difference in his leadership by striving to defend the dignity and the respect of the rights of every American.

Speaker Pelosi said the former elected official helped to ensure that all Americans could pursue their American dreams which was the reason he was honored the day he passed by three flags flying at the Capitol in Washington DC.

Nancy Pelosi found a connection between Otto’s leadership and the civil rights movements which the fallen former elected official’s grandmother was part of, having been selected to stand beside Dr. Martin Luther King as he delivered his ‘I Have a Dream’ speech on the Mall.

Otto had tapped hope to lead a good course in his life as a politician from his grandmother’s experience, according to the Speaker.

Present at the last moments with Otto Beatty Jr., were the representative of President Biden, Secretary of Housing and Urban Development, Marcia Fudge who doubles as friend of the Beatty’s, Senior Advisor to the President of the United States, Cedric Richmond and assistant House Speaker Katherine Clark. Other house members (some, former colleagues of the deceased) with significant positions and from different states, thronged the event to bid farewell to the fallen businessman and politician.

Otto Beatty Jr. was the husband to Joyce Beatty, US State Representative and Chair of the Congressional Black Caucus. He passed on Friday, May 14, 2021. He left behind two children, a son, Otto Beatty III and a daughter, Laurel Beatty, grandchildren, and his political constituency which he served with admirable commitment.

Loved ones, current and past central Ohio politicians, and members of Congress paid tribute to former State Representative Otto Beatty Jr. on Friday May 21, 2021.

According to former Mayor Michael B. Coleman, a career lawyer and businessperson, friends remembered Otto Beatty’s legacy as a “Black person who epitomized Black power in Columbus.”

Congresswoman Joyce Beatty’s (D-Columbus) husband was honored as a leader, servant, and advocate for Central Ohio’s marginalized and underprivileged.

According to Nancy Pelosi, while Joyce Beatty is now a member of Congress, Otto was well-liked by Washington’s elite.

“In every position, at every turn, Otto was a champion for economic and civic empowerment — and his work lifting up minority business and getting out the vote in Central Ohio was legendary.”

Otto Beatty was born in the year 1940 in Columbus, Ohio.

The honorable Otto Beatty Jr. grew up in a community where his family was dedicated to entrepreneurship, advocacy, politics, civil, and voting rights.

At an early age, he wanted to make a difference representing the people. Otto worked growing up in the family business. He graduated from Howard University with a BA and an MA in business administration, as well as a JD from The Ohio State University College of Law. He was an accomplished athlete in all sports, awarded all letters in college.

Otto went on to play for the Denver Broncos, afterwards returning to Columbus, Ohio to attend law school. While in law school, he went on to run for Ohio State Representatives.

He was the head and President of the Franklin County Trial Lawyers Association as well as an attorney for the Black Elected Democrats of Ohio. That organization would later be known as the Ohio Legislative Black Caucus. With a great success he defended the first two cases of discrimination filed in Ohio.

Although there was extremely limited opportunities for African Americans to be lawyers in major law firms, Beatty felt the need to represent everyday people. He went on to become Deputy Director of the legal Aid Society in Central Ohio, with his office currently in today’s King-Lincoln District, on the first floor of the old Lincoln Theater.

Having many successful accomplishments in his legal career, including opening his first law office a block away where he learned business, politics, and community organizing, Beatty became the first African American to buy blocks of downtown property in Central Ohio where one of the largest Black law practices is held. This had jump started many now prominent lawyers today. I

n Beatty’s early legal career, he was involved in many landmark legal cases and appeared before the Supreme Court on civil liberties cases. Such legal cases as the right to obtain bond for release in criminal cases in Ohio.

His legislative career spanned over two decades, where he was a major contributor to the successful creation of the Minority Business legislation. He opened the doors for minority businesses in Ohio through House Bill 584. For decades, he spearheaded, and was the go-to person on local political parties, who launched and often funded the teams that delivered the Get Out the Vote efforts. This led to victories for Central Ohio’s Democratic Party tickets.

Beatty served as the Chairman of the Franklin County Democratic Central Committee as a member of the Executive committee board. He teamed up with his wife, Congresswoman Joyce Beatty, forming their commitment to fighting for justice and standing up for everyday people, especially minorities.

Appointed by two mayors, Beatty served on the Downtown Commission as Vice Chair. While serving, his work led to new economic development for Central Ohio.  While always fighting to keep the memory and legacy of the Beatty family, he was recognized in shared strategies and successes with President Obama and many other leaders across the nation. His legacy will now live on through his wife, children, and grandchildren.

Beatty was influenced and destined to his political career in being surrounded by his grandmother, Civil Rights icon and friend of Dr. Martin Luther King, Jr., Mayme Moore.

Beatty valued and greatly loved his journey and legacy, and always amplifying the words of Whitney Young- “I am not anxious to be the loudest voice or the most popular, but I would like to think I was an effective voice of the voiceless, and an effective hope of the hopeless.”

Many young men often crowded around Beatty to hear his inspiring stories of “How to best succeed.”

Over the decades, his range of services spanned several diverse leadership roles and organizational memberships. This includes serving as a member or past Chairman of the Board for Columbus State Community College, Chair of Robert B Elliot Law Club, Ohio Commission of Minority Health, and The Franklin County Trial lawyers. He was a dedicated and lifetime member of the NAACP, and Kappa Alpha Psi Fraternity, Sigma Gamma Psi. Beatty was a great and generous supporter of The King Arts Complex and donor of the land to the City of Columbus for developing The Mayme Moore park, in honor of his late grandmother.

In 2020, Ohio Dominican University honored Beatty with an Honorary Doctor of Laws, the Columbus City Council also awarded him with the James Poindexter Award.