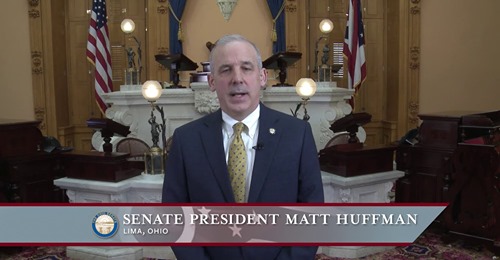 Ohio Senate has voted to override the Health Order Oversight Bill 22 vetoed by Governor Mike DeWine in a battle of power on promulgation of emergency orders during a situation as presented by the corona virus in the state.

“Ohioans have persevered through the pandemic of 2020. We heard from thousands of our constituents who fought to protect both the lives of their families and their livelihoods.This is why my colleagues and I in the Senate voted to override the Governor’s veto of Senate Bill 22.” ” said Ohio Senate President Matt Huffman.

On Tuesday, March 23, Governor DeWine vetoed Senate Bill 22, stating, in part that, “Senate Bill 22 jeopardizes the safety of every Ohioan. It goes well beyond the issues that have occurred during the COVID-19 pandemic. SB 22 strikes at the heart of local health departments’ ability to move quickly to protect the public from the most serious emergencies Ohio could face.”

However, Ohio Senate President said “the bill provided simply gives the people the power to review orders issued by the Ohio Department of Health. More than 30 states have similar laws, and it is time for Ohio to make this change.”

“The Department of Health maintains its ability to issue orders and respond to emergencies.  This law provides the General Assembly the ability to consult with the department and experts before rescinding an order. Senate Bill 22 represents a balance of power, not a battle for power.”

Senate President Huffman said “the General Assembly truly represents the voice of the people from district to district and town to town. The people must never feel forgotten, especially during times of emergency, when unchecked power can be used to impact lives and livelihoods.”

“I look forward to working with my colleagues in the General Assembly and the Governor’s office to make decisions that are safe and fair for the people of Ohio.”

Meanwhile, City of Columbus Mayor Andrew Ginther has described the Ohio Senate overriding of Governor DeWine’s veto as “reckless”.
“The legislature’s override of Gov. DeWine’s veto is reckless and puts the health of all Ohioans at risk. We are making incredible gains in the fight against COVID-19, but the legislature is undermining our collective sacrifices, and our health and well-being, all to score political points. Their actions are misguided and shortsighted and will severely limit the ability of public health officials to manage this pandemic and future public health emergencies. It is beyond disappointing — it is dangerous.”