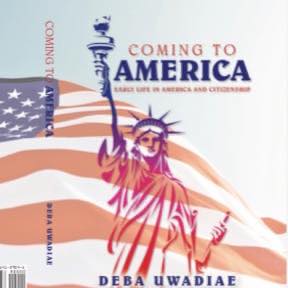 Columbus, Ohio-based publisher of New Americans Magazine, Deba Uwadiae has announced the release of his book, “Coming To America: Early Life in America and Citizenship” on online book outlets including Amazon, BarnesandNoble and Xlibris.

“Coming To America is a realistic experience of early life in America from the very first day in the land of the free through the process of normalizing residency, desperate search for job, affordable apartment in a secured environment, acclimatizing with the four seasonal weathers and the actuality of becoming an American citizen,” said Deba Uwadiae.

“It is a well-documented chronology of the life of a family of five from Lagos, Nigeria, West Africa who migrated to the United States in 2011 on the platform of the U.S. Diversity Visa Lottery program to liberate themselves from a raging economic storm, unsafe and chaotic environment and an unpredictable education for their children.”

According to him, “Coming To America became a new beginning but a predictable and stable climb up to the dream of an accomplished life and the attainment of the American Dream.”

Deba Uwadiae is an international journalist, author, global analyst, consultant, publisher and Editor-in-Chief of the New Americans Magazine. He is a member of the Ohio Legislative Correspondents Association, OCLA.