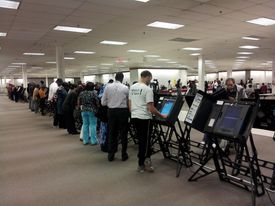 Joe Biden has defined the upcoming election as “the battle for the soul of America.” It is questionable if America has only one soul. The reality is that America has many souls and diverse manifestations of its prevailing norms.  The country was born with a soul that professed that “all men are created equal.” Yet, Blacks were considered 3/5th human and not worthy of personhood or American citizenship, a soul that disenfranchised all women and thrived on white supremacy.

The 2020 election is the battle to save a flailing democracy

So, the question is, which of the souls of America will survive after the 2020 elections? The good, the bad, or the ugly?

The 2020 presidential election is a choice between two starkly different candidates and souls.  There is no nebulousness between their temperaments, intellectual depth, or leadership styles.

This election is not a choice between two evils, and then opting for the lesser evil. There is no moral equivalence between Trump and Biden. It is a choice between good and evil, morality and amorality, religious freedom, and religious terrorism.  It is a decision between decency and boorishness, respect for women and misogyny, science and ignorance, facts and conspiracy theories, unity and division, apathy and empathy, racism, and tolerance.

This election is a choice between Biden, a man who has been in politics for over 47 years, who served honorably as vice president for eight years, and none of the people who worked with him have criticized or said he is unfit to lead. Trump, who has been in politics for less than five years, served as president for less than four years, and many who served under him have described him as a national security threat, unfit to lead, and a president who divides the nation.

This coming election is a binary choice between a curator of chaos and one with a steady hand.   A president that wants Americans to learn to live and die with a virus he called a hoax and a former vice president who wants to follow scientists’ recommendations and treat the virus as an existential threat that it is.

The 2020 presidential election presents a choice between transparency and corruption; a candidate who has released 22 years of tax returns and a president who has used all available machinery to hide his tax returns.

When confronted that he only paid $750 federal income tax in 2016, Trump untruthfully responded that it was because he had overpaid his taxes in advance years prior.  It should be noted that the Internal Revenue Services, IRS issues refund of overpaid taxes at the end of each year’s filing period.  Thus, it would have refunded all excess taxes paid in advance, if any. Trump also claimed that the $750 was a filing fee. Meanwhile, the IRS does not charge filing fees.

We have a human rights violator who splits families seeking refuge or asylum in the United States by physically separating children from their parents and denying them due process under the law.  This week, CNN reported that the administration has not been able to find parents of 545 children in its custody after separating the children from their parents since 2017.  Some of the parents have been deported without their children, and they may never reunite.

The Trump’s administration has inflicted worse pain and trauma on these families than the adversities from which they were fleeing. On the other hand, we have a candidate who used his platform in the Senate to advocate for the rights of black South Africans during apartheid in South Africa.

This election will determine whether or not this American experiment will survive the anti-democratic bombardments it has been sustaining for the past four years.  The results will show us which of its souls Americans want to embrace in the post-pandemic world.  As Americans go to the polls, each vote will determine the survival, or the collapse of a nation rampaged by a virulent pandemic and a pandemonic president.
(Emmanuel Olawale is a Columbus, Ohio-based Attorney. He could be reached at Emmanuel@olawalelaw.com)