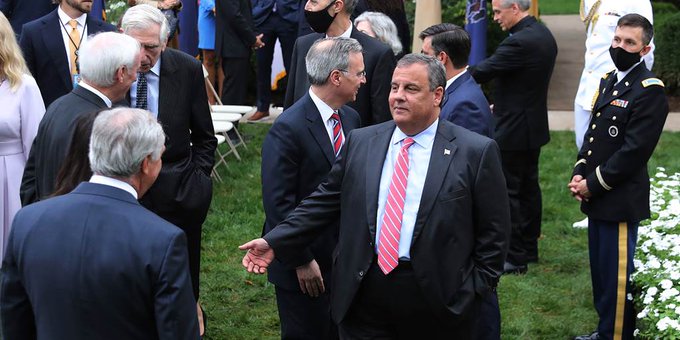 Former New Jersey Governor Chris Christie has urged Ohioans to continue to listen to Ohio Governor Mike DeWine on what he has been telling them on observing all the protocols required to combat the spread of coronavirus based on his experience from surviving the infection.

“I thought I was safe, but I was wrong. I got tested every day when I walk into the grounds of the White House for the four days that I was I was doing debate preps for President Donald Trump.”

“At the event for Judge Amy Barret, I should have worn a mask. It’s not a partisan or cultural symbol, not a sign of weakness or virtue.”

“I thought I was safe, and I was wrong. I took my mask off, and I left it off for the time I was inside the White House gates.  Soon after I began to feel the freight train of symptoms.”

While in hospitalization, Chris Christie said, “I was in intensive care but in isolation behind two inches of a glass. The glass was so thick that you couldn’t hear the nurses on the other side of the glass. They would hold up a white board and will be giving instructions and questions that I had a white board to write back to them.”

“And when they came in they were in heavy PPE. You are just left alone with your thought,” he said.

Christ Christie noted that, “so little is understood that when you’re there, when you are going through it, the psychological effect that it has on you, and certainly had on me, that you start to think of life and death. It is like getting beaten up from the inside out.”

“I support what you are doing out. Governor DeWine has done a great deal for this in the last few months. You are all in my prayer. “

Meanwhile, Ohio Governor Mike DeWine has said that the “situation in Ohio continues to worsen. For my fellow Ohioans who have felt that until now this virus really did not impact their life or their family and that they would react when it was really serious — I say to them that the time is now.”

“We need you. We need you to be fully engaged in this battle. When you see today’s data, when you see how fast the virus is spreading, when you see that the virus has spread and penetrated deeply into virtually every county in the state, it’ll become clear we all must fight back.”