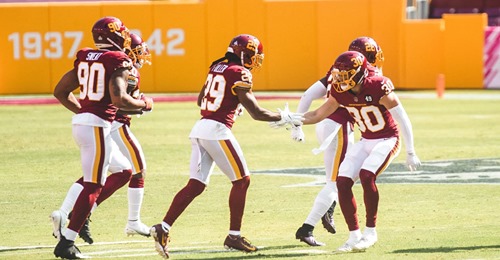 Kyle Allen would replace former Ohio State standout quarterback Dwayne Haskins. The starting quarterback in Washington came as a surprise to many.

Immediately following Ron Rivera and The Washington organization’s decision, many began to ponder why, just four weeks into the young season, Haskins lost his job as a starter. Was it strictly because of his play on the field? New coach, a new system that should allow the quarterback to grow within the system. Haskins outplayed Allen in the pre-season to win the starting job.

Hall of Fame quarterback Kurt Warner believes it’s based on what he’s seen strictly from Haskins on each step. He feels there aren’t enough positives to prove that he’s worthy of being a starter right now. “When I watch the tape, I am going to look at each play individually and say okay, what is the quarterback supposed to do on this play, barring breakdowns or issues other places,” Warner said on the NFL Network.

“I think the bottom line that I come to and the conclusion I come to is, Dwayne Haskins isn’t ready to be a starting quarterback yet in the NFL. “He’s still learning how to play the position,” Warner said.

I can’t entirely agree. Now I have never once played or competed for an NFL roster. Still, in my opinion, Haskins knows how to play the quarterback position and is worthy of being a starter in this league. The issues lie with him not having a chance to prove himself. Coach Rivera said, “Haskins is still learning the system.

” The same guy who won the starting quarterback job in pre-season over Allen, who coaches Rivera noted, has “been in the system for three years. ”

So far, Warner hasn’t seen that. He has noticed something that became a topic of debate after Haskins’s poor performance in week three against the Cleveland Browns, citing quarterback tends to stare down receivers when he drops back in the pocket.

New starting quarterback Kyle Allen will play this Sunday with the same group of wide receivers, the same running back core, and the same offensive line. If he goes out there and wins games, makes plays, and leads the team to the playoffs, the organization’s right decision, but if he does not help this team win games, let’s see what happens to him after a four-game span.

Keep your head up, young King, the best is still ahead.