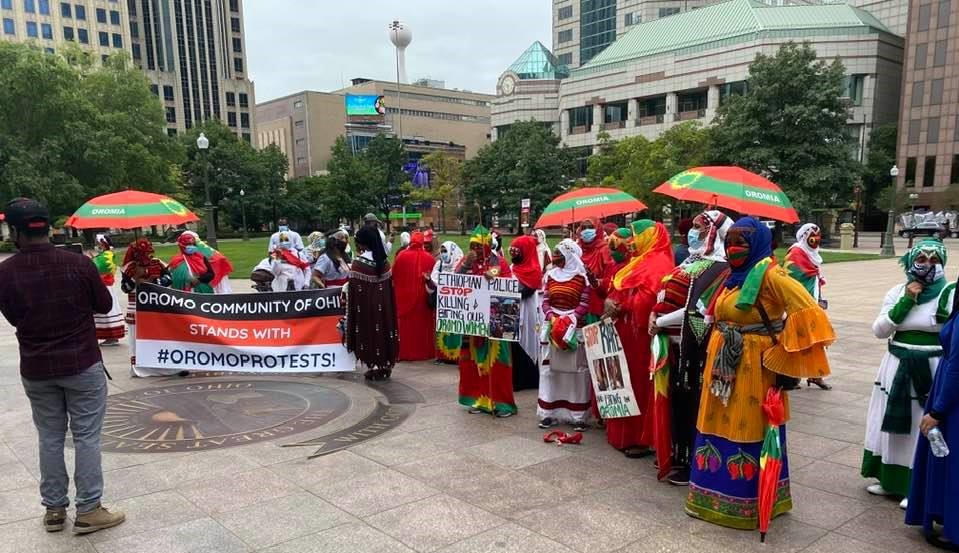 The women of Oromo Community in Columbus, Ohio have called for the release of all political prisoners and an end to the arrest and detention of Oromo activists in homeland, Ethiopia, Africa.

The women, at a demonstration in Statehouse, Columbus  to mourn the assassination of singer and activist Haacaaluu Hundeessa, said, “we are standing in solidarity with our sisters and brothers languishing in prisons in Ethiopia unjustly and demand for their immediate release without any precondition.”

A statement by the spokesperson, Urji Tahir said, “Oromo women are having to endure violence because of who they are and while their families and children are left to suffer.”

“Most of Oromo women prisoners are taken to unmarked detention centers and are not allowed to see their families or communicate their where abouts.”

“We demand, the safety and security of Oromo women and Oromo families as well as the immediate release of all Oromo Political prisoners.”

According to the statement,”we know hundreds of Oromo civilians have died while thousands are being arbitrarily detained in makeshift prisons across Oromia. Oromo women are facing direct harm to their bodies in the form of rape, torture, imprisonment as well as the emotional harm of watching their brothers, fathers and husbands being harmed. “

“These led to further kidnappings, imprisonment, torturing and raping of our women. Oromo women are being kidnapped by the Ethiopian military and taken back to their military camps. Their whereabouts are still not known.”

The Oromo women demanded that: