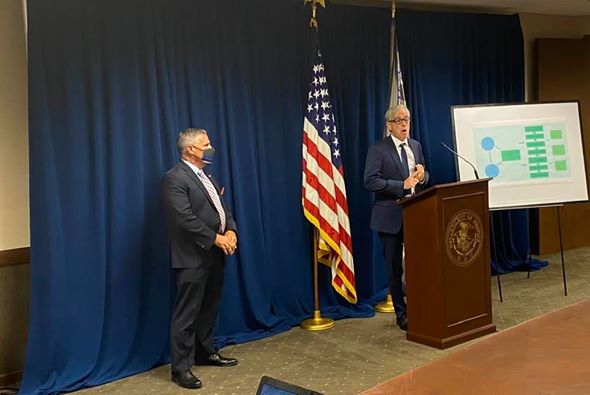 “This is a sad day for Ohio” was how Ohio Governor Mike DeWine described the arrest and a criminal charge against Ohio House Speaker Larry Householder, former chair of Ohio Republican Party, Mathew Borges, three other individuals and 501(c)(4) entity in a federal public corruption racketeering conspiracy involving $60 million.

Governor DeWine was joined by Lt. Governor Jon Husted and Ohio Senate President Larry Obhof to call for immediate resignation of Speaker Householder considering the enormity of the charges as disclosed by the U.S Attorney David DeVillers at a press conference in Columbus.

“I am deeply concerned about the allegations of wrongdoing in the criminal complaint issued by the U.S. Attorney’s Office.   Every American has the presumption of innocence until proven guilty.  Because of the nature of these charges, it will be impossible for Speaker Householder to effectively lead the Ohio House of Representatives; therefore, I am calling on Speaker Householder to resign immediately,” said Governor Dewine.

In his statement, Ohio Lt. Governor Jon Husted said, “As a former House Speaker, it makes me incredibly sad. With the announcement of today’s criminal complaints, the Speaker can no longer effectively perform his duties and should resign.”

Also, Ohio Senate President Larry Obhof said, “The allegations made today are very detailed, they are very serious, and they are very troubling to me, and undoubtedly, to the people of Ohio. Every member of the Ohio legislature has a sacred trust with the citizens of this state, and the people deserve the honest services of their elected representatives.”

“The seriousness and gravity of the allegations cast a dark shadow over the People’s House. It is clear that he cannot continue to lead the Ohio House of Representatives. He should resign.”

The Ohio Speaker of the House Larry Householder was arrested Tuesday, July 21, 2020 morning and charged in a federal racketeering conspiracy involving approximately $60 million paid to a 501(c)(4) entity to pass and uphold a billion-dollar nuclear plant bailout.

A statement from the U.S. Department of Justice, South District of Ohio said, “It is alleged that Larry Householder, 61, of Glenford, Ohio, and the enterprise conspired to violate the racketeering statute through honest services wire fraud, receipt of millions of dollars in bribes and money laundering.

Four other individuals also arrested and charged along Speaker Householder include Mathew Borges, 48, of Bexley, a lobbyist who previously served as chair of the Ohio Republican Party; Jeffrey Longstreth, 44, of Columbus, Householder’s longtime campaign and political strategist; Neil Clark, 67, of Columbus, a lobbyist who owns and operates Grant Street Consultants and previously served as budget director for the Ohio Republican Caucus; and Juan Cespedes, 40, of Columbus, a multi-client lobbyist.

The five individual defendants had initial appearances via video conference at 1pm July 21, at which time the case was unsealed.

According to the 80-page criminal complaint unsealed Tuesday, July 21, 2020, from March 2017 to March 2020, the enterprise received millions of dollars in exchange for Householder’s and the enterprise’s help in passing House Bill 6, a billion-dollar bailout that saved two failing, Ohio nuclear power plants from closing.

The defendants then also allegedly worked to corruptly ensure that HB 6 went into effect by defeating a ballot initiative to overturn the legislation. The Enterprise received approximately $60 million into Generation Now from an energy company and its affiliates during the relevant period.

As alleged, in February 2017, Longstreth incorporated Generation Now as a 501(c)(4) social welfare entity purporting to promote energy independence and economic development; however, the entity was secretly controlled by Householder.

As Clark stated in a recorded conversation, “Generation Now is the Speaker’s (c)(4).” Pursuant to federal law, the names and addresses of contributors to 501(c)(4)s are not made available for public inspection.

In March 2017, Householder began receiving quarterly $250,000 payments from the related-energy companies into the bank account of Generation Now. The defendants allegedly spent millions of the company’s dollars to support Householder’s political bid to become Speaker, to support House candidates they believed would back Householder, and for their own personal benefit.  When asked how much money was in Generation Now, Clark said, “it’s unlimited.”

The affidavit filed in support of the criminal complaint also alleges:

In 2018, the enterprise spent energy company-to-Generation Now money on approximately 21 different state candidates – 15 (including Householder) in the primary, and six additional candidates in the general election.

The Enterprise spent more than one million in fall 2018 alone to flood the airways with negative ads against enterprise opponents.  Most of these candidates won the 2018 general election. All who won voted for Householder as Speaker.

Money passed from the energy company through Generation Now was used to pay for Householder campaign staff, which would otherwise have been paid by Householder’s candidate committee, Friends of Larry Householder.

Householder received more than $400,000 in personal benefits as a result of the payments into Generation Now, including funds to settle a personal lawsuit, to pay for costs associated with his residence in Florida, and to pay off thousands of dollars of credit card debt.

The racketeering conspiracy as charged in this case is punishable by up to 20 years in prison.

“It takes courage for citizens to assist law enforcement in the ways detailed in the affidavit,” U.S. Attorney David M. DeVillers said.

“We are grateful to those who felt a moral duty to work together with agents in bringing to light this alleged, significant public corruption.”

“All forms of public corruption are unacceptable,” stated FBI Cincinnati Special Agent in Charge Chris Hoffman. “When the corruption is alleged to reach some of the highest levels of our state government, the citizens of Ohio should be shocked and appalled.”