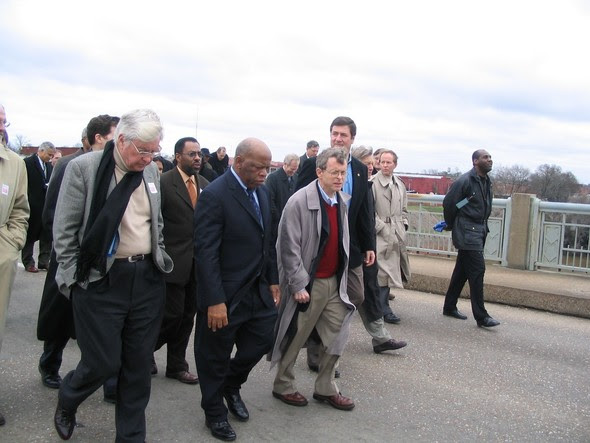 Ohio Governor Mike DeWine has described the late Congressman John Lewis as a man who changed America in his condolence message.

“Fran and I were very saddened to learn this morning of the death of our friend Congressman John Lewis.” Said Governor John Lewis.

“In 2004, when I was in the U.S. Senate, Congressman Lewis led a small group of lawmakers to Tennessee and Alabama and showed us history.  He opened our eyes with first-hand accounts of the abuse and prejudice he experienced.  He told us about his time as a Freedom Rider, when he and fellow activists were badly beaten while riding buses throughout the South to protest segregation.”

“He took us to the Rosa Parks Museum and the Dexter Avenue King Memorial Baptist Church, where Reverend King had been pastor and preached hope and perseverance.  We also walked with him to the Civil Rights Memorial, as he led us in singing “We Shall Overcome.”

“John also took us across the Edmund Pettus Bridge in Selma, AL, where on March 7, 1965 — known as Bloody Sunday — he and so many other civil rights protesters were attacked and beaten as they peacefully marched.

“Fran and I had taken our two youngest children, Mark and Anna, with us, and we will all be forever grateful to John for what he taught us on that journey.

“John Lewis was an extraordinary leader, teacher, and role model for us all.   He left a legacy for which we all have a responsibility now to carry on.”

Meanwhile, Governor DeWine has ordered that all U.S flags are flown at half-staff in public buildings and grounds in honor of Congressman John Lewis.

“In honor of the life and legacy of Congressman John Lewis and in accordance with the orders issued today by the President of the United States of America, Governor Mike DeWine has ordered that all United States and Ohio flags be flown at half-staff on all public buildings and grounds throughout Ohio effective immediately until sunset this evening.“