“That means we have to obtain these $775 million in cuts over the next two months,” said Governor Mike DeWine. 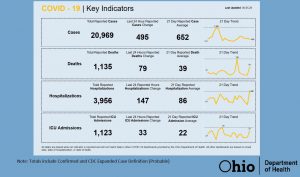 “In these two months, we are now below the budgeted estimates by $776.9 million.  As you can see this is close to a 1 billion-dollar swing downward in just two months.”

“Decisions like this are extremely difficult, but are part of my responsibility, as your governor, to make.  While we do not know what the coming months will hold, we do know that COVID-19 is here with us and will be here for quite some time.”

“Nevertheless, it does not exempt us from balancing our budget, which we are legally obligated to do.  Making difficult budget cut decisions now will help us down the road and will help us while we continue our discussions for the next fiscal year.”

He added that, “State agencies will continue to operate under the travel freeze already in effect, with exceptions for those staff providing direct response to the emergency. With regard to our state agencies, each of our agencies (with the exception of the Department of Rehabilitation and Corrections) is taking cuts, including the Governor’s office.”

“Regarding our state agencies, on March 23rd, I instituted an immediate hiring freeze for state employees in state agencies, boards, and commissions. I also ordered a freeze on pay increases and promotions of unclassified and exempt staff, and a freeze on new contract series for the state.”

“I have asked each agency director to continue to identify savings in their budgets for the remainder of this fiscal year and next fiscal year. Moving forward, all state agencies will continue the hiring freeze as well as the freeze on pay increases and promotions.”