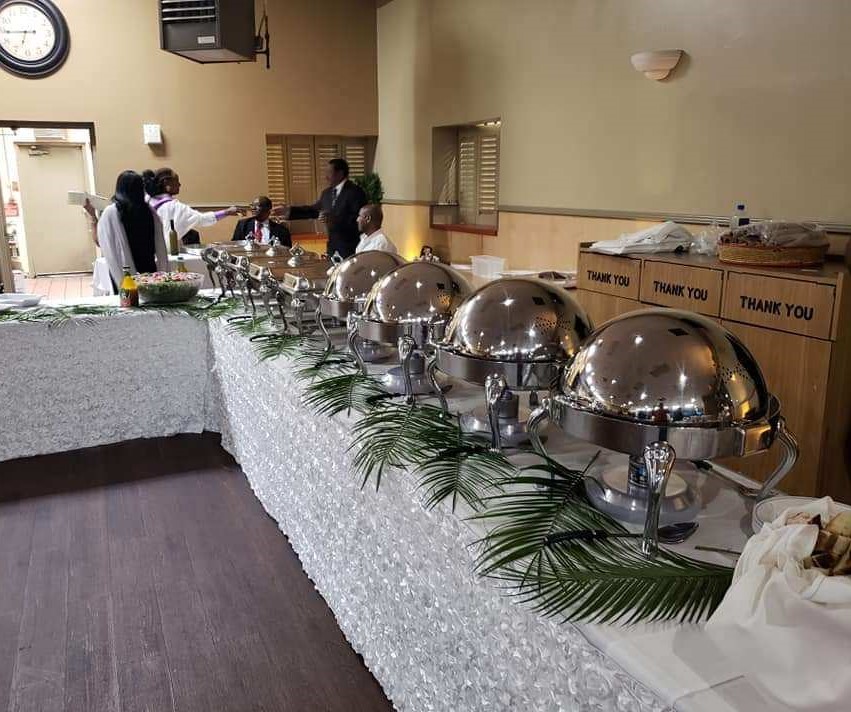 The Story of My Journey – Crispin Kamucici

On April 2016, Crispin Kamucici and family came to the United States as resettled refugees from Rwanda where they spent about 15 years as Congolese refugees. “We are originally from the Democratic Republic of Congo. We are a family of 12, including my wife Jacqueline and 10 children. 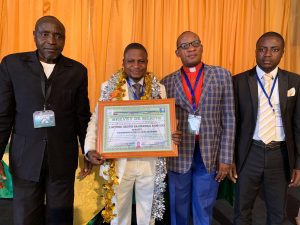 Three years ago, when I came to the United States, I set for myself short term and long-term goals. I thank God for everything he has made us to achieve so far.

Currently, four of our 10 children are in college, three are in high school and one in elementary school.

I came to the United States with Africa and the people on my heart; friends, family and all those who continue to struggle in our beautiful Africa.

Ten years ago, I asked myself why Africans suffer poverty, disease and all kinds of bad situation. I believed then that God wanted me to do something. I used to wonder if Africa was cursed. My dear continent is not cursed, it is rather the most blessed on the planet.

In July 2019, I went to Kigali Rwanda in Africa where we organized our first International Conference, the African Revival Awareness Conference. Seventy faith-based leaders, professionals, and scholars attended the three-day conference from seven countries including Burundi, the D.R Congo, Kenya, Tanzania, Uganda and the USA.

After the conference, I was awarded a Certificate of Merit from Vision Barza, an international Christian Organization based in Bukavu, DRC in recognition of the work Africa Arise Network is doing to inspire, empower and transform lives of our people.

In Cleveland, Ohio, through our Ministry, Shekinah Apostolic Ministries and Africa Arise Network, we reach the refugee community and other immigrants, especially those with limited English in eastern Ohio with the gospel and any other support.

As a member of the Social Services in the NAIC, New African Immigrant Commission in Ohio, I work closely with Commissioner Glory Brisset to help the immigrant community in my area by volunteering in certain activities.

The Story of My Journey – Julie Momoh

Julie Momoh, refugee from Liberia, was excited that her family was celebrating her 17th birthday in 1989. There was lot of food, drinks and local entertainers that added glamour to the birthday. Members of the extended family came from far and near. Never had any of her birthday been celebrated so “generously” by her father in Monrovia.  It was her birthday and a double celebration too! Unknown to Julie, who just joined her father from Nigeria, the lavish party was her marriage to one of her uncles, Abu Mohammed, who had other wives with six children. 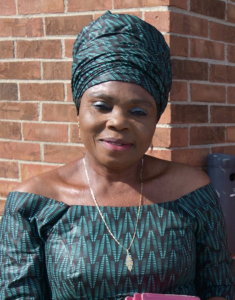 Few days after the wedding, Julie was back at her father’s house in Monrovia. “I ran away.” The father would not tolerate such effrontery and gave her two options of either going back to the husband who paid her dowry when she was a baby or to leave the house. Julie left home to her friend’s place to start a new life.

While working with the friend’s aunt in bar, Julie met a Police officer from the Lincoln town police station. They got married and had three children. Life was beautiful until an old neighbor saw her after her marriage to the police officer. He confessed his love for her and how heartbroken h was that she married someone else.

“I told him he never made his intention known then. He dragged me to a place with the intention of raping me. There were people that witnessed what happened because it was in the daytime. I reported him to my husband, the police arrested him, and he was put in jail.”

The first Liberian civil war broke out during this period. It became dangerous for Julie’s husband and the family to remain in Monrovia. They moved the three children to Julie’s parents’ home and headed for the village. While in hiding, according to her account, the former neighbor who was now out of jail, became a warlord, searched out their hideout and with his gang murdered her husband. She was abducted and assaulted for seven months. She was rescued and escaped to Monrovia.

By 1993, Julie again got married to another man. “He was a businessman that had a big store in waterside area of Monrovia. In December 1994, the same man came again with rebels in a jeep and kidnapped me while my husband travelled out for business. Our daughter was taken away during the commotion by our house help. I was taken to Nimba. The gang went to Monrovia to kidnap my husband too. They brought him and murdered him in my presence. I fainted. When people heard about it, a friend, Elizabeth Colly, reported to ECOMOG, the peace keeping force, who came and rescued me the second time.”

Not sure of the next attack and with the war coming to an end, Julie flew to a refugee camp in Cote d’voire where she became an entrepreneur, cooking and operating a video rental store while waiting to be processed to any country that will shelter her from the lurking enemies.

Thirty years after that “birthday” party and being on the run from the shadow of death, Julie Momoh found home in Columbus, Ohio in the United States of America together with a 14-year old son born in the refugee camp to a man that was too scared to marry her and who returned to Liberia while the child was still a baby.

“We left Abidjan, Cote d’voire on August 19, 2019 and arrived Belgium enroute Washington DC. We got to Columbus, Ohio the next day.”

Showing off her one-bedroom apartment, “we were brought to this beautiful apartment. America is a great country and what makes America great is that they are helping people.”

She desires to become a nurse and presently attending an ESL classes.

“I was almost giving up hope when America rescued me. I want to give back to America. I am appealing that America should continue to help. That is what makes America great. People are suffering in the refugee camps.”

Enat Restaurant on E Main Street, Columbus, Ohio opened in October 2019 occupying a space of 4,800 square feet and the kitchen is 1,100 square feet. Enat means mother in Amharic language in Ethiopia and the co-founder, Kirubel Mekuria told the New Americans that, “we want to be mother to all that come to Enat Restaurant. A mother gives her best to the children so that they can be happy and continue to trust her. That is what we set out to accomplish.”

Kirubel Mekuria, born in 1985 is a graduate of Economics and has a certificate in Hotel Management. He came to the United States as a refugee in 2013.

Rather than focusing only on the management of the family’s hotel business after graduating from the University in Ethiopia, Kirubel will spend time with the chefs and cooks in the kitchen learning how to cook and present the dishes like a professional. “I loved working with the chefs in the kitchen. It is a passion,” Kirubel said.

The upbringing became very handy on arrival to the United States as Kirubel combined jobs at a warehouse and several Ethiopian restaurants in Columbus. 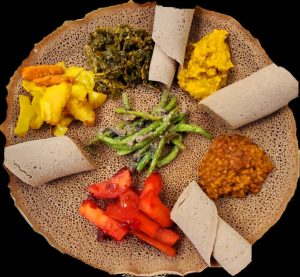 With the wife joining him in 2014, Kirubel rented a back space in Dire Stores for $1,000 monthly where he operated a restaurant serving the Ethiopian and other East African communities with food and catering services.

The Dire restaurant closed in 2016 when the property was bought by someone else.

Not deterred by the challenge, Kirubel started working from home and later joined another restaurant as chef making a deal of $2 per person if the restaurant provides outdoor catering services.

“I invested every earning I made from the deal into buying equipment for a restaurant of my dream.

Though I didn’t have a restaurant, I had so much equipment than most of the restaurants that I worked for. I was buying chafing dishes on regular basis from my earnings. That is where you put dishes during event. It cost almost $1600. Now I have about 24 of that. When you put money on productive stuff there is going to be a return on your investment. It is an asset. I started winning catering services for weddings and parties. People started ordering.” 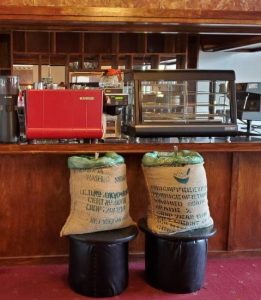 In 2018, Kirubel, the sister, Addis Elenio and the husband decided to team up to start a restaurant that will cater for international clientele. After searching for a right spot and sourcing for funds, they found a place in 2019 on E Main Street, Columbus.

“I want people who come to the restaurant to feel they came to a home, safe and enjoy something delicious,” said Kirubel.

Commending the American environment that made it possible, he said, “I am grateful for the chance this country has given me to make my business and live my dream. I want Americans to know that I am working and that I am not taking advantage of the country. I am contributing to the economy and creating employment. The immigrants are contributing a lot to the economy. We work the lower level of the jobs, and if they push everybody out who will do the jobs. Diversity makes America very colorful with opportunity for everybody.”