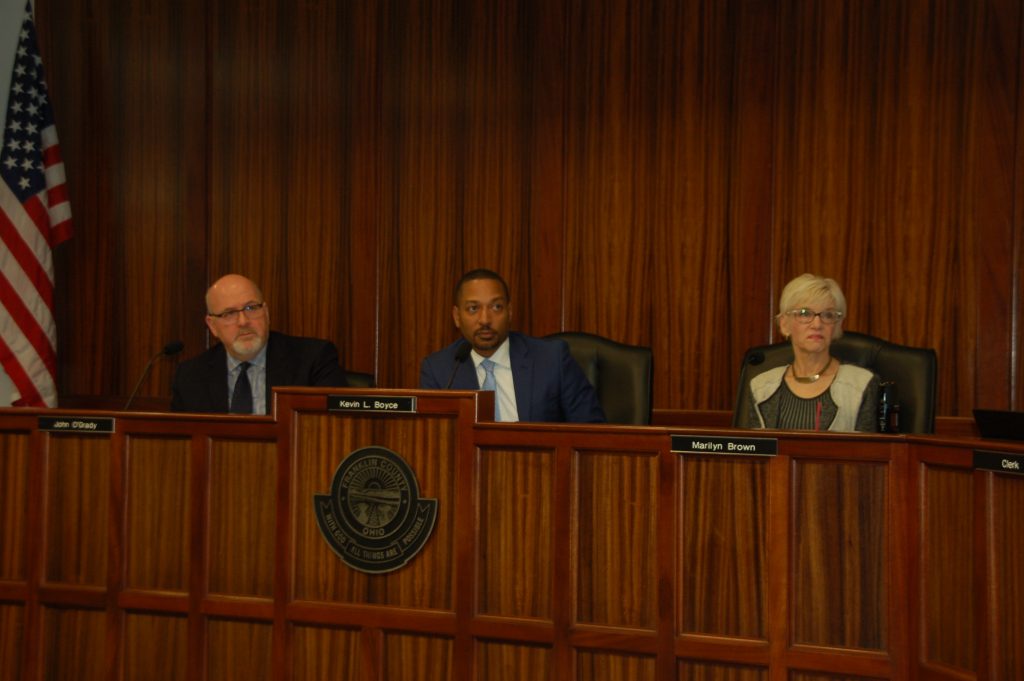 The Franklin County Commissioners has announced a new collaboration with the Columbus Partnership to begin to address poverty in Central Ohio in a systematic way, and following it with immediate action of raising their own employees’ minimum wage to at least $15 per hour.

The initiative began last fall with the gathering of a steering committee of local non-profit, government, business, community, and religious leaders and dozens of meetings with hundreds of local residents who are living in poverty.

The result is the Franklin County Rise Together Blueprint, which includes 120 goals and action steps to begin to address poverty more effectively.

The first steps of their new initiative will involve the creation of an Innovation Center to be housed at the Columbus Partnership and led by a leadership committee headed by Trudy Bartley of The Ohio State University and Matt Habash of the Mid-Ohio Foodbank.

The Innovation Center will begin immediately to take on three of the goals identified in the blueprint and to study the big idea of piloting universal childcare and early childhood education for Franklin County residents.

In 12 to 18 months, the commissioners envision the Innovation Center spinning off into a stand-alone organization to which they have committed up to $2.5 million in annual funding as well as to soliciting a similar amount from other sources.

In addition to the long term plan, the commissioners announced a number of immediate actions that they can take to start to move the needle on poverty, including community grants, funding the Forward Cities program announced in January, expanding their Building Futures job training initiative, and by raising their own employees’ minimum wage to at least $15 per hour.

“Franklin County is thriving in so many ways, but we know that a lot of our neighbors are just not sharing in that success,” said Franklin County Board of Commissioners President, Marilyn Brown.

“We can’t call ourselves a success or think that we’ve met our goals unless all of our residents have the opportunity to succeed.  We’re committed to leading in this area, beginning by supporting our own employees, and are challenging other local governments and large employers to do the same.”

The blueprint’s 120 recommendations are divided into categories to address four areas identified by the steering committee as key to helping provide economic mobility for residents: Jobs, Housing, Health, and Youth.

They include recommendations such as promoting innovative transportation options to connect neighborhoods of concentrated poverty with jobs by partnering with employers and economic development planners, and promoting the expansion of access to credit and financial institutions to support households exiting housing subsidy eligibility.

Some of the recommendations are for things that the county can work on directly, but many will require the coordination of a number of local governments and service providers, work that the Innovation Center can begin right away.

“Our partners in the business community are fully engaged in this project,” said Commissioner John O’Grady.

“The Columbus Partnership and Columbus 2020 have committed to this work for the long-term, and we will expect them to help fund it as we go forward.  I think they see that their own success rests on the success of the community in which they do business, and I know that they want to be good corporate citizens helping to move all of the residents of Franklin County forward.”

One key element of the blueprint that goes beyond the immediate actions the county can take and the long-term recommendations of the steering committee is a focus on race.

The steering committee and local residents highlighted issues surrounding racial equity as an unresolved barrier to success for many of the county’s residents.

The commissioners have said that they want to begin a community-wide discussion on the topic, and are beginning by contracting for Racial Equity training for some local government and non-profit partners, and that groups like Columbus 2020 have made a commitment to participate in the training as well.

“No plan, including this one, is ever going to ‘eliminate poverty’,” said Commissioner Kevin L. Boyce.  “But if we can start to reduce the degree to which somebody’s chances for success in life are predicated on their income, religion, skin color, or zip code, then I think we will have accomplished something important.”

The commissioners’ next step to rolling out the Rise Together Blueprint will be to host a series of community conversations introducing the plan to the community and soliciting feedback.