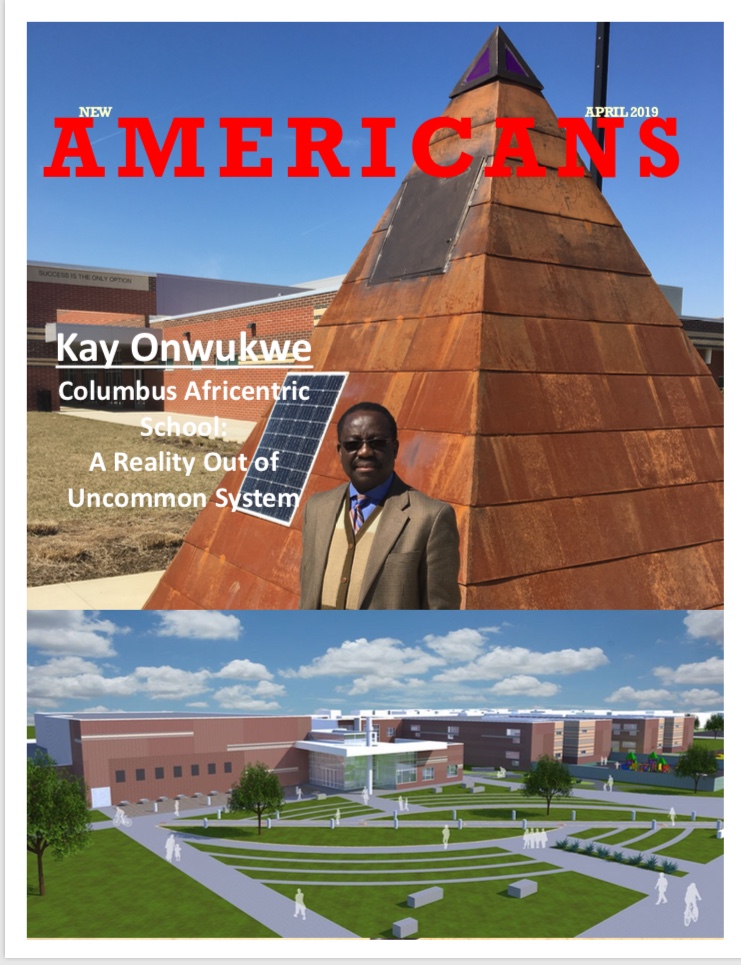 Kay Onwukwe, architect, artist and sociologist is the vice president, principal and lead designer of HKI Associates, Columbus, Ohio, an architectural firm he co-founded with Leon Humphries, President and managing principal in 1990. Kay was already an agricultural technology graduate in Nigeria when he came to the United States.  A gifted artist, Kay decided to study sociology and architecture at the Kansas State University where he graduated in 1983 and bagged a Master’s in City and Regional Planning in 1986. Having been part of many notable projects, Kay Onwukwe described the “massive” Columbus Africentric Early College as currently “the flagship project that I have done. It is also a flagship project of the City of Columbus Schools.”  Kay who moved to Columbus in 1984 and married with two children recently took Deba Uwadiae, Editor-In-Chief of New Americans magazine on a walking tour of the “urban campus concept.” 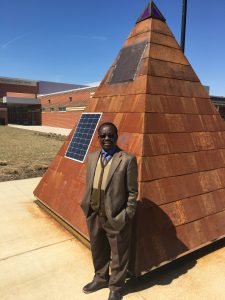 However, I have always been associated with the school doing a lot of mentoring and volunteering. That was why, when it was advertised that they were going to build a new school, I felt it was a great opportunity to actually present an Africentric-based perspective into the architectural design.

It was a great challenge. The name of the school being what it is, an Africentric, was a welcoming idea to the founder of the school, Charles Tennant. But in all honesty it was a challenge because it was a design concept that was not yet common in the system.

Being an African I was conscious of what we were going to do. We tried as much as possible to infuse African architectural concept into the design from the fabrics and the historical quotes on the walls. Instead of just being Africentric by name the intent was to make it a teaching school.

Everything about the school has to speak African.  That is from the bricks elevation articulation, the columns, the ceilings, the layout of the classrooms, colors and the arts that were selected and quotes and proverbs were all meant to actually be used as teaching tools for the students to get what it is to be Africentric. 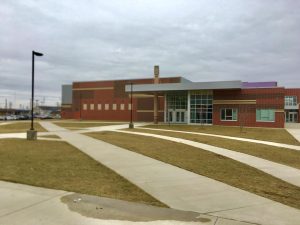 is site the onus was on the architects to think of how to restructure the building , and for us, instead of one mega structure, the idea was to make the building spread out into what I call an urban campus concept.

Based on that, we had to fragment the building into manageable visual masses. We created the athletic complex where we have the field house, the football field, the tracks, and tennis court.

The academic building is 1,600 square feet. It is a massive building. In order to minimize the impact of such a massive structure it was fragmented into villages. The villages are the classrooms for each grade. The school is from pre-K to 12 designed for a population of 800 students at that particular time and to grow to 1000 students eventually. By designing into villages each grade classroom was aggregated around a courtyard. Each grade is independently secured in case of emergency.

The exterior of the building was an opportunity to introduce African fabrics. There is an area called a feature wall – a massive wall as you enter the building where we used the quilt which is an African American fabric and the kente cloth from Ghana in Africa where the two merged. Here we see the African American in Diaspora and African History converges to create a unity and oneness. That is why it is a feature wall. The rest of the building is clothed in kente cloth. We used the bricks different colors and shape to articulate the kente stripes on the building. We were able to translate the same concept or treatment of the wall into the classrooms. The carpets on the floor have the same brick articulation.

This is the fourth year. The environment predestined how you behave. Though people tend to look at African American students as destructive, uncontrollable and undisciplined, I am ventured to say if there is an element of truth to that it is not manifesting itself here because the environment is telling them they have to behave, they need to take care of what they have, and they need to have pride in what is theirs.  So whatever is being said about African American students is not completely true. The entire school is quiet, it is not rowdy and no student is running around the hall way. The environment has a lot to do with the state of the current cleanliness of the complex.

I had opportunity to meet with former Interim Superintendent Dr. John Stanford. He asked me to walk through the school with him and tell him the inspiration and messages behind what he was looking at. At the end of the tour he said he was going to mention it to the Principal of the school that I should have a seminar and a talk through or presentation to the staff because they needed to know everything about the school so that they can actually teach the students about the school instead of using it as a building that is more than a building.

So I did an hour presentation to the staff last year and this year the parents asked me to do the same for them.  The administration is happy about this project.

Also, former Superintendent Dr Dan Good called me to say he wanted me to design a sculpture for the school and I am pleased about that.  That is the pyramid.

Architecture is what I have been doing for a while and it is a rewarding profession in the sense that you are creating an environment for people to use. You have to be cognizance of the people you are designing the environment for.

The building is designed in such a way not to be intimidating but to be welcoming. What will jump at people when they walk through the building will be the colors. It is intentional. Africans love colors. It was a conscious decision on my part to make sure I infused color into the building and also use the color as a way finding in the school so that you are not just looking at a monolithic or a monochromatic building; that the color you see outside is brought inside. Color does something to the mind and to the pride.

I will also feel that, it may not be easily apparent, but when the students find out that the building is designed by African American architects that may be a subtle message for students who will see it as an encouragement for them. I had an opportunity to talk to them. Currently, we have less than one percent African Americans who are architect.