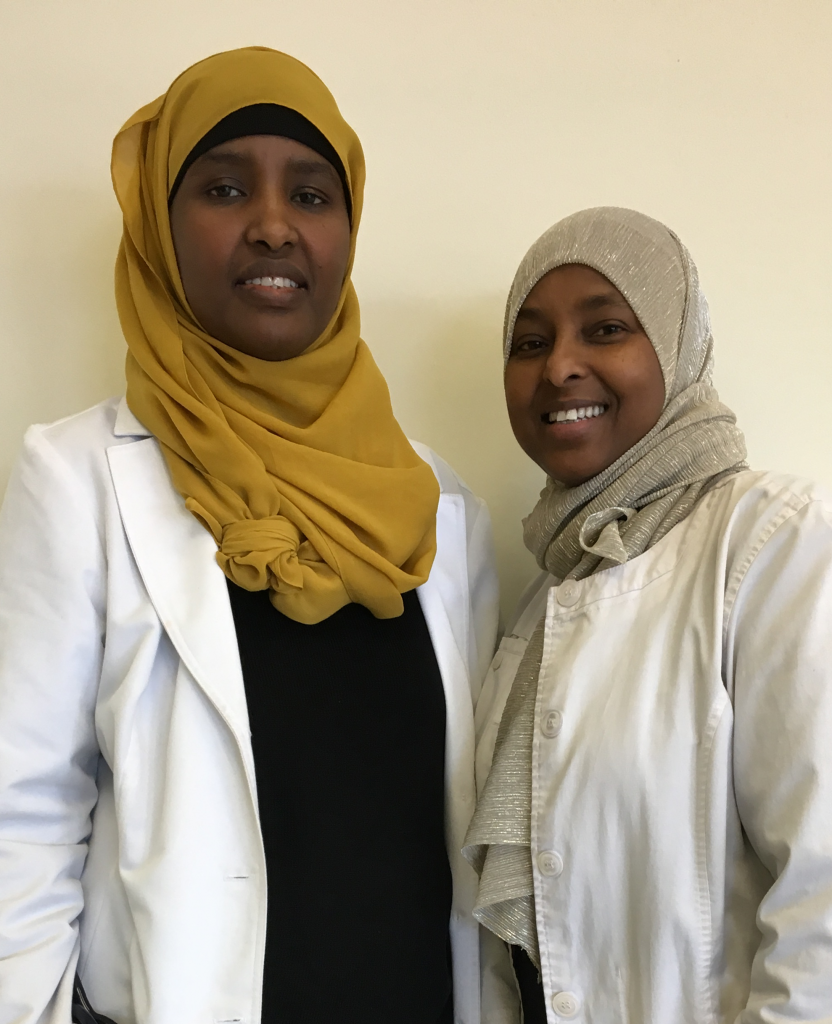 Displaced by war in Somalia, traversed countries for refuge, and challenged by the realities of their final abodes, Farhiya Shirwa and Amina Abdule never let go their dreams of becoming medical professionals. The two Nurse Practitioners in November 2018 opened a primary health care center, Medcare clinic, on West Broad Street in Columbus, Ohio, with a strong desire to solve the problems of “health disparities, the language barriers, and the lack of understanding of preventive health  care’” in the Somali community, and by extension the City of Columbus. The two share a combined work experience of 32 years. 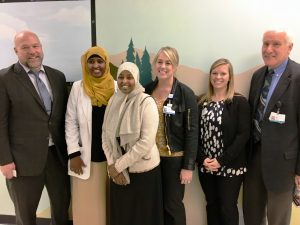 On Thursday, January 3, 2019,just as they finished hosting a five-man delegation from the Ohio Health led by the President Mike Reichfield  at Medcare Clinic, Farhiya and Amina spoke about their journey, dreams and Medcare Clinic with Deba Uwadiae, Editor-In-Chief of New Americans magazine.

They were brought together by fate through advocacy.

“Farhiya and I met long before Medcare Clinic. We met through the Somali Nursing Association which she actually founded in 2008,” according to Amina who came to the United States in 2000 after spending six years in Canada where she first trained as a nurse.

In her first move into advocacy in 2008, Farhiya, who came to the United States in 2004, set up the Somali Nurses Association of America.

“My vision was to unite all Somali nurses in Columbus, Ohio so we can do community teachings, share our struggles, successes, and which school to go and then to give back to the community. We organized regular lectures at the Somali Community Associations’ center on Cleveland Avenue.

“I met Amina during that time and we worked at the Riverside hospital at the same time. As our friendship grew we decided to go to Nurse Practitioner school. She was accepted at Otterbein University and I was accepted at Mt Carmel, and we were studying together. During that time, I went to Minneapolis, Minnesota and I saw a primary health care clinic, Axis Medical center, which inspired what we have as Medcare Clinic today,” Farhiya disclosed.

The two friends, who, eventually, graduated with Master’s of Nursing Degree in Family Practice in 2015  from their schools said planning for Medcare clinic took five years.

Farhiya Shirwa was born in Somalia but raised in Kenya because of the civil war. She came to America in 2004. She attended University of Cincinnati and graduated with a Bachelor of Science in Nursing. Raised by a mother with midwifery background, Farhiya wanted to become a medical doctor.

“My passion was in health as in main, but when I came to America, I didn’t have someone to lean on and to guide me through high GPA but because I didn’t have that role model I kind of went other direction.

Now that I am a Nurse Practitioner, I feel that God has chosen this path for me and I love it. I love being a nurse and my journey has and will always be in nursing.  I am going to finish my doctorate degree in nursing and will still be a nurse regardless of what I do”.

Farhiya’s first job was “in labor and delivery” at the University of Cincinnati hospital. “Cincinnati didn’t have a huge Somali population so we felt a little bit lonely and so we moved to Columbus.  When I came to Columbus, I launched my nursing at Riverside hospital where I did Neuroscience ICU (Intensive Care Unit). I also worked in home health care, urgent care and family practice.

At the same time the war was raging in Somali, Amina Abdule moved with her parents to Kenya. But as a teenager in 1994, she traveled alone to Toronto, Canada to join her uncle.  Not able to speak English, she spent the first two years to learn English as a Second Language and to obtain a high school diploma.

“I always liked to be in the health care. When I was young in Somalia, I always thought I will be a medical doctor. But when the war started in 1990 that made us to leave the country and we moved to Kenya. We spent about three years in the refugee camp and I left from there to Canada.

Schooling in Canada was challenging for the young Amina, especially venturing the path to medical profession. “I sat for exams to multiple colleges without positive results. But luckily I applied to a college outside Toronto, Mohawk College, Hamilton, Ontorio and was accepted.

“I remember going to the School library every day and will stay till closing. I was the only minority in a group of 12. They gave us three years to complete the program but only two of us graduated within two years and a half.”

In 2005, Amina went to Capital University, Columbus for her Bachelor of Science degree in Nursing. “I was taking part time classes because of my children. School was in the evening and I graduated in 2009.”

On their project, Amina said, “the idea of Medcare came when we were at the Nurse Practitioner school. We talked about it and through our experience we realized there are a lot of Somalis in the community. Seeing the health disparities, the language barriers, and the lack of understanding of preventive health care, we thought it would be nice to have a clinic where these can be taken care of. When you talk to them there are a lot of trust issues.  For example when they are in labor and some things come up during such time, they will say ‘oh they are rushing me. I don’t want to have a cesarean operation.’ There are many events that they have issues, and because of that they can end up in a bad situation. We thought as Somali speaking providers, we can make a difference. We know it will be challenging but they will understand with adequate explanation.”

In the same vein, Farhiya described Medcare clinic as “a community health center that caters for patients, empowers patients and makes patients active participants of their health.  It is a center that is meant to be a role model and cater to all communities not only Somali community but the Spanish community, the African American community, the Caucasian community and everybody in Franklin county. When someone says Medcare I want to think of it holistically. I want them to look at the fact that we are there to care for the whole person; care about body, their spirit and mental health.”

They described the response from the public as very encouraging. “The patients that are already here, we are grateful that they came. We will do our best to help them and do all we can do for them. For those that have not been here we want them to come and see what we are doing and see how we function. If they are looking for primary health care, we are open and here for them.”

On the visit by the Ohio Health leadership team, Farhiya said, “it was a joy for me knowing that we have a major hospital really interested in working with us. We are primary health care facility. We are seeing from children to adults, women to men. The clinic is open to all races, religion and all social economic status. We are ready to network and collaborate with everybody out there who can add to the success of Medcare. I envision the future of Medcare to be one of its kinds, a successful clinic that really works the talk and makes a difference for Ohioans and the Franklin county residence.”