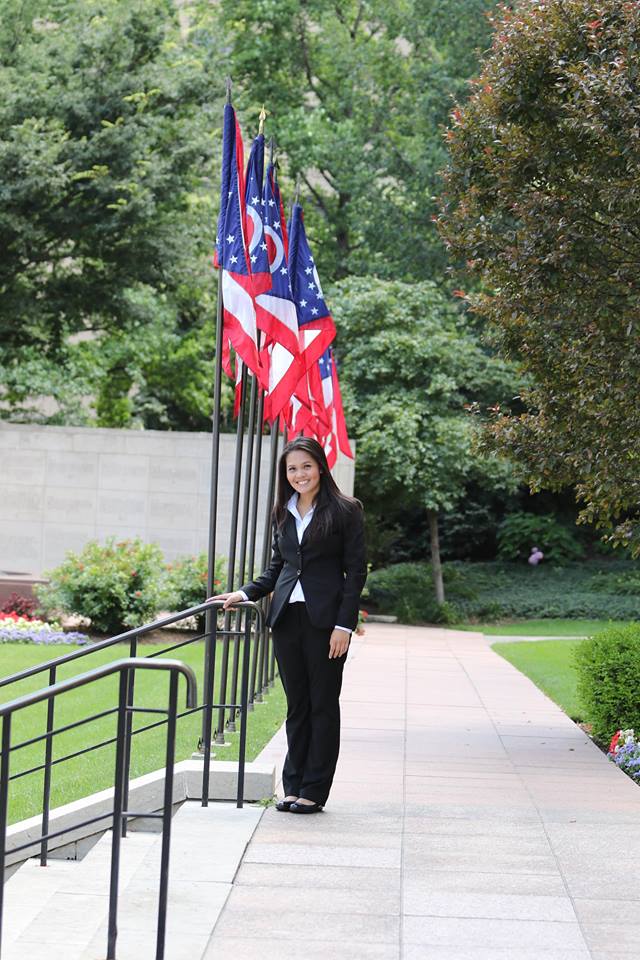 Sunday, July 16, 2017, Tina Maharath informed me that she will be running for the “State Senate in the 3rd District!” It was a “Wow!” response. Not for anything but the fact that a 26-year-old would want to start a competitive political office from the highest legislative body in the State of Ohio.

My reply was “I will be ready to publicize your interviews and events.” And she replied, “Sounds good!”

Now Senator-elect Tina Maharath, 27, born and raised in Whitehall, Ohio to refugee parents from Laos, Southeast Asia went into the election “more confident to take the next step for a seat in the state senate and lead this state into the right direction for our next generation,” she told New Americans magazine in an interview.

Tina Maharath contested the November 6, 2018 general elections against an experienced state legislator, Representative Anne Gonzales, Republican, defeating her by 66,438 to 65,733.

The Columbus Dispatch daily newspaper in an editorial tagged the victory as “odd defying victory” and had earlier reported the result as “unlikely victory in Ohio Senate race.”

Why was it a surprise? The opponent was said to have spent close to $1million dollar on adverts against her while Tina was barely noticeable in the media during the campaigns.

She told New Americans that she raised enough “just needed to print materials with my name on it. Nothing else!”  Yet she won!

Though she didn’t get the party’s endorsement, “No not at all,” but she told friends that she has “forgiven all.” Also the Senate Minority Leader Kenny Yuko, Democrat -Richmond Heights, has congratulated her on the win and welcomed her to the caucus.

Tina Maharath, currently holidaying in Bangkok, Thailand, Asia when asked how she responded to the victory said, “I didn’t know how to respond because it was 4:30am in Thailand and I was half awake, half asleep so I couldn’t accept it yet because I didn’t know if it was a dream or reality.”

But when the calls from friends, the media and announcement of the result continued to rain in on her in Bangkok, it actually dawned on her that it was a reality and that she has won the Ohio Senate race for the 3rd District which comprises New Albany, Gahanna, Westerville, Reynoldsburg and Groveport and part of western Columbus.

The single mother of “one son of school age” made history as the first American of Asian descent to be elected into Ohio State House of Assembly.”

She thanked her supporters for making it happen, “thank you for believing in me and thank you for your vote. You’ve made my American dream come true and now it’s time for me to help you make yours come true.”

“Don’t let someone else’s thoughts of you control your thoughts. If the opinions of   others control you, that means, everyone else can control you.”

On her experience during the campaign, Tina said, “I held back a lot of tears on the campaign trail running into old friends, mentors, and colleagues who watched me growing up throughout the years. We shared many memories that made me proud to run for office and to run for them. The tears came out because those people may or may not know that they’ve made so many differences in my life living in America as a child of refugees. Now it’s my time to give it all back.”

In her message, the Senator-elect said, “Continue to Vote for candidates that believe in your same values, not your party affiliation. Without civility in politics, we’re not able to have a pragmatic guidance for education, have science-based issues based on solid science instead of ideology, and we could have budgets and deficits addressed by taxation policies that harm the fewest and not benefit the wealthy.”

Speaking on the lesson learned during the process, Tina said, “Don’t let someone else’s thoughts of you control your thoughts. If the opinions of others control you, that means, everyone else can control you.”

Not really a greenhorn in activism and politics, Tina Maharath is a graduate of “Political Science. I also have experience working as an intern for the US Senate, an intern for the Ohio House of Representatives, and a Field Fellow for the Asian and Pacific Islander American Vote (APIAVote), along with various volunteer positions in the community.” Ohio Senate has 33 senators.