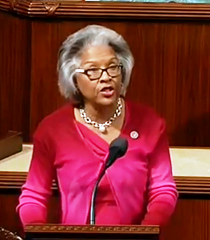 Congresswoman Beatty makes case for Mauritanians and others

Congresswoman Joyce Beatty, Ohio State District 3 U. S. House of Representative has raised the issue of ongoing separation of families on grounds of immigration policies as Congress adjourned two weeks early on September 28.

“Too many families in my district are being ripped apart, families like Edith Espinal’s and members of our Mauritanian, Somali, Latin American, and Central American communities.”

Reports in the community of refugees from Mauritania, West Africa indicate that some of those who routinely report at immigration facilities as required by law are being detained and repatriated to Mauritania where they are exposed to persecution from the government.

After three years of facilitating and coordinating a leadership academy for migrants and refugees in Washington DC for three years the Lutheran Immigration and Refugee Services, LIRS decided to take it to other states with Ohio State being one of the few states selected for the pilot.

To ensure the right community was reached the LIRS partnered with the Ethiopian Tewahedo Social Services, ETSS and the Bhutanese Nepalese Community of Columbus, BNCC for the two-day Ohio Migrant and Refugee Leadership Academy.

With the theme, “Making Ohio a Welcome State,” 20 community leaders were drawn from Columbus, Cleveland, Cincinnati, Dayton and Toledo and met from Monday, September 24 to Tuesday, September 25.

The first day was dedicated to workshops with remarks made by Congresswoman Joyce Beatty, Franklin County Commissioner Marilyn Brown and the Executive Director of ETSS, Dr Seleshi Asfaw.

A facility tour of the Statehouse was conducted in groups as group meetings were held with Legislative aides.

Organizations around the country looking for volunteers to help taxpayers

The IRS and its community partners are looking for people around the country to become IRS-certified volunteers at their free tax preparation sites. Volunteers can start now to join one of these programs that offer invaluable help to America’s taxpayers:

Tax counseling for the Elderly: TCE is mainly for people age 60 or older. Although the program focuses on tax issues unique to seniors, all taxpayers can generally get assistance. Last year, VITA and TCE volunteers prepared more than 3.5 million federal tax returns for qualified taxpayers at no cost. Anyone interested in volunteering can visit the sign-up page on IRS.gov.

The pioneering fellows of the New American Leadership Academy, Columbus, Ohio will begin classes on Wednesday, October 3, 2018 at the Columbus City Council facility on 1111 E. Broad Street from 5pm to 7.30pm.

The Program Coordinator, Abdi Soofe said that, “the program is an opportunity for New American professionals to foster personal development, enhance knowledge in civic engagement, and discover new ways to contribute to their respective communities and the Columbus community at large.

According to him, “fellows, will receive mentorship and professional development on various topics including government, civic responsibility, implicit bias, and others.

He added that, “the inaugural cohort of the Academy will begin on October 3rd, 2018 and end December 12th, 2018, with programming scheduled weekly or bi-weekly during this time.”

The Federal Emergency Management Agency (FEMA) in coordination with the Federal Communications Commission (FCC) will conduct a nationwide test of the Emergency Alert System (EAS) and Wireless Emergency Alert (WEA) on Wednesday, October 3, 2018 beginning at 2:18 p.m.

A statement from the Franklin County Emergency Management and Homeland Security said that, “the test will evaluate the operational readiness of the infrastructure for distribution of a national message and determine whether technological improvements are needed.

“The WEA system is used to warn the public about dangerous weather, missing children, and other critical situations through alerts on cell phones. It allows customers whose wireless provider participates in WEA and who own a WEA compatible wireless phone to receive geo-targeted alerts of imminent threats to safety in their area through unique tones and vibration,” it added.

The national WEA test will use the same tone and vibration. The test message will display “Presidential Alert” and read “THIS IS A TEST of the National Wireless Emergency Alert System. No action is needed.”

The WEA test will be sent through the Integrated Public Alert & Warning System (IPAWS), as part of the nation’s modern alert and warning infrastructure that automatically authenticates alerts. The test is intended to ensure public safety officials have the methods and systems that will deliver urgent alerts and warnings to the public in times of an emergency or disaster.

The Nigerian community in Columbus, Ohio will on Saturday, October 6, 2018 celebrate the 58th Independence Day of the country at the Gymnasium of St Matthias Church on 1582 Ferris Road, Columbus, Ohio. 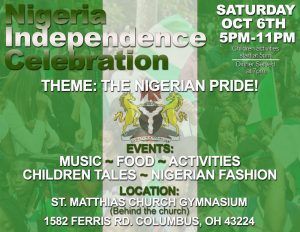 Chairperson of the Nigerians in the Diaspora America, Ohio, Ms Teresa Edoja said “it is going to be a lot of fun as there will be music, food, children activities, Nigerian Fashion and other side attractions.”